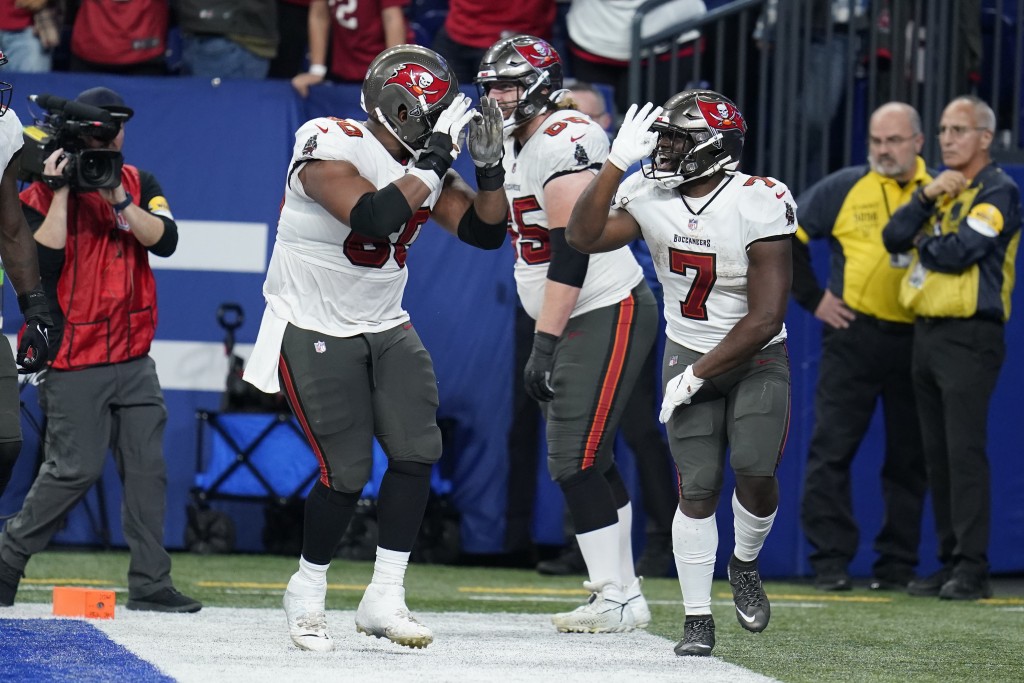 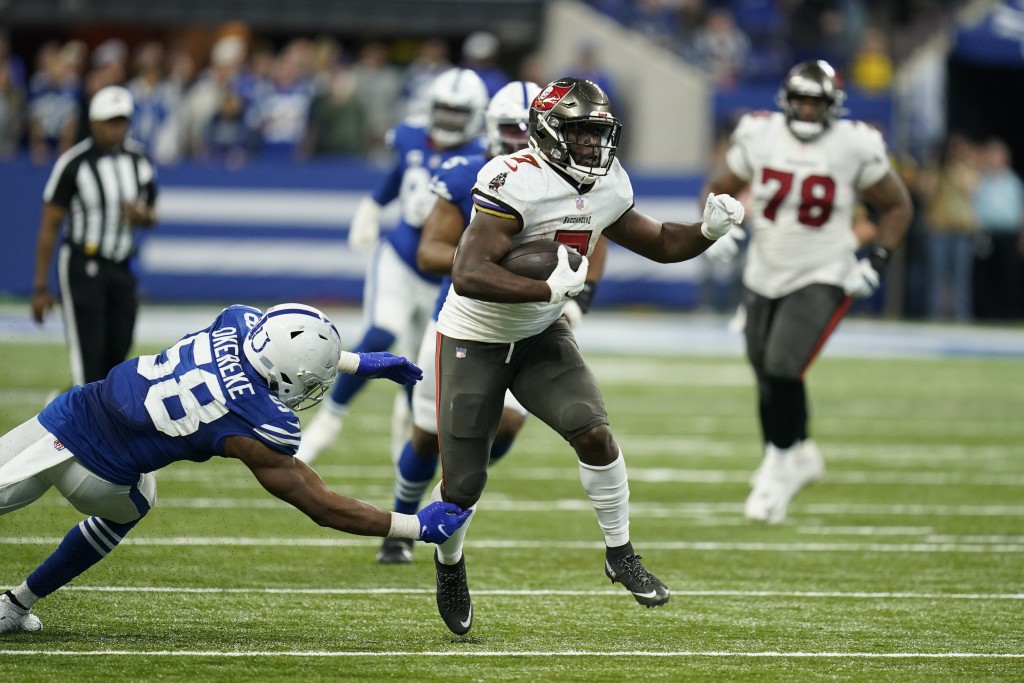 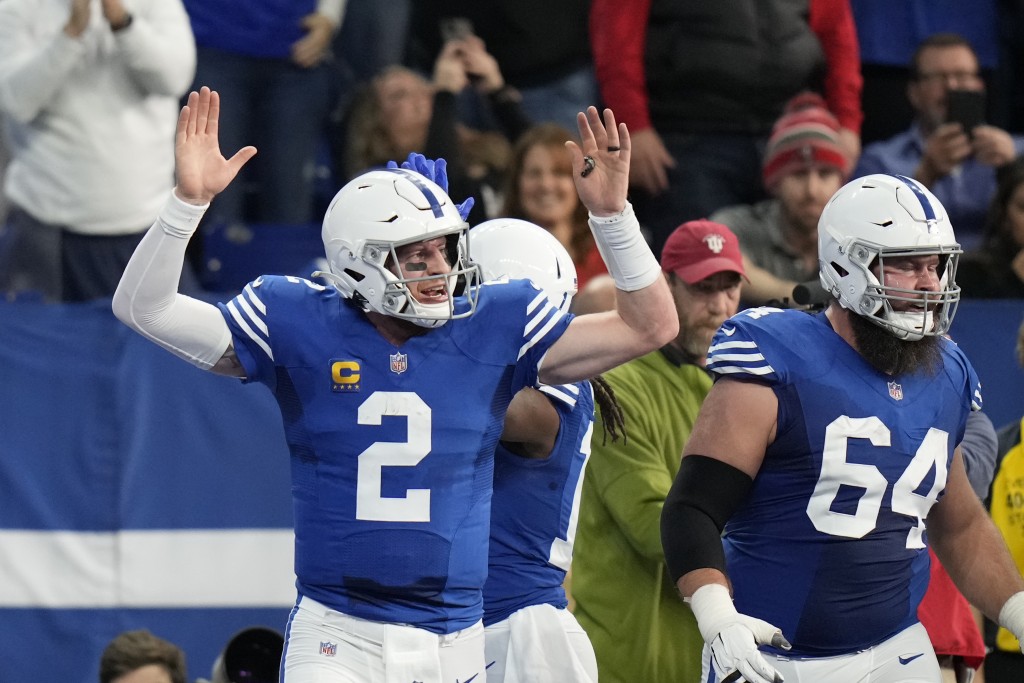 Tom Brady led the Buccaneers (8-3) on the eight-play, 75-yard tiebreaking drive after getting the ball back with 3:29 to go. Fournette rushed 17 times for 100 yards and three scores. He also caught Brady’s only touchdown pass.

The defending Super Bowl champs have won two straight overall while Brady improved to 16-4 all time against the Colts in his first appearance against Indy with Tampa Bay.

Indy (6-6) had a chance to force overtime when Isaiah Rodgers returned the kickoff 71 yards to the Bucs 32-yard line with 10 seconds left. But Carson Wentz’s first pass to Jack Doyle fell incomplete and former Colts cornerback Pierre Desir picked off Wentz near the goal line as time expired.

The Rams outscored Green Bay 11-0 in the fourth quarter, but their comeback attempt ended when Adrian Amos recovered an onside kick with 17 seconds left.

Rodgers went 28 of 45 for 307 yards as the Packers bounced back from a 34-31 loss at Minnesota. The reigning MVP threw touchdown passes of 7 yards to Randall Cobb and 5 yards to A.J. Dillon.

Rodgers, who didn’t practice all week, says he has a fracture of his pinky toe. The injury had caused him to practice just once in the week leading up to his 385-yard, four-touchdown performance at Minnesota.

The Rams (7-4) dropped their third straight game and continually made mistakes to create scoring opportunities for Green Bay, which scored 16 points off three Rams turnovers.

Matthew Stafford went 21 of 38 for 302 yards with three touchdown passes. But he also lost a fumble to set up a touchdown and had an interception returned for a touchdown. Stafford has thrown a pick-6 in each of the last three games.

BALTIMORE (AP) — Lamar Jackson provided one brilliant highlight during an otherwise subpar performance and his 13-yard touchdown pass to Mark Andrews in the third quarter was enough to lift the Ravens.

Jackson threw a career-high four interceptions in this mistake-filled game, but the only touchdown for Baltimore was memorable. Dogged by Cleveland’s pass rush all night, Jackson scrambled all the way back to about the 35-yard line before lofting a pass over the middle to a remarkably open Andrews in the end zone.

Cleveland (6-6) never could get its running game — which entered ranked No. 1 in the league — going against the Baltimore defensive front. Nick Chubb managed only 16 yards on eight carries, and Kareem Hunt had 20 yards on seven attempts.

Ravens coach John Harbaugh improved to 18-2 in prime-time games at home and 23-4 overall against the Browns.

CINCINNATI (AP) — Joe Mixon rushed for a career-high 165 yards and two touchdowns, Joe Burrow scrambled for a score and passed for another one and the Bengals swept the season series for the first time since 2009.

Mixon, coming off a rugged 123-yard, two-TD performance in a win over Las Vegas last week, pounded away for 117 yards in the first half. He helped the Bengals cruise to a third straight win over their AFC North rival after losing 11 straight in the series.

The Steelers (5-5-1) are winless in their past three games. The Bengals (7-4), dominated by Pittsburgh for so many years, have stamped themselves as a legitimate playoff contender.

Cincinnati scored on its first four drives, and former Steeler Mike Hilton returned an interception of Ben Roethlisberger for a 24-yard touchdown late in the first half to push the Cincinnati lead to 31-3 at the intermission.

The Bengals' defense kept Roethlisberger from getting any real traction until it was too late. He was picked off twice and sacked three times.

The victory snapped New England’s two-game skid against the Titans. The Patriots hadn’t beaten Tennessee since former Patriots linebacker Mike Vrabel took over as coach in 2018. New England (8-4) improved to 6-1 against AFC opponents this season.

Jones completed 23 of 32 passes for 310 yards. Kendrick Bourne had both of the Patriots’ TD receptions, finishing with five catches for 61 yards.

The Titans (8-4) stayed close early, but couldn’t survive a bevy of errors that included three fumbles by their running backs and an interception by Ryan Tannehill. He finished 11 of 21 for 93 yards and a touchdown.

Playing without star Derrick Henry for the fourth straight game, the Titans had mixed results from their rushing attack. Dontrell Hilliard and D’Onta Foreman became the first Tennessee backs other than Henry to rush for 100 yards since 2018. Hilliard carried 12 times for a career-high 131 yards and a 68-yard TD. But he also had a fumble in the second quarter that set up a Patriots field goal.

Foreman rushed 19 times for 109 yards and broke free for a 34-yard rush in the third quarter. But it, too, ended in turnover after he was stripped from behind by J.C. Jackson.

DENVER (AP) — Rookie Patrick Surtain II picked off Justin Herbert twice, returning the second one 70 yards for a touchdown. The Broncos’ big win sets up a showdown for the AFC West lead next weekend in Kansas City, where the game between Denver (6-5) and the Chiefs (7-4) already was flexed to Sunday night.

Surtain’s first interception came in the end zone on a pass intended for tight end Jared Cook early in the fourth quarter. The Broncos converted that takeaway into a touchdown when Teddy Bridgewater hit tight end Eric Saubert from 9 yards to make it 21-7.

His second one came off the hands of Austin Ekeler, who watched helplessly as Surtain cradled his second interception and sprinted down the Broncos’ jubilant sideline to push Denver’s lead to 28-7.

SANTA CLARA, Calif. (AP) — Deebo Samuel ran for two touchdowns before leaving with an injury and Elijah Mitchell ran for 133 yards and a score.

The matchup between two .500 teams fighting for wild-card spots was a highly entertaining one with six scores in the third quarter alone, including a 99-yard kickoff return score by Minnesota’s Kene Nwangwu.

But the 49ers (6-5) made just enough plays, including a fourth-down stop near the goal line midway through the fourth quarter, to win their third straight following a stretch of five losses in six games.

Jimmy Garoppolo threw for 230 yards and a TD, but the Niners once again did more of their work on the ground, with Samuel’s two scores making him the first receiver since the merger to run for five TDs in a season. Samuel had six carries for 66 yards and also caught one pass for 15 yards before leaving with a groin injury.

Kirk Cousins threw for 238 yards and two TDs to Adam Thielen for the Vikings (5-6).

EAST RUTHERFORD, N.J. (AP) — The Giants’ defense rose up to intercept Jalen Hurts three times and held Philadelphia to a season-low in points in beating the error-prone Eagles.

Daniel Jones hit Philadelphia native Chris Myarick with a 1-yard score and Graham Gano kicked field goals of 35 and 39 yards as the Giants (4-7) somewhat responded to the firing of offensive coordinator Jason Garrett by ending the Eagles’ two-game winning streak.

The Eagles (5-7) were their own worst enemy. They had four turnovers, with running back Boston Scott losing a fumble that Julian Love recovered at the New York 40 with 1:34 to play.

The Eagles had one more chance in the final 1:11. They got a first down at the Giants 27 and had to spike the ball. Hurts threw three passes and nearly had Jalen Reagor for a TD on second down with a sideline pass the receiver got his hands on before dropping. A pass to Reagor at the goal line on fourth-and-10 also was incomplete.

MIAMI GARDENS, Fla (AP) — Jaylen Waddle had nine catches for a season-best 137 yards and a touchdown, and the Dolphins forced Cam Newton into one of the worst statistical days of his career.

Myles Gaskin had two short rushing scores for Miami (5-7), the sixth team in NFL history to immediately follow a 1-7 start with four consecutive wins. Duke Riley blocked a punt that led to a score for Miami.

The quarterback matchup was totally one-sided. Miami’s Tua Tagovailoa completed 27 of 31 passes for 230 yards and a score. Newton was pulled in the fourth quarter after completing just 5 of 21 passes for the Panthers (5-7), who lost for the seventh time in their past nine games.

Newton finished with 92 yards passing, no touchdowns and two interceptions. It all added up to a quarterback rating of 5.8, by far the worst of his career. He did have Carolina’s lone touchdown, a 1-yard spin in the first quarter.

Jaelan Phillips had three of the Dolphins’ five sacks, and Nik Needham, Xavien Howard and Jevon Holland had interceptions for Miami.

JACKSONVILLE, Fla. (AP) — Cordarrelle Patterson scored twice in his return from an ankle injury, and the Falcons found the end zone and the win column for the first time in three weeks.

The Falcons (5-6) managed just a field goal in their previous two games, lopsided losses to Dallas and New England in which they turned over the ball a combined seven times and failed to score a touchdown in consecutive games for the first time since 1987.

They put an emphasis on playing “smarter football” against Jacksonville, and it paid off. It surely helped that the Jaguars (2-9) made all the early mistakes.

Patterson found a gaping hope up the middle for a 12-yard TD run. Patterson also had a 7-yard score on the game’s opening possession. He finished with 108 yards rushing and 27 more receiving.

HOUSTON (AP) — Zach Wilson threw for 145 yards and ran for a touchdown in his return from a sprained right knee, helping the Jets snap a three-game skid.

Wilson, the No. 2 overall draft pick in April who missed the last four games, was rusty early and threw an interception, but put the Jets (3-8) on top with a 4-yard scamper in the third quarter.

The Jets converted two fourth-down attempts on a drive that ended with a 37-yard field goal by Matt Ammendola that made it 21-14 with about 3½ minutes to go.

The Texans (2-9) hoped to build on an upset of Tennessee last week that ended an eight-game slide and looked good early. Tyrod Taylor threw two touchdown passes in the second quarter to give Houston 14-3 lead, but the Texans couldn’t do anything offensively after that.