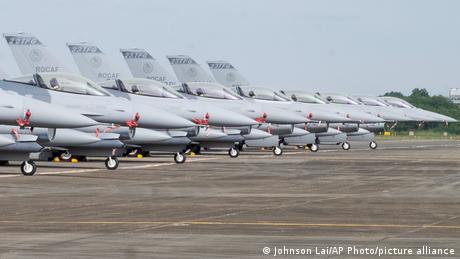 Taiwan's ADIZ is not the same as its territorial air space but instead is self-declared airspace that is monitored for national security purposes.

The latest ratcheting up of tensions comes on the heels of a US Congressional delegation to the island, the second this month in support of Taiwan.

China has vowed to take back Taiwan by force if necessary. Beijing disapproves of anything that lends international legitimacy and recognition to the government in Taipei and registered its disapproval of American lawmakers visiting the island.

What happened in Taiwan's ADIZ?

The Chinese air force sent 18 fighter jets, five nuclear-capable H-6 bombers and a Y-20 aerial refueling jet, suggesting China may have refueled mid-flight. The Chinese military is still working on its mid-air refueling capabilities as it seeks to project power around the globe.

In the map provided by the Taiwanese defense ministry, the H-6 bombers and six of the fighter jets flew south of Taiwan into the Bashi Channel separating Taiwan from the Philippines before steering out into the Pacific and returning to China.

Taiwan has complained for months of incursions into its ADIZ by China's air force, usually in the southwestern part near the Pratas Islands which it controls.

Why are tensions high between Beijing and Taipei now?

On Friday, a spokesperson for the Eastern Theater Command of the People's Liberation Army said the Chinese military carried out "naval and air force combat readiness patrol in the direction of the Taiwan Strait."

The spokesperson added, "The army will continue to be on high alert and take all necessary measures to counter, at any time, any interference by external forces and any conspiracy by separatists aiming at the so-called 'Taiwan independence.'"

Support for a free and democratic Taiwan is an area of rare bipartisan support in Washington.

On Thursday, the second US Congressional delegation in a month arrived in Taipei pledging support for lawmakers there. Led by Mark Takano, chairman of the House veterans' affairs committee, the US representatives met with Taiwan's President Tsai Ing-wen.

"Taiwan will continue to step up cooperation with the United States in order to uphold our shared values of freedom and democracy, and to ensure peace and stability in the region," Tsai said.