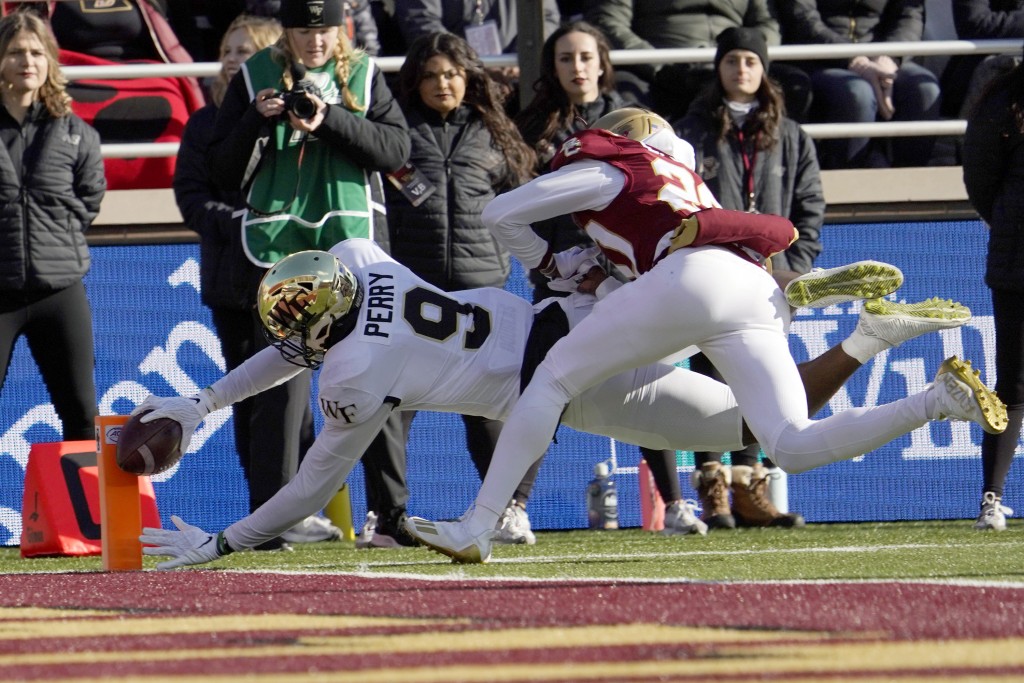 BOSTON (AP) — Wake Forest coach Dave Clawson had no complaints about sharing the screen on his postgame video call.

“Say hello to our new friend,” he said, holding up the ACC’s Atlantic Division trophy after the No. 21 Demon Deacons beat Boston College 41-10 to advance to the conference title game.

“We knew what was at stake. It was as big of a game as we’ve coached and played in," Clawson said. "We knew what we had to do.”

Sam Hartman threw for three touchdowns and ran for another on Saturday as the Demon Deacons earned the right to play Pittsburgh next weekend for the Atlantic Coast Conference championship.

It would be Wake Forest's first ACC title since 2006, which was also the only other time in more than a century of football that it has won 10 or more games.

“We’ve got a game next week, and our goal was to be the ACC champions,” Clawson said. “There’s still meat on the bone. There’s still a lot to play for. We’re happy, but we’re certainly not satisfied.”

While North Carolina State hoped for a BC win that would deliver the division crown to the Wolfpack, the Demon Deacons opened an early 14-0 lead and scored the last 24 points of the game.

With the backups in for a few final kneel-downs, Wake Forest players and coaches hugged on the sidelines before taking their celebration to the field. Clawson received the requisite ice water bath, then the players slapped hands with the fans behind their bench before posing for pictures in front of the goalposts and scoreboard.

“It was a cool moment to share with our fans, people that traveled or are here in Boston,” Hartman said. “It was a great moment for Wake Forest, and for our football team and the guys that have been here all year.”

Hartman ran it in from 7 yards out midway through the first quarter and made it 14-0 on a 33-yard pass to A.T. Perry. It was 17-10 late in the second when Brandon Sebastian intercepted Hartman in the end zone, but BC went three-and out and then Wake Forest scored on Hartman's 7-yard pass to Perry just before halftime.

BC (6-6, 2-6) ran off four three-and-outs in the second half — interrupted only by an interception. Wake Forest extended its lead with a field goal, a 3-yard run by Christian Turner that made it 34-10 and Hartman's 2-yard pass to Blake Whiteheart.

Phil Jurkovec was 3 for 11 passing for 19 yards for one touchdown and two interceptions, but he also led the Eagles with 66 yards rushing.

Wake Forest: The Demon Deacons snapped Clemson's streak of six straight Atlantic Division titles. They have only appeared in the ACC championship game once, beating Georgia Tech in 2006.

Boston College: The Eagles lost four straight games after Jurkovec sustained what was initially thought to be a season-ending wrist injury. Even after he returned, though, BC went 2-2. It did not beat anyone with a winning record all season.

Clemson and N.C. State also had a chance at the ACC title game entering the weekend. The Wolfpack beat North Carolina on Friday night to eliminate Clemson, but they needed a Wake Forest loss.

Wake Forest doesn’t look to make a major move, but that could change with a win over Pittsburgh next week.

The flu ran through the Boston College locker room during the week, with 32 players affected. Fifteen players, including Jurkovec, were out on Wednesday, forcing the team to hold a walkthrough instead of a regular practice.

Ten players were out of Saturday’s game, mostly backups.

On BC’s first possession of the second half, receiver Zay Flowers ran 73 yards on a reverse to reach the end zone, only to have the play called back for a blindside block thrown by Jurkovec against defensive tackle Miles Fox. Replays appeared to show the hit was legal, but the call is not reviewable.

“I’d just rather not comment on anything on the officials right now because I’d probably say something that I will regret,” BC coach Jeff Hafley said. “That was an unbelievable play, a good block, now you’re talking about a seven-point game and momentum on our side and it is a totally, totally different football game and not even close to what just happened.”

On the next play, Jurkovec threw a screen pass to Pat Garwo that was originally ruled a catch at the BC 14, the original line of scrimmage. The game was held up while the play was reviewed; the ball was determined to have touched the ground, meaning it was an incomplete pass and the ball was spotted — at the BC 14.