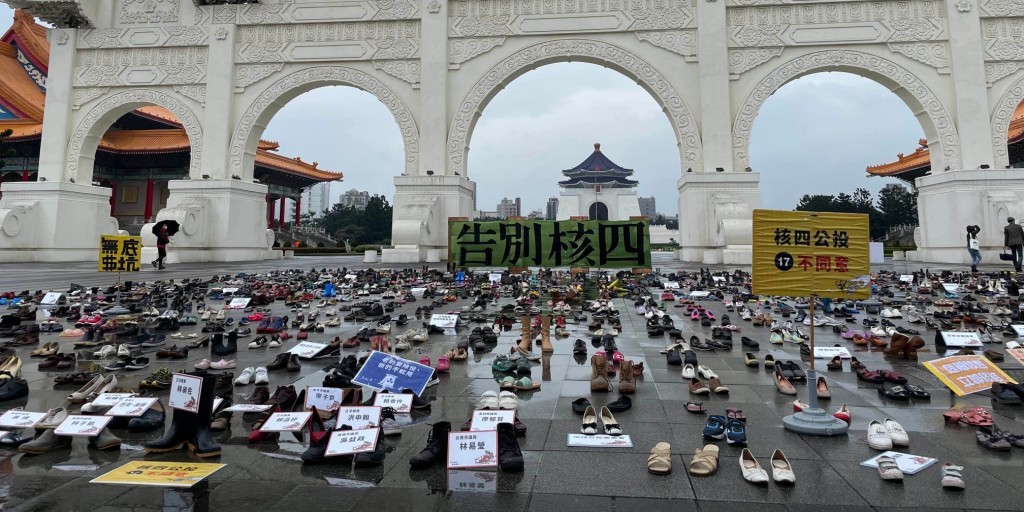 TAIPEI (Taiwan News) — No Nukes Taiwan launched a campaign to oppose nuclear power on Saturday (Nov. 27) and encourage people to vote “no” for each question in the four-in-one referendum on Dec. 18.

The group placed more than 1,000 pairs of shoes at Liberty Square in an event called, “Solidarity through shoes, oppose nuclear power,” to reject the referendum proposing the reopening of the fourth nuclear power plant in New Taipei City’s Gongliao District. The footwear symbolizes all the anti-nuclear demonstrations over the years, CNA reported.

The group also called on the public to vote “no” on plebiscites regarding U.S. ractopamine imports, algae reefs, and referendum scheduling. The event included members from the Democratic Progressive Party (DPP) and Taiwan People’s Party, as well as other politicians, who all donated shoes to the cause.

DPP Legislator Lai Pin-yu (賴品妤) pointed out the resumption of the fourth nuclear power plant is a non-issue, as its operational license has expired. Other countries have stricter nuclear safety regulations, Lai said, adding the Atomic Energy Council has repeatedly stated the power plant cannot be opened, according to CNA.

"If science will eventually prevail, then the fourth nuclear power plant cannot be restarted," the legislator said.

Cai Chung-yue (蔡中岳), deputy chief executive of Citizen of the Earth, Taiwan, pointed out the anti-nuclear group collected thousands of pairs of shoes in just two weeks. He said it represents the will of many Taiwanese and sends a powerful message that a nuclear-less future is the way to go.

No Nukes Taiwan will hold another event next week, during which 21 people will walk the 70 kilometers from the fourth nuclear power plant to Ketagalan Avenue. The number 21 was specifically chosen to represent the 21 boroughs in Gongliao District, per CNA.