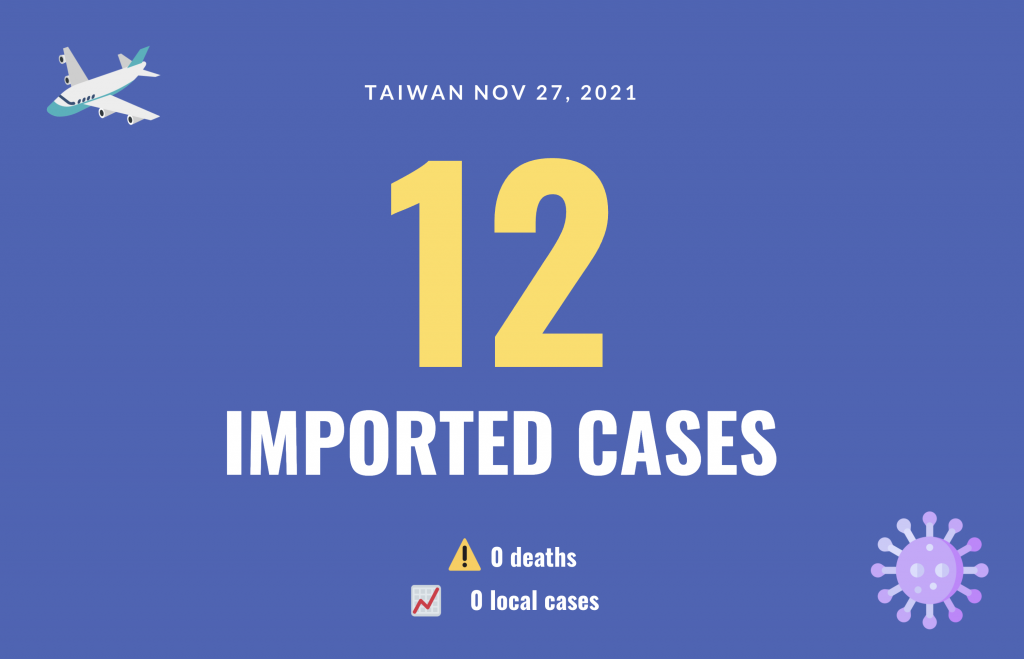 TAIPEI (Taiwan News) — Taiwan confirmed 12 new imported COVID-19 cases for the second day in a row Saturday (Nov. 27), with no local infections or deaths, according to the Central Epidemic Command Center (CECC).

The imported cases were eight men and four women between the ages of 10 and 69. Three had arrived from Ethiopia, four from Indonesia, two from Vietnam, and one each from the United States, India, and South Korea.

They had entered the country between Nov. 12-25, with only three Ethiopians and a Filipino man traveling from South Korea not having been vaccinated before. The CECC confirmed four of them as breakthrough cases, while two are still being investigated.

Taiwan’s latest total number of 16,578 coronavirus cases includes 14,590 domestic cases and 1,934 imported ones, with the death tally remaining at 848. Of the fatalities, 836 were the result of local infections, with New Taipei City registering 412 deaths and Taipei City 321.

Since the beginning of the pandemic, Keelung reported 29 deaths; Taoyuan 27; Changhua 15; Hsinchu County 13; Taichung five; Miaoli three; Yilan and Hualien two each; and Hsinchu City, Tainan, Kaohsiung, Nantou, Yunlin, Pingtung and Taitung one each. The 12 other deaths were imported cases.

A total of 36 COVID cases originated from last year’s journey by the Taiwan Navy’s "Goodwill Fleet," two were infected on board a flight, one case was classified as unresolved, and 14 cases were put under investigation. A total of 111 earlier cases were removed from the list of confirmed cases.