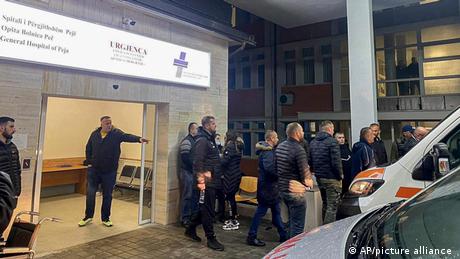 A bus driver and two teenage students were killed in Kosovo on Friday when an unknown assailant opened fire on a bus. Police said the attack took place in Gllogjan near the towns of Decani and Peja, 90 kilometers (55 miles) west of the capital city, Pristina.

The authorities were still looking for the suspect.

"We believe it was only one attacker and we are doing everything to find out what happened and find the suspect," rhe deputy head of police in Peja, Veton Elshani, told Reuters news agency.

What do we know about the attack?

According to police spokesman Fadil Gashi, a bus carrying a group of teenagers was attacked by a gunman with an automatic weapon around 18:00 UTC. The attacker is believed to have used a Kalashnikov rifle.

The driver of the vehicle was killed immediately while three teens were injured. They were taken to hospital where two succumbed to their injuries. The third teenager is reportedly in a stable condition. Later, some media outlets cited officials as saying more people were wounded.

The country's President Vjosa Osamni expressed her shock in a post on Facebook and called for police to act swiftly. "I invite law enforcement authorities to discover the perpetrators of the crime as soon as possible and bring them to justice."

Police say its "too early" to determine a motive for the shooting. However, several sources indicated that the incident was most likely not terrorism-related.

"There is no reason to believe it was a terrorist attack," Elshani said.