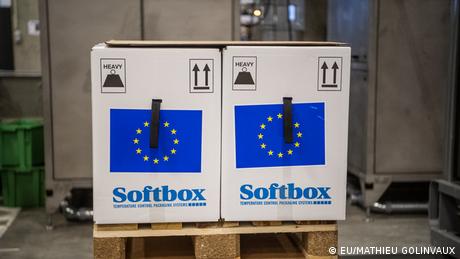 A new coronavirus variant is sparking panic around the world. Europe is once again battening down under a patchwork of rules, flight bans and vaccine rollout plans.

For campaigners who have spent the last year fighting for a more equitable distribution of COVID-19 vaccines, the news of a new, more dangerous variant was a disaster waiting to happen.

"What the science has been telling us all along is that if you have large populations that are unprotected from this virus, then it will mutate," David McNair, executive director for global policy at the ONE Campaign, told DW. "It's a tragedy that today we're seeing that come to pass," he said.

"Hoarding vaccines, not funding the global response, not supporting a TRIPS waiver — all these things have led to this situation. And the sad thing is that EU countries, North America, Canada and others had the power to change this a year ago and they chose not to," he said.

While almost 70% of adults in the European Union are fully vaccinated against COVID-19, most health workers in African countries are not.

Despite this gap, the European Commission spokesperson Stefan De Keersmaeker insists that the EU is "at the forefront of ensuring global solidarity with the rest of the world."

He pointed to the EU's joint pledge with the United States to vaccinate 70% of the world by September 2022 and the bloc being a major contributor to COVAX, the global initiative aimed at boosting vaccine production and supply to poorer nations.

"And then there is, of course, also the fact that we are the main exporters of vaccines to the rest of the world," he said. "We are, so to say, the pharmacy of the world on that count."

Only a third of pledged doses delivered

But when it comes to delivering on short-term commitments, the EU's big words and promises appear to be falling short.

The bloc and its members have pledged to donate 300 million vaccine doses to low- and middle-income countries by the end of 2021 — both through COVAX and bilateral donations. But so far, less than a third of those have been delivered, with just a few weeks until the end of the year.

Figures obtained by DW show that as of November 26, around 95 million donated doses had reached recipient countries.

So how did we get here?

Diplomatic sources told DW the bloc's member states are laying part of the blame for slow deliveries at the feet of vaccine makers.

"Most pharmaceutical companies don't want to take care of the logistics themselves," one EU diplomat, who asked not to be named, told DW. "They think it's up to the member state who bought the doses to send them on to the country that they want to donate them to. The problem is that these are complicated vaccines, with complicated cold chain delivery and storage conditions."

In a leaked letter to the European Commission shared by Reuters news agency and seen in full by DW, German State Secretary for Health Thomas Steffen also appeared to call out vaccine manufacturers.

"We are faced with ongoing bureaucratic, logistical and legal problems," the letter, dated October 18, reads.

"Manufacturers seem to take advantage of the Member States' contractual obligation to obtain their prior written consent to hamper vaccine transfers they deem potentially prejudicial to their commercial interests."

De Keersmaecker did not confirm receipt of the letter but told DW that discussions with pharmaceutical companies are underway. "We continue to follow the situation of the deliveries under our contracts," the European Commission spokesperson said. "This is a regular thing."

Vaccine makers deny any role in delaying donations. In a statement sent to DW, Pfizer said: "From day one of our vaccine development programme, Pfizer and BioNTech have been committed to fair and equitable access of our COVID-19 vaccine." The company said it was supporting EU efforts to deliver to countries in need.

Johnson & Johnson told DW it "firmly believes that inequitable access to COVID-19 vaccines will only prolong the pandemic" and urges governments with available vaccines to "immediately ramp up dose sharing."

The firm said it will "provide certain supply chain and logistical support to ensure donated vaccines can be delivered to recipient countries as quickly as possible."

AstraZeneca notes on its website that most of the doses it has manufactured have gone to low- and middle-income countries, while Moderna recently announced a new deal with the EU to deliver more doses of its vaccine to poorer nations.

And while the EU seems unlikely to reach its 2021 target, vaccine deliveries to poorer nations have shot up since summer.

Aurelia Nguyen, managing director of the Office of the COVAX Facility at Gavi, the Vaccine Alliance, told DW that though extreme vaccine inequity still exists, a new period "where supply is becoming more readily available for those countries that have been left behind" was beginning.

But, she explained, this brings into play "a new set of challenges."

Increased pledges may see the poorest countries with the weakest health infrastructure having to turn down donations, especially when vaccines are close to expiry dates or require complex storage and distribution methods.

Nguyen said efforts were underway to ramp up these countries' "absorptive capacity" to receive and roll out large numbers of doses,

Still, emergency flight bans imposed amid fears around the new variant may add fresh complications to vaccine deliveries, with batches of donated doses often being transported to African countries on commercial flights out of Europe. Fewer flights could spell fewer delivery opportunities.

In an emergency statement about the new variant, European Commission President Ursula von der Leyen on Friday called on EU citizens to " take every opportunity to protect themselves through vaccination," adding, "boosters provide even better protection."

But for Dimitri Eynikel, EU adviser at Doctors Without Borders, the mass rollout of booster shots could prove problematic both from an epidemiological and equality perspective.

Even before news of the new variant reached Europe, he said, countries were showing "reluctance to donate."

"With the new waves coming now, with countries getting an interest in booster doses — they are delaying donations. This is, for us, not the right approach."

"The idea should not be to give more and more doses to the same people."

David McNair of the ONE Campaign insists scaling up the global pandemic response is now more important now than ever.

"The risk is that countries do what they've been doing all along and say: We need to batten down the hatches, close borders and vaccinate our own citizens again. That's not going to solve the problem," he said.

"EU member states, in particular, need to step up to share their surplus vaccines," he said.

"If we don't do that, then we're going to be in the same situation in a number of months' time."