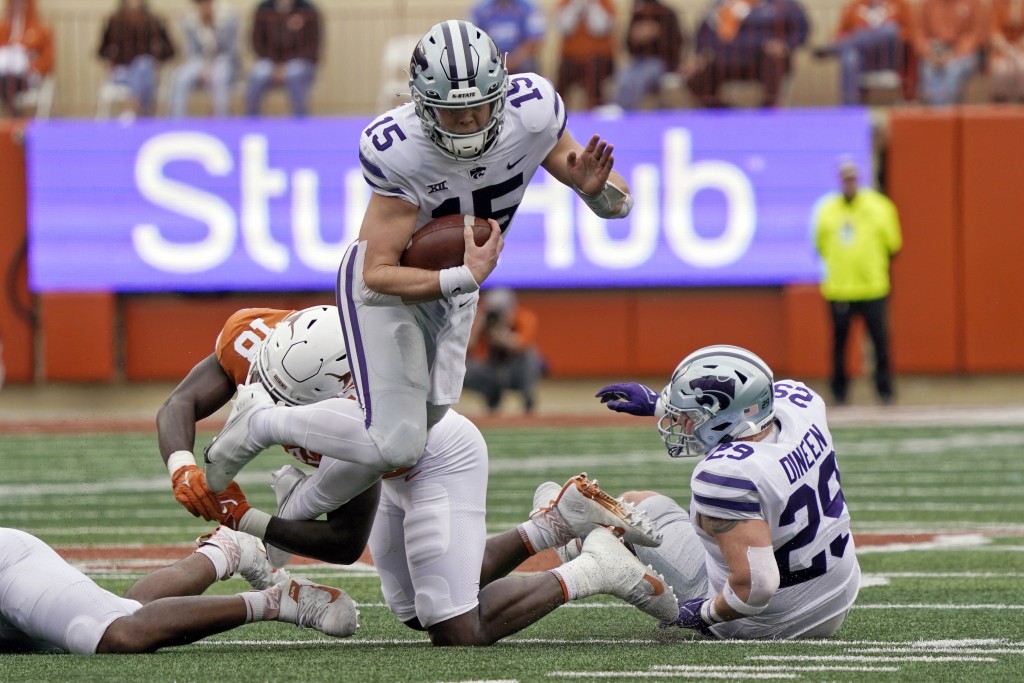 Roschon Johnson came to Texas as a quarterback, converted quickly to running back, and under difficult circumstances he worked at both positions on Friday.

“We needed to snap that losing streak,” Texas coach Steve Sarkisian said. “It was heavy. That doesn't discount the way the previous games went. But it's OK to smile.”

Johnson, the team's No. 2 running back, started in place of Bijan Robinson, who rushed for 1,127 yards this season but missed the last two games with a dislocated elbow. Johnson carried 31 times, including 11 for 77 yards in the fourth quarter. He ran for a 9-yard touchdown in the first quarter.

With Robinson out, starting quarterback Casey Thompson enduring a sprained thumb on his throwing hand, and backup Hudson Card missing because of an ankle injury, Sarkisian sometimes deployed Johnson taking direct snaps as quarterback in the wildcat formation. He completed his only pass attempt for two yards.

Thompson completed 17 of 23 passes for 170 yards and a touchdown.

“I knew with Hudson being down, me going in at quarterback was a huge possibility," Johnson said. "I knew the wildcat was gonna be critical. If I had to throw it, run it, even if I had to kick, I'm just trying to win. That was my mindset, and I tried my best to instill that mindset throughout the whole team."

Texas which has performed poorly defending the run this season, stopped star running back Deuce Vaughn on third and one at the Longhorn 17 and backup quarterback Will Howard on fourth down with 4:03 remaining.

Kansas State (7-5, 4-5) played without starting quarterback Skylar Thompson, who suffered an ankle injury last week against Baylor. Howard, his replacement, ran for a 71-yard touchdown, untouched by a defender, in the second quarter. But Howard completed just nine of 13 passes for 65 yards.

Texas which ranks No. 112 nationally in run defense, yielded 228 yards to Kansas State. But the Longhorns managed to stop Vaughn on third and one and fourth and one from the Wildcat 30 with 9:14 remaining before making the two critical plays against Vaughn and Howard. Interior linemen Keondre Coburn and Moro Ojomo made tackles, as did Brenden Schooler.

“With the players we have on offense, we should be able to get a yard," Kansas State coach Chris Klieman said. “That's the bottom line.”

Johnson, known as a selfless team leader, was the big star.

“Every guy in that locker room respects (Johnson),” Sarkisian said. “I don't think today was needed for that to happen. But I do think it was helpful.”

Kansas State: Vaughn, from the Austin suburb Round Rock, staged a good show for the family and friends who came to watch him. He rushed for 143 yards and caught two passes for seven yards, exceeding his average of 143.5 yards per game from scrimmage, fourth-best in the country. Without Thompson at quarterback, the Wildcats had no passing game.

Kansas State lost two straight games after winning four in a row. “We haven't played our best football the last two weeks, that's disappointing, and it starts with me,” Klieman said.

Texas: The Longhorns produced a strong effort at the end of disastrous regular season. Not long past noon on Oct. 9, the Longhorns were 4-1 and led Oklahoma 28-7 at halftime. Texas lost that game, 55-48, and five more in a row, surrendering halftime leads against Oklahoma State, Baylor and Iowa State in addition to the one to the Sooners. Then they fell behind Kansas 35-14 at halftime and lost in overtime.

The Longhorns faced Kansas State's Vaughn without its two starting inside linebackers, Luke Brockermeyer (knee) and DeMarvion Overshown (foot), both injured. Defensive end Jacoby Jones returned after missing five games with a broken foot. “It was definitely hard for me to get back,” Jones said. “There were some days when I was like, 'no, I don't want to do it.' I got up 5:30 in the morning at rehabbed."

Kansas State will receive its bowl game invitation on Dec. 5.

Texas is not bowl eligible with its 5-7 record, but the Longhorns could receive an invitation if there are not enough teams with six wins to fill all 82 spots. Candidates with 5-7 records are sorted out based on their NCAA Academic Progress Report.

Sign up for the AP’s college football newsletter: https://apnews.com/cfbtop25