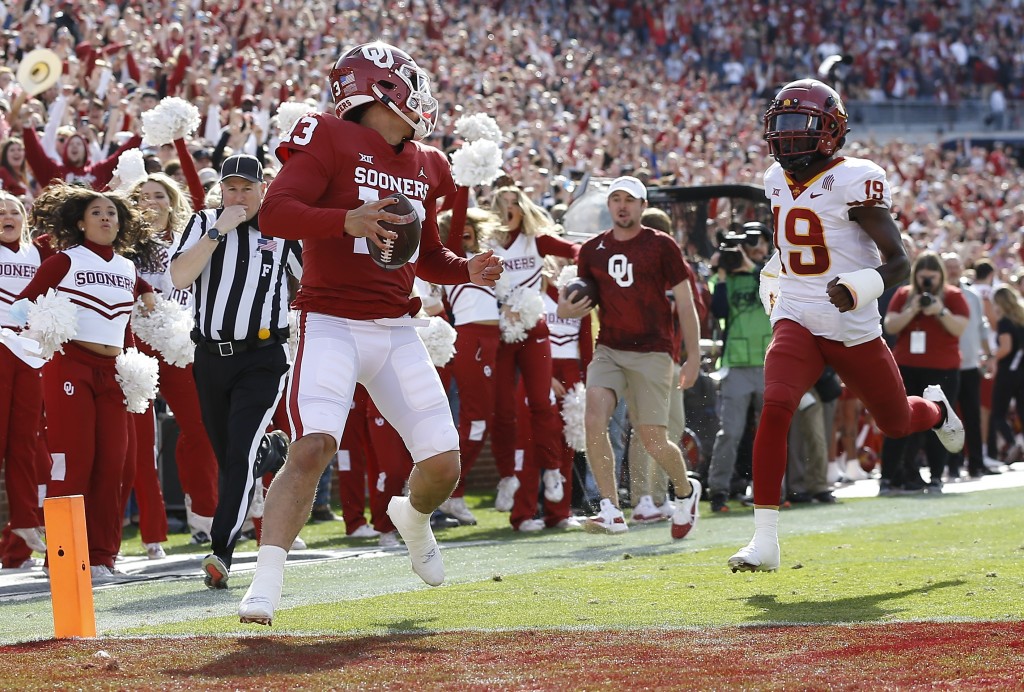 The heat of Bedlam is on for Oklahoma freshman quarterback Caleb Williams.

Oklahoma’s shot at its seventh straight Big 12 title is in jeopardy heading into Saturday's game at Oklahoma State. If Baylor beats Texas Tech and No. 10 Oklahoma loses to No. 7 Oklahoma State (10-1, 7-1 Big 12, No. 7 CFP), Oklahoma will fall short of the title game and the streak will end.

If Oklahoma wins, there will be a rematch with Oklahoma State for the championship the following week.

Oklahoma coach Lincoln Riley believes Williams can handle the pressure, even after rough outings against Baylor and Iowa State the past two weeks.

“It’s just feel for the game, feel for how you’re being defended, feel for what you’ve got to do in given moments to move the football and keep us marching down the field,” Riley said. “His capability mentally and physically is not an issue, really anywhere.”

Even when he struggles, Williams has spectacular moments. Last week, he broke a 74-yard run against Iowa State. For the season, he has completed 66% of his passes with 15 touchdowns and four interceptions. He has rushed for six touchdowns and 6.7 yards per carry.

“We’ve faced quarterbacks that have similar qualities this year,” he said. “I’m not sure they all have the same package that he has at once, but we have faced some guys that can move around well in the pocket, they can throw it and can get out and cause some problems; and that’s what he has done.”

Oklahoma State’s defense has kicked it into high gear the past four weeks, allowing just 23 points and one defensive touchdown. That's why the Cowboys have earned a spot in the Big 12 title game, regardless of Saturday's outcome. And the Cowboys, like the Sooners, still have an outside shot at the playoff.

But Oklahoma still ranks 10th nationally in scoring offense and has scored at least 50 points four times this season.

“What’s on everybody’s mind is the last couple of games,” Riley said. “We’ve been hit and miss offensively. You know, everybody forgets, we’ve had a lot of moments with this offense, especially the back half the year where we’ve lit people up. We still have that ability. We have that capability.”

Riley said a possible rematch with Oklahoma State doesn’t change much for the Sooners.

“The potential is unique, but it’s on us to win,” he said. “I approach this like every other one.”

Gundy has talked to his team about the odd situation.

“The decision that we made is completely considering the championship game irrelevant and a bonus,” he said. “We’re playing this game like it wasn’t even there, like years ago when we didn’t have a championship.”

Oklahoma State has averaged 268 yards rushing during its four-game win streak. The Cowboys exploded for 489 yards rushing against TCU in a 63-17 win.

“Guys use the term winning the line of scrimmage, and you just know you make note of that as you’re watching on film,” Grinch said. “You’re seeing the opposite color jersey from a defensive standpoint going in the wrong direction and the offense going kind of like a wave going downfield, and obviously, the tailbacks doing a great job of finding the crease and then kind of making you pay for it.”

Oklahoma State quarterback Spencer Sanders sometimes was error-prone early in his career. But during the Cowboys' win streak, he has thrown just one interception.

“You’ve seen, I think probably, making a few less mistakes,” Riley said. “You know, he’s always been a tremendous athlete. Everybody’s known that. But he’s obviously running well, in fact, with his legs, and then and I do think he’s really improved in the throw game.”

Oklahoma's Gabe Brkic was one of the nation’s best kickers for most of the season, but he’s had a rough go lately. He missed two field goals against Baylor two weeks ago and missed a 25-yarder against Iowa State last week. He’s only made two of his past six attempts.

Still, he has made five of seven from at least 50 yards this season.

“No other kicker I’d rather go into a game like this with,” Riley said. “When you do that for a living, you’re going to miss some every now and then. He’s made his share and he’ll make them Saturday night.”

That game kicks off more than seven hours before the Oklahoma-Oklahoma State showdown. If Texas Tech wins, Oklahoma will clinch a spot in the Big 12 title game.

“I think we’re going to wake up, we’re going to prepare for our game, do what we normally do and aim to win,” he said. “We’re not worried about the results of those guys. We have our own game to play, so we’re going to be ready for that one. Honestly, I’m not even thinking about what’s going on down there in Waco.”