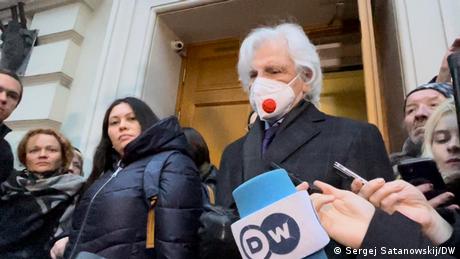 Russian rights group Memorial lobbied the country's Supreme Court on Thursday in a bid to avoid being shut down.

Memorial asked the court to dismiss a case, in which it is accused of violations of its designation as a "foreign agent."

The organization was founded in 1989 by Soviet dissidents, including Nobel Peace Prize laureate Andrei Sakharov. It cataloged Soviet-era crimes and campaigned for human rights in modern-day Russia.

However, the group's central structure, Memorial International, is facing trial for not using the label "foreign agent," as stipulated by a controversial new law for groups receiving international funding.

During the hours-long hearing, prosecutors accused the group of "systematically" failing to use the "foreign agent" label and of trying to hide its status.

Defense lawyers denied any serious violations, arguing that the group had properly used the label and that only a small number of documents may have been missing the term.

A DW correspondent at the trial said the representatives of the Prosecutor's Office were unable to convincingly substantiate the arguments in their suit, responding with silence to many of the defense's questions.

Prosecutor General Igor Krasnov, who filed the lawsuit with the Supreme Court, told the court that the organization should be shut down, as it has faced several fines in the past for failing to abide by the "foreign agent" labeling rules in a "persistent disregard for the law."

The hearing was adjourned until December 14, with the judge denying the defense's request to dismiss the trial, but conceding that the organization showed "good faith" in following the rules.

Supporters and diplomats in attendance

They said the charges would spell the end of the group, and signal further declines in democracy in Russia.

Co-founder Yelena Zhemkova said after the trial: "We will continue to fight. We will continue to prove that an organization that has worked for 30 years and has helped people cannot be closed down for technical, non-contentious issues."

Maria Krechetova, a 48-year-old philosophy teacher, told the AFP news agency that shutting down Memorial would be an "insult to the millions" of people who suffered under the Soviet regime.

"Banning Memorial would deal a final blow to the idea that a person means something [in Russia], and that their rights mean something," she said.

Several foreign diplomats were also present at court, according to the Interfax agency, including representatives from the United States, Britain and France.

It was one of two trials the group is facing. The other case started on Tuesday and will continue later this month. Memorial is also defending itself against a charge of defending "extremist and terrorist activities" for publishing lists of imprisoned members of banned political or religious movements.

The verdict of the Supreme Court case will not be subject to appeal.

Memorial lawyer Grigory Vaypan said it was unlikely that the court would rule in its favor: "Unfortunately, the courts in Russia are arranged in such a way that if a claim is made by state bodies, especially the Prosecutor General's office, it is very likely the claim will be satisfied."

The group is a loosely affiliated union of more than 50 smaller groups in Russia and abroad, however supporters believe this action will affect the whole group.

The presidents of the Baltic states and Poland — all of which suffered under Soviet rule — condemned the actions of the Russian judiciary in a joint statement.

Alar Karis of Estonia, Egils Levits of Latvia, Gitanas Nauseda of Lithuania and Andrzej Duda of Poland expressed concern about "historical revisionism in Russia and in particular the possible closure of Memorial" in the letter.