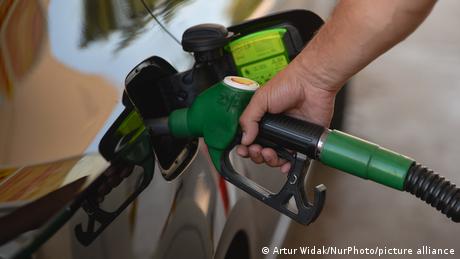 A program announced on Thursday is worth up to 10 billion zlotys (€2.14 billion, $2.40 billion) will provide cash payments to households. These payments will be income-dependent and made in two installments in 2022.

These measures are designed to help Poles deal with inflation, which has hit levels not seen in two decades in Poland.

"The Polish government is acting to… soften, buffer against this growth in inflation," Morawiecki said at a news conference.

How significant are the tax cuts?

Taxes on petrol will be lowered to the minimum allowed by the European Union. This will go on for five months, starting on December 20.

Value-added tax (VAT) on gas will drop from 23% to 8% in the period of January-March. VAT on electricity will be cut to 5% from 23% during the same period.

The cuts follow changes to Poland's tax regime announced earlier this year, referred to as the "Polish order" by the country's ruling Law and Justice Party (PiS). According to a Polish government report from September, beginning in 2022, around 9 million Polish citizens will stop paying income tax and no tax will be paid by 70% of pensioners.

Other governments around the world are also facing inflationary pressures due to rising global energy prices and supply chain disruptions due to lockdowns born out of the coronavirus pandemic. Germany's inflation rate hit a 28-year high in October, and Pakistan is facing exponential growth in its inflation rate.

Last month the National Bank of Poland raised interest rates in a bid to control inflation, following its Czech, Hungarian and Romanian counterparts.