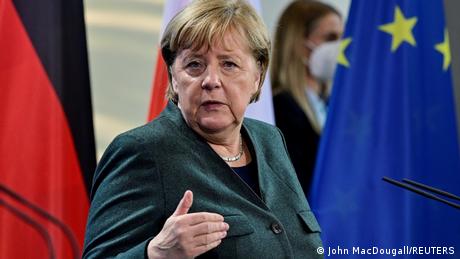 German Chancellor Angela Merkel on Thursday said Russian President Vladimir Putin must send a clear message to Belarus that the country must not "weaponize" migrants.

"We have an interest that people in Belarus are looked after in a humane way," Merkel said as talks got underway with Polish Prime Minister Mateusz Morawieck. "We have also discussed the humanitarian situation on the Polish side of the border."

"We are of the same opinion with regard to the nature of the crisis that we are in and with regard to the question of how it is to be resolved."
Morawiecki called for more sanctions on Belarus from the European Union, should the Polish-Belarus border crisis escalate any further.

In a joint news conference with Merkel in Berlin, Morawiecki said: "We must plan further sanctions, including on trade."

The EU has accused the authoritarian Belarusian leader Alexander Lukashenko of deliberately engineering the situation, flying people from crisis regions to Minsk and then transporting them to the border of the EU.

Merkel plans to discuss the issue during talks with her Polish counterpart later on Thursday.

The comments from the German and Polish leaders came after hundreds of migrants tried to cross the border from Belarus into Poland over the last 24 hours. Poland's border guards on Wednesday registered at least 375 attempts to cross border barriers from Belarus, in an effort to enter the EU country.

The EU says the daily confrontations in the region are part of a "hybrid war" Minsk has designed to destabilize the bloc and hit back against sanctions it has already imposed on Belarus.

Regarding Wednesday's attempts to cross into Poland, Border Guard spokeswoman Anna Michalska told the news agency Reuters: "They were trying to break through the border, attacking the border. They were throwing branches and stones and the attempt was stopped by our officers."

Michalska said more than 200 migrants had flattened a section of the fence with logs, near the near the village of Czeremsza.

She said five migrants had been hospitalized after suffering from exhaustion.