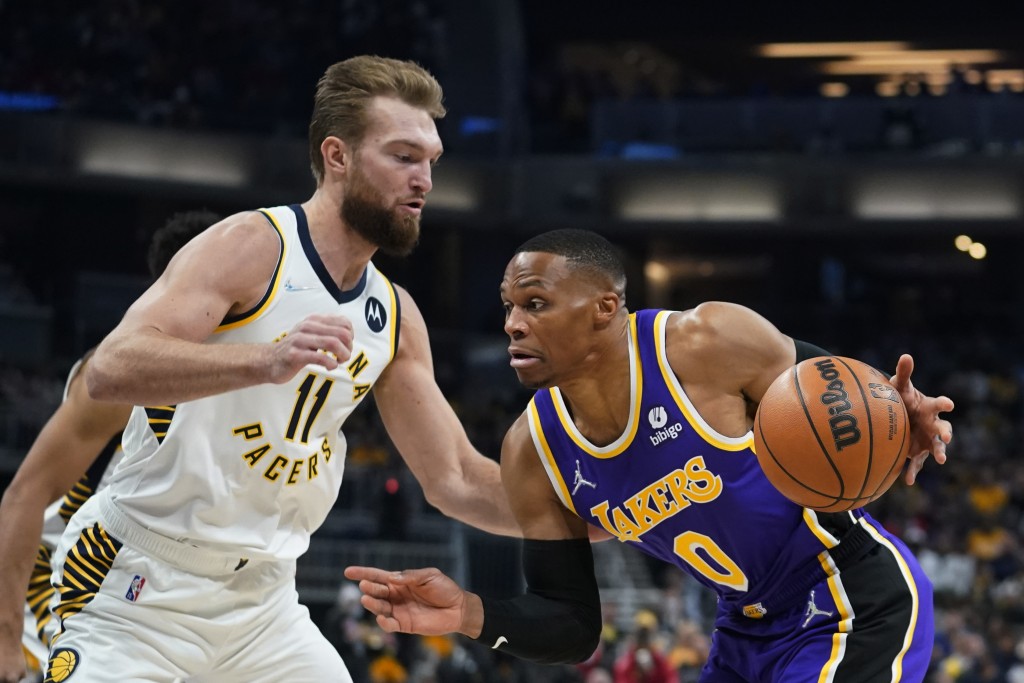 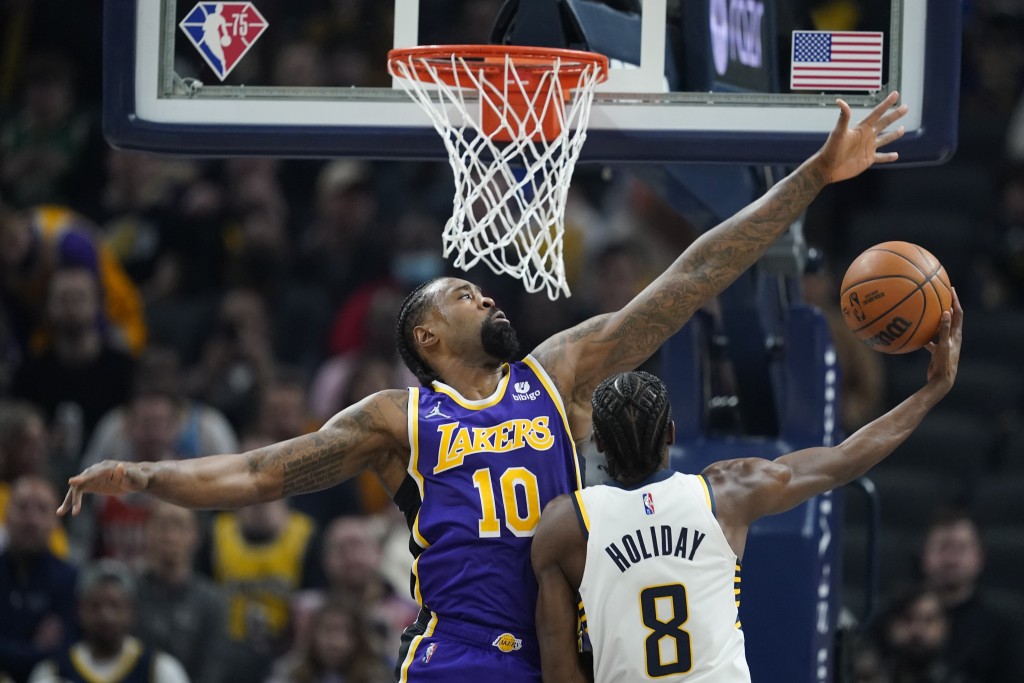 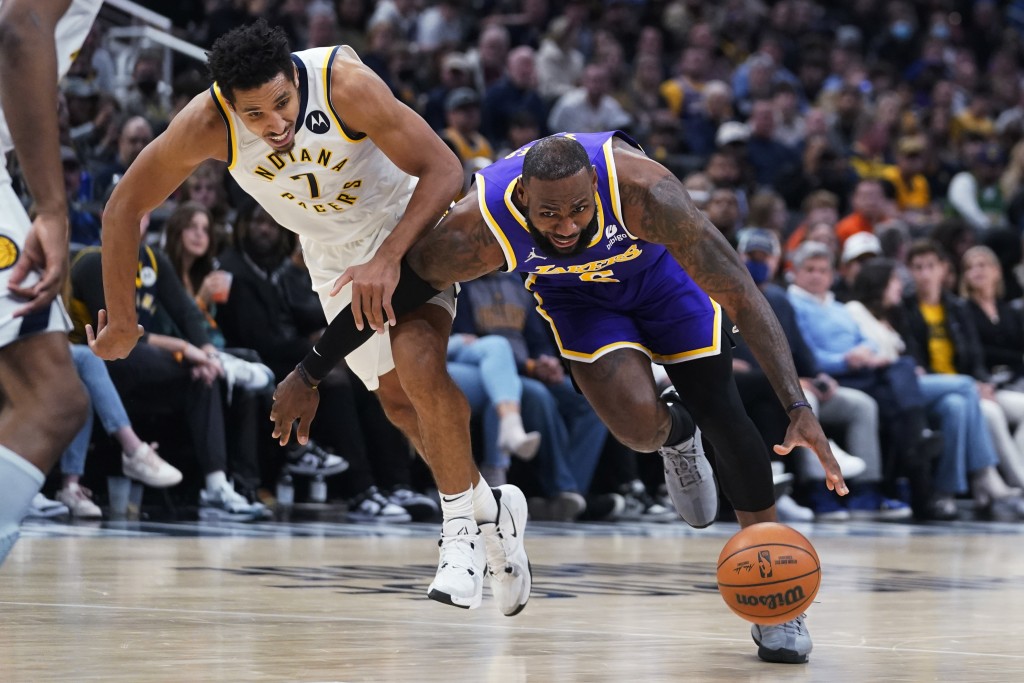 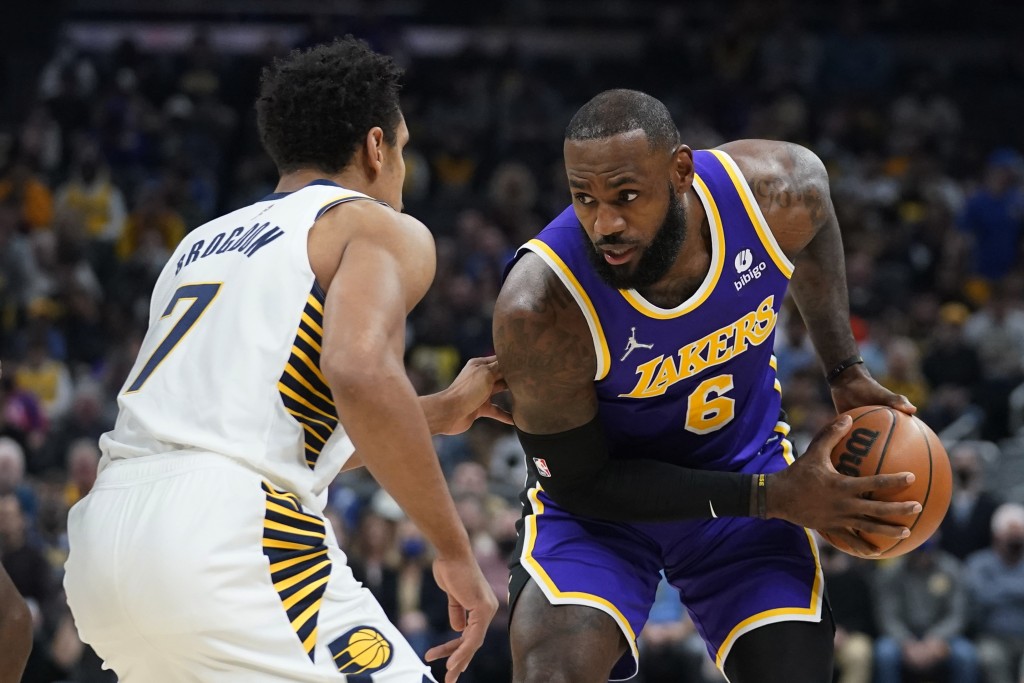 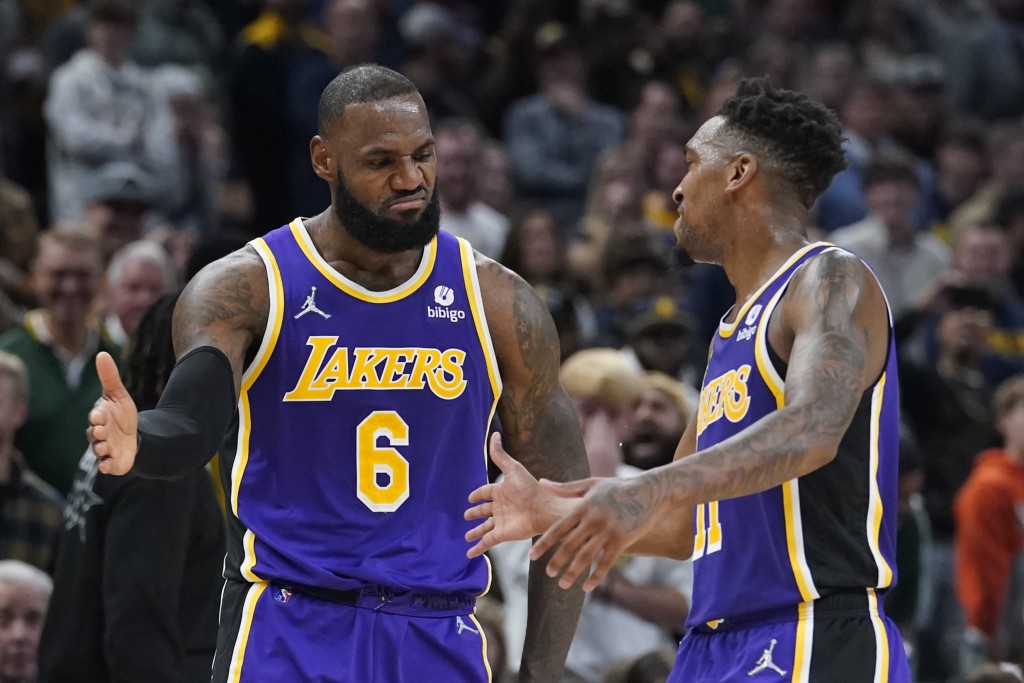 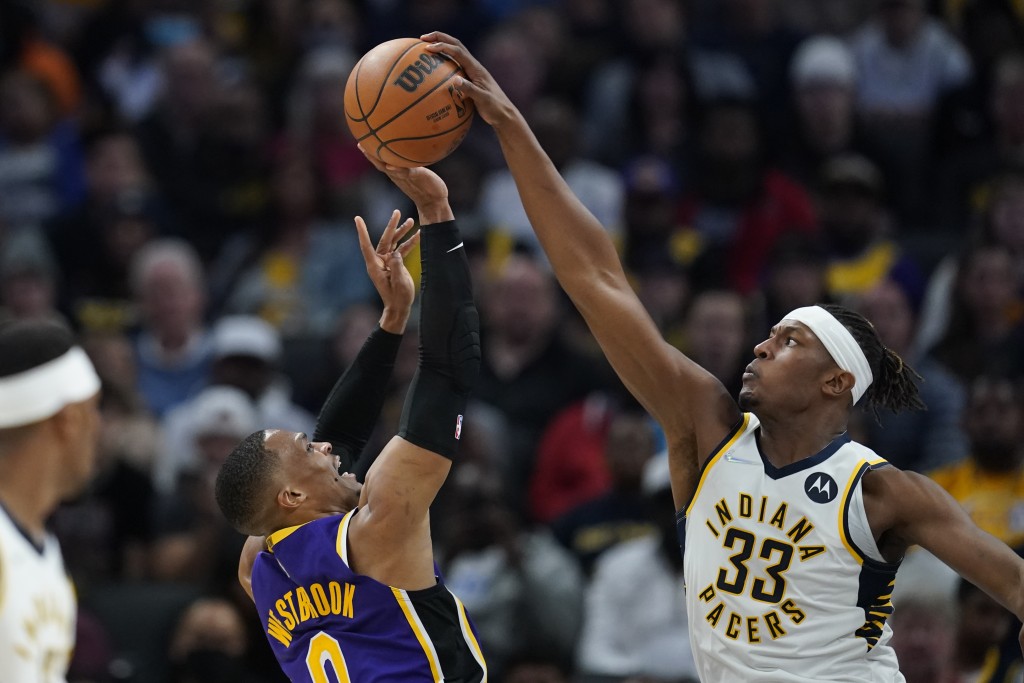 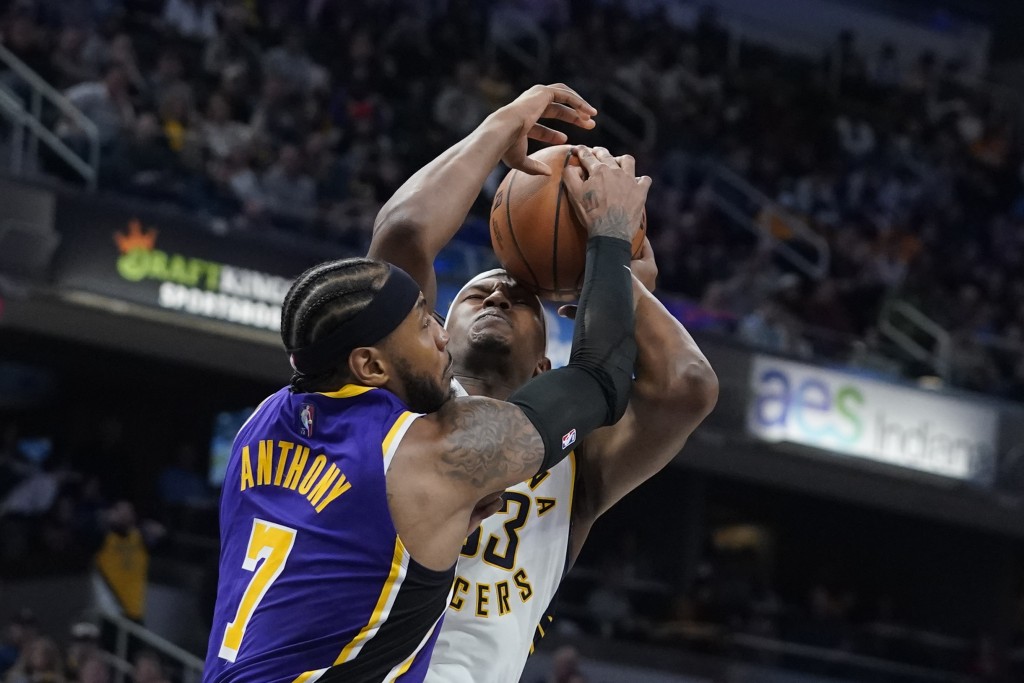 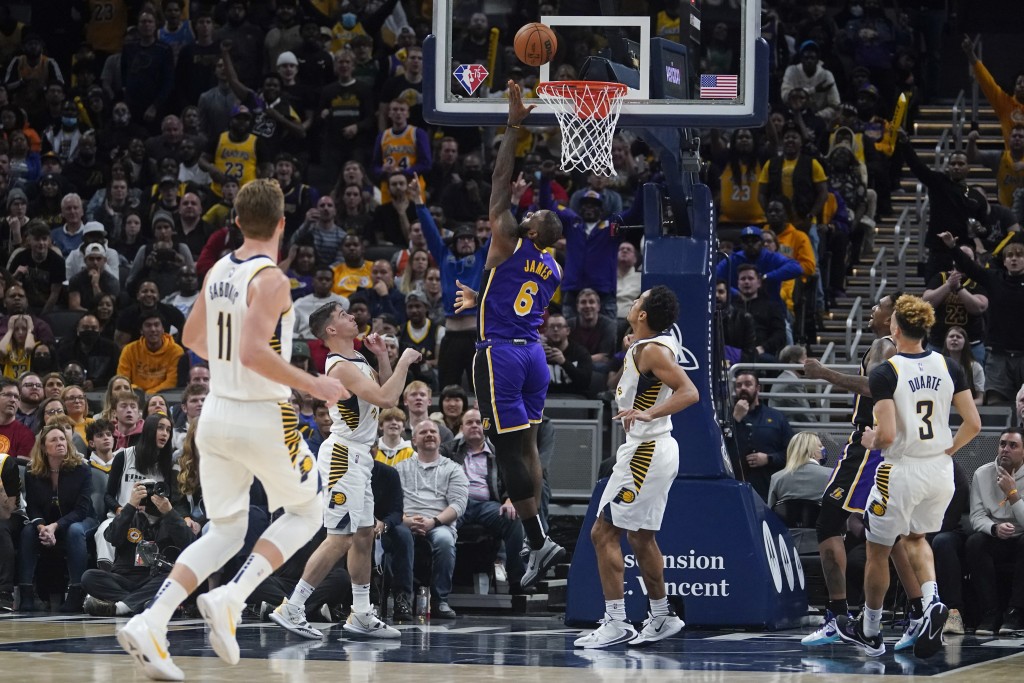 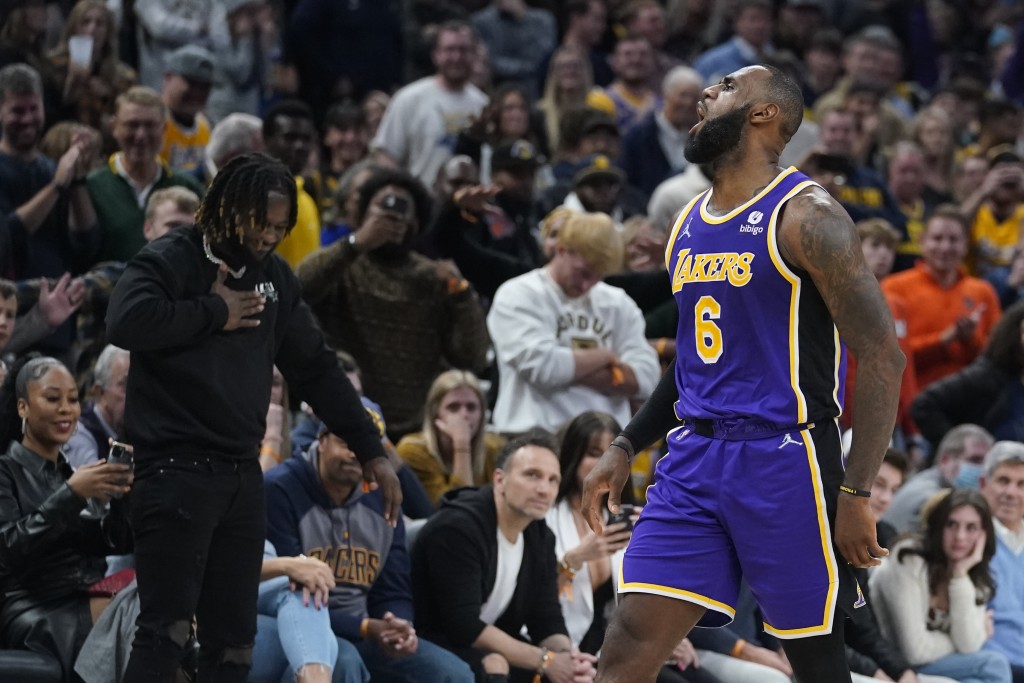 INDIANAPOLIS (AP) — LeBron James missed his chance to shine at Madison Square Garden this season. So, he picked up his teammates in his return Wednesday night at Indiana.

After drawing the first suspension of his career because of a fracas Sunday in Detroit, James delivered tiebreaking and back-breaking 3-pointers in overtime and finished with 39 points to help the Los Angles Lakers rally past Indiana, 124-116.

James sat out Tuesday night in a loss at New York after striking Pistons center Isaiah Stewart in the face and drawing blood Sunday. James said he has not spoken with Stewart.

“I know he wanted to get this ‘W,’” coach Frank Vogel said. “He really wanted to play in that Knicks game, he looks forward to that every year. So to bounce back tonight, to quarterback the defense and carry the offense the way he did, that’s just a performance for the ages.”

James was 13 of 29 from the field and had six assists and five rebounds. And with All-Star center Anthony Davis out because of flu-like defense, James also was in charge of calling the defensive assignments in a game the Lakers never led until Malik Monk's 3-pointer with 4:35 left in regulation.

But down the stretch, James was his usually dominant self as the Lakers won for the second time in six games.

“James is a great player, he got hot," Pacers coach Frank Vogel said. “We needed to do some things to limit his touches. We did not and we paid the price.”

He bailed the Lakers out of a game that had all the trademarks of a pre-holiday contest at the end of a long trip — inconsistent play, sloppiness and at times bad basketball.

Yet James & Co. found a way to finally clean it up and deliver the knockout blow.

He helped force overtime by scoring seven straight points to give the Lakers a 110-104 lead with 76 seconds left in regulation.

Russell Westbrook made two free throws with 22.6 seconds left to make it 112-109 and only an off-balance 3 by Chris Duarte and James' errant 3 as the buzzer prevented the Lakers from winning in regulation.

James didn't give the Pacers a second chance in overtime.

His first 3 made it 117-114 with 2:51 left. A minute later, he made the second to extend the margin to six and added a midrange jumper before Wayne Ellington closed it out. Indiana managed only one basket in the final three minutes.

Lakers: Russell Westbrook had 20 points, seven rebounds and five assists. Monk had 17 points. Carmelo Anthony and Ellington each added 14. ... DeAndre Jordan had 11 rebounds and Dwight Howard had nine. ... Rajon Rondo and Kent Bazemore also did not play and were not on the pregame injury report.

Pacers: Brogdon added seven rebounds. ... Domantas Sabonis had 14 points, 12 rebounds and six assists while Myles Turner had 12 points, six rebounds and two blocks. Just Holiday scored 16 ... Indiana was 13 of 46 on 3s ... After committing only two turnovers in the first half, the Pacers started the second half with three in a row. They wound up with 11.

Pacers forward T.J. Warren continues to recover from a stress fracture in his left foot and he took another significant step Wednesday. Less than three weeks after ditching the walking boot, Warren did some spot shooting during the pregame shootaround, coach Rick Carlisle told reporters before the game.

“He's not moving that much but he is participating a little bit, which is heartwarming for us and I think for him, too," Carlisle said. “We'll see, I guess, on Tuesday where he's at and then we may have a timetable."