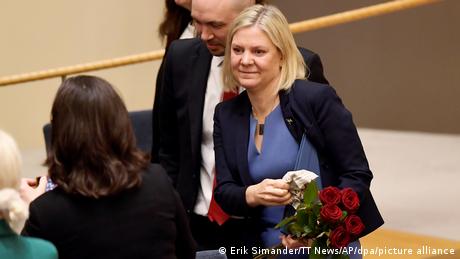 The move came after the Green Party announced that it would be leaving the coalition government. The Green Party decided to leave government when the country's parliament rejected spending plans in favor of those proposed by opposition parties, spelling crisis for the new administration.

Speaking at a news conference Andersson said: "For me, it is about respect, but I also do not want to lead a government where there may be grounds to question its legitimacy."

Andersson also pointed out that "a coalition government should resign if a party chooses to leave the government. Despite the fact that the parliamentary situation is unchanged, it needs to be tried again."

The speaker of parliament Andreas Norlen confirmed receipt of Andersson's resignation and indicated that the path ahead would be discussed according to local news agency TT.

The budget proposal was rejected in favor of budget plans mooted by opposition parties which include the right-wing Sweden Democrats.

Per Bolund who is spokesperson for the Green Party said there was deep regret over parliament's decision to vote for a spending plan "negotiated by a right-wing extremist party." The party said on Twitter: "The Green Party will not take office in a government that is forced to control a budget negotiated by the Sweden Democrats."

The result was tight with the leader of the minority government clearing the winning post by just one vote.

Andersson previously served as finance minister and took over as leader of the Social Democrats earlier this month.

The country's outgoing prime minister, Stefan Lofven, resigned on November 10 after seven years in office after losing a parliamentary vote of confidence. Lofven and Andersson are both Social Democrats.