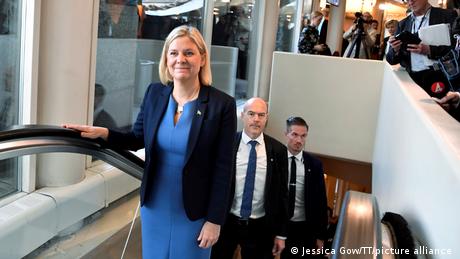 Magdalena Andersson, 54, became the first female prime minster of Sweden on Wednesday following a parliamentary vote putting her in the top job.

The result on Wednesday was as tight as it could have been, with the leader of a future minority government clearing the winning post by just one vote.

Andersson previously served as finance minister and took over as leader of the Social Democrats earlier this month. Late Tuesday, she secured an agreement with the Left Party to increase pensions in exchange for the party's support in Wednesday's vote in parliament.

Crucially, the Center Party said soon before the vote that it would abstain, rather than oppose her, pushing her past the winning post.

Annie Loof, the leader of the Center Party, said, "We will not give the Sweden Democrats governmental power."

Andersson was elected with 117 members of parliament voting in favor, 174 against and 57 abstentions. In Sweden's parliamentary system, majority backing is not required to be elected prime minister rather a candidate needs to not have an absolute majority or fewer than 175 parliamentarians opposed to them.

Loof however said she would not support the new budget proposed. She said the minority coalition's alliance with the Left Party had "drawn the government further to the left."

The decision puts Andersson in a tricky position already, as the prime minister comes into office already facing questions over how effectively her coalition will be able to govern and on whose terms. She said she would not resign as prime minister if the opposition budget passes.

Three opposition parties put forward a common budget that could win the support of parliament; Andersson would then be expected to work with it.

Former Prime Minister Carl Bildt said on Twitter that it was "a tumultuous day" in his nation's politics.

The country's outgoing prime minister, Stefan Lofven, resigned on November 10 after seven years in office after losing a parliamentary vote of confidence. Lofven and Andersson are both Social Democrats.