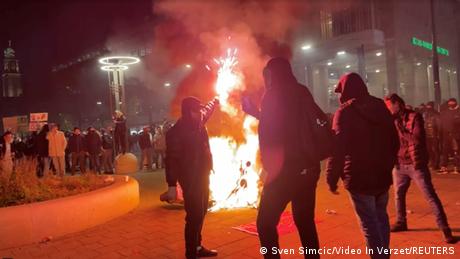 The Netherlands: Unrest even in a soccer stadium

Up until this past weekend, the Dutch soccer club SC Cambuur Leeuwarden was making the kinds of headlines everyone wants. The team got off to an excellent start in the country's first league, and was about to host FC Utrecht for the week's top match. That's when unvaccinated supporters who were prohibited from entering the stadium because of coronavirus restrictions turned violent and stormed the field. The match was almost cancelled after they stormed the pitch and launched fireworks.

And Leeuwarden wasn't an isolated case. There were also reports of violence and rioting against COVID-19 restrictions in Enschede, Groningen, The Hague and in Rotterdam for a third night in a row. Rioters threw stones at police, vandalized streets and set cars ablaze. According to local authorities more than 140 people were arrested.

The Netherlands has been under a partial lockdown for a week now as it attempts to curb rising case numbers. People are only permitted to meet with a maximum of four other people inside their homes, employees are expected to work from home if possible, and shops must close earlier.

"Bella Ciao" is an Italian protest song that was the anthem of Italian partisans fighting Mussolini and Hitler during World War II. The song, which sings of courage and resistance, has since been co-opted by opponents of Belgium's coronavirus measures, amongst them right-wing radicals — and they travelled to Brussels in the thousands to sing the song in front of European Union headquarters.

The situation then escalated in the capital as demonstrators threw stones and smoke bombs, forcing police to respond with tear gas and water cannon. Those who are unvaccinated in Belgium are no longer permitted to visit bars or restaurants, and workers are expected to work from home at least four days a week, if possible. The country has also extended its vaccination campaign to include five- to eleven-year-olds.

On November 17, 1989, just over a week after the fall of the Berlin Wall, thousands of students took to the streets of Prague, the then-capital of Czechoslovakia, demanding more freedom and an end to communist rule. It was the beginning of the so-called "Velvet Revolution." Thirty-two years later, demonstrators used this national holiday to express their discontent with the government's coronavirus policies, setting off fireworks.

Less than half of the population is vaccinated, and the unvaccinated are now being sent into lockdown. They are no longer permitted to attend public events, or to frequent restaurants, hotels or shopping malls. With only a few hundred beds still available in hospitals, a medical emergency is looming.

Herbert Kickl may have gotten sick from contracting COVID, but that's not stopping the head of Austria's far-right populist Freedom Party from spearheading his country's protest movement. "As of today, Austria is a dictatorship," Kickl said, responding to the government's decision to enforce a fourth nationwide lockdown beginning this week.

The curfew will be in effect for everyone for three weeks, until December 13. For the unvaccinated, the curfew will continue indefinitely. Museums and cinemas have been closed and people are only allowed to leave their homes for valid reasons. Only schools are remaining open and parents can decide whether to send their children to school. Austria's police are required to monitor for compliance meticulously.

Portugal: Thanks to the military, the country is a vaccination champion

At the start of the year, few people in Portugal had ever heard of Henrique Gouveia e Melo. But today, the 61-year-old naval officer and head of the country's COVID-19 vaccination campaign is a national hero. Standing in uniform and addressing the country he said "It's us against the virus. Do you want to fight in our ranks? Then you must get vaccinated!"

And that's exactly what they did, making Portugal the current leader in Europe with 88% of the population having received at least one shot. Among the over-12 year-olds that figure rises to 98%. Portugal's health authorities send residents at least three suggestions for vaccination appointments via text message. Despite this, infections are trending upwards, if only slightly, making mandatory outdoor mask wearing again up for debate.

Spain: Will the virus be over by next spring?

If you believe what the media is saying these days, Spain is a coronavirus oasis. The country's socialist Prime Minister, Pedro Sanchez, was criticized early on for his COVID-19 policies, but no longer. He told a crowd of cheering supporters in the tourist stronghold of Benidorm that those who "used to shout like that are now silent." When talking about when he thought the virus might finally be defeated, he said: "maybe in the spring."

Ninety-eight percent of Spain's hospital workers are now fully vaccinated. In nursing homes the figure is 90%. These workers experienced the dramatic start of the pandemic firsthand, with completely overcrowded hospitals and scores of dead in nursing homes. And when it comes to booster shots no one needs to scramble for appointments themselves in Spain. Everyone is sent appointment options via either text or WhatsApp from which they can choose. Many regions are now considering introducing Mallorca's successful COVID passport for nightlife activities since infection numbers are slowly rising again.