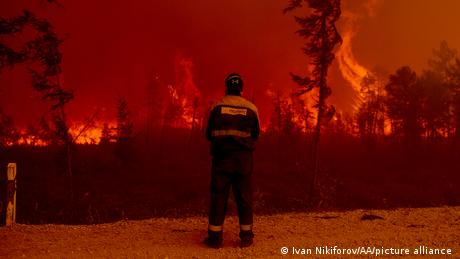 Russian President Vladimir Putin has long been one of the world's leading climate change skeptics, at times questioning the role humans have played in altering the world's climate and even going so far as to suggest a warming world could create new economic opportunities for the country.

The past weeks and months, however, have seen him order his government to develop plans for Russia to reach carbon neutrality by 2060 and even declare the goal of outpacing the European Union in terms of overall emission reductions by 2050.

Addressing a meeting of the world's 20 most developed economies in October, Putin warned that Russia — which is the fourth largest emitter of greenhouse gases — was currently warming 2.5 times faster than the rest of the planet, exposing it to threats like desertification and melting permafrost, which covers some 65% of Russia's territory.

It's a dramatic shift from a man who once joked that Russians should embrace climate change because it implied improved grain harvests and smaller fur coat bills.

Damir Yanakhov, decarbonization coordinator for the Russian Climate Fund, an NGO working to mitigate the effects of climate change, described Moscow's 2060 carbon neutrality plan as "without a doubt ambitious," as well extremely difficult.

He told DW it would require a radical restructuring of Russia's relationship with energy, starting with how the country heats its buildings right through to its export of hydrocarbons — one of the pillars of the economy.

Despite making noises about having accepted the reality of anthropogenic climate change, Russia's 2035 energy strategy foresees an increase in coal production primarily for Asian markets, as well as an expansion in the production of natural gas — which is being widely touted as a controversial transition fuel on the road to carbon neutrality.

In addition, Putin declined to travel in person to the COP26 climate conference in Glasgow, Scotland, initially opting instead to attend via video link before canceling his attendance entirely. No official reason was given.

Time to 'make the jump'

Nonetheless, in the past weeks, Kremlin spokesperson Dmitry Peskov has repeatedly stressed Moscow's new-found interest in climate protection, telling reporters that the heating planet was "one of [Russian] foreign policy's most important priorities."

Despite the apparent inconsistencies, Alexander Lebedev, a senior business lecturer at Moscow's Higher School of Economics (HSE), remains certain that the Kremlin's announced shift on climate action is serious.

"The Russian government has decided there is a good trade-off [in making the transition to a carbon neutral economy] and the time has come to make the jump," he said in comments to DW, adding that Russia's wealth of natural gas, which has a lower carbon footprint than other fossil fuels, will be in great demand in the short term, especially as the EU shifts away from coal.

Still, Lebedev sees carbon capture as a way to offset continued extraction of hydrocarbons like gas. Russia has "a great advantage" in its natural spaces which can be used to sequester CO2.

Moscow is planning to use its 760 million hectares (1.87 billion acres) of forests as well as its wetlands as carbon sinks to trap much of the greenhouse gas produced by Russian industry. That would require expanded protections for existing wild spaces and a move toward actively cultivating them to maximize the amount of CO2 they could capture.

A pilot project is already underway on Sakhalin Island in Russia's Far East. Based on government figures, human activity on Sakhalin produces around 12 million metric tons of carbon dioxide annually, with much of that coming from coal and natural gas extraction. Its forests absorb around 11 million tons. The hope is that with a few changes, Sakhalin's forests could soon absorb more carbon then currently produced.

"After the collapse of the Soviet Union we were left with a lot of abandoned agricultural territories," said Yanakhov. "If we transfer these forests to managed forests, we can increase their carbon capture capabilities."

However, he stressed that Russia also needs to focus on reducing overall emissions levels by moving away from fossil fuels.

And some climate scientists and economists warn that using Russia's forests as an offset to justify further CO2 production would amount to giving Moscow a license to continue to pollute. Furthermore, any widespread attempts to decarbonize the Russian economy are likely to face major headwinds from the country's entrenched oil and gas lobby.

The branch only accounts for around 1.5% of Russia's labor market but generates a large proportion of the country's wealth. Along with other extractive industries like mining, fossil fuels make up some 60% of GDP, according to government estimates.

HSE lecturer Lebedev says public sentiment is shifting and more Russian's are worrying about the health of their natural spaces, which have traditionally been a source of national pride.

"I've been observing it for the last year and a half. When COVID really started with lockdowns, people got more concerned about health, their health conditions and their environment."

He said the Siberian forest fires plaguing the country over the course of the pandemic have raised awareness of environmental causes.

It's a change Damir Yanakhov has noticed too.

"When I watch federal TV channels you can see they are taking up environmental subjects more often, including problems surrounding climate change. I really noticed it for the first time in August when we had very acute issues with forest fires. Vladimir Putin said there were two components to the fires — the human factor and climate change."