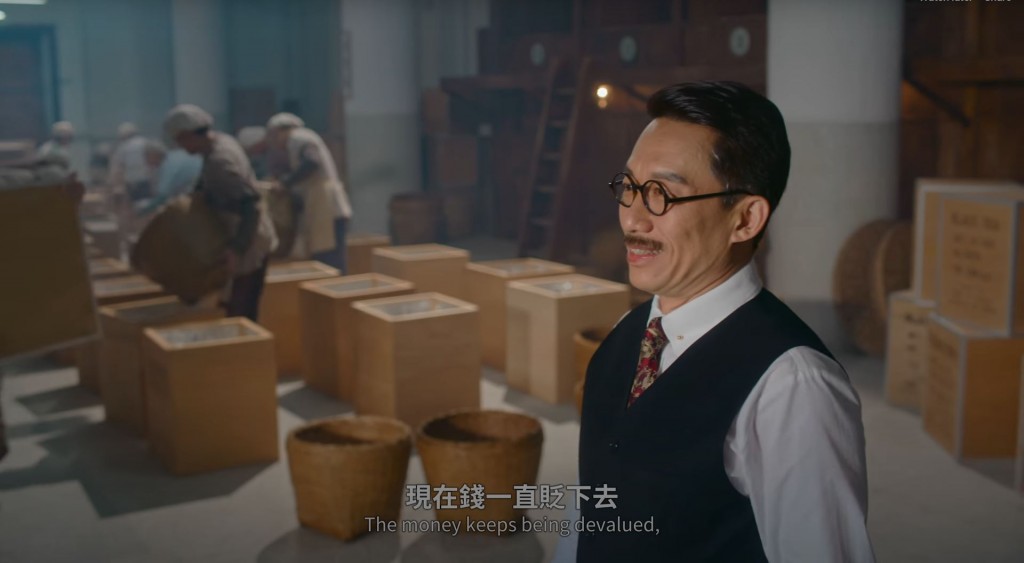 TAIPEI (Taiwan News) — “Gold Leaf,” a historical drama set in 1950s Taiwan, has sparked controversy for misrepresenting the parties responsible for the birth of the New Taiwan dollar.

Early on in the Public Television Service (PTS)-produced Netflix show, a scene shows an American representative saying, “To change the state of Taiwan’s economy, the most efficient way is to adopt new Taiwan dollars.” The vice premier responds, “The Republic of China strongly opposes this.”

However, the companion novel of the show, written by one of the screenwriters, Huang Kuo-hua (黃國華), depicts the American representative as berating the KMT for irresponsibly creating a list of currencies and proposing New Taiwan dollars. Befuddled by the production’s decision to revise the screenplay, netizens protested the show’s distortion of history.

Jim Lee (李筱峰), Taiwanese historian and honorary professor at National Taipei University of Education, pointed out that hyperinflation plagued Taiwan between 1945 and 1949, during which commodity prices skyrocketed by a factor of 7,000, CNA reported.

The KMT government had no choice but to introduce the New Taiwan Dollar, which was worth 40,000 Old Taiwan Dollars, he observed. "The American government did not approve of the policy, as it believed those without land or property would become penniless. The screenplay got it the other way around."

A social media manager’s response to angry commentators on Facebook fanned the outrage. The now-deleted post on the show's Facebook page asked, “Was (the policy) eventually executed in history, yes! Who executed it? Who was the one who ultimately made the decision? No matter if the U.S. agreed or disagreed, there must have been a back-and-forth discussion in the process; that is not the point of the drama. Whatever the result was, it was executed at the time.”

Netizens fixated on the comment’s focus on “the point of the drama,” calling it “arrogant” and admonishing PTS for letting a social media manager make such a response.

Chung Fa-lan (鍾法藍), granddaughter of White Terror victim Chung Hao-tung (鍾浩東) and great-granddaughter of activist Chiang Wei-shui (蔣渭水), voiced her disappointment in the show. “So when one makes a period drama, the point is not to follow historical structures… I thought period dramas are supposed to be creations based on historical facts,” she posted on Facebook Monday (Nov. 22).

She called the decision to trade 40,000 Old Taiwan dollars for one New Taiwan dollar (US$0.03) “the KMT’s attempt to trample the Taiwanese and a dirty method of dismantling the socio-economic status of Taiwanese.” The policy ruined countless families and lives, according to Lan.

She accused the show of avoiding facts and attempting to frame the KMT as a victim by placing responsibility on the U.S. “PTS keeps claiming that it will not be a mouthpiece for the government to promote propaganda, but it can be a medium to whitewash the KMT?”

In response to the controversy, screenwriter Huang Kuo-ha announced that he would not publish any further writing, whether in the form of novels, dramas, or financial books. He said he was making the decision to take responsibility for missing multiple opportunities to amend the screenplay after the head screenwriter and producer had made all kinds of revisions.

He also clarified why the novel was inconsistent with the show: “It was written around the time filming was in progress, so there was no way of writing the novel after there was a show.”

PTS and the “Gold Leaf” production team issued a joint statement following the controversy that reads, “We are very sorry for our mistake in representing the history of ‘trading 40,000 yuan for one yuan’ with merely one scene and not providing the full picture on the policy clearly and correctly. We will add textual clarification to the program when it airs.”

The statement emphasized that “Gold Leaf” is an original story created by a team of screenwriters and the director and that the novel had been based on the screenplay and published before the series made its debut. Regarding the social media manager’s response, PTS and the production team apologized for the oversight.