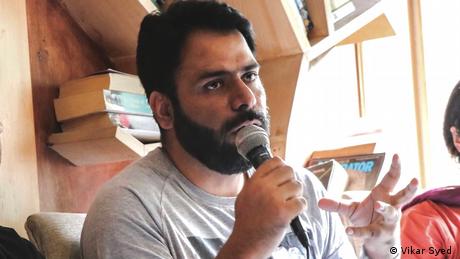 The National Investigation Agency (NIA) raided his home and office in the city of Srinagar, aided by police and paramilitary officials.

They seized his mobile phone, laptop, and some books before arresting him, his wife Samira said, adding that they confiscated her cellphone as well.

"They said it's a case of 'terror funding'," she said.

"He's not a terrorist, he's a human rights defender," Mary Lawlor said in a tweet.

The World Organisation Against Torture (OMCT) called for Parvez's "immediate release," saying they were "deeply concerned about the high risk of torture while in custody."

Several other activists and rights groups condemned the arrest and demanded that Indian authorities release him.

Who is Khurram Parvez?

The 42-year-old human rights defender serves as the program coordinator of the rights group Jammu and Kashmir Coalition of Civil Society — a Srinagar-based federation of human rights groups and individuals working in the region.

Parvez also served as the chairperson of the Asian Federation against Involuntary Disappearances (AFAD) — a Philippine-based international rights group that examines forced disappearances in Asia.

In 2006, he received the Reebok Human Rights Award for being "a courageous voice of peace and human rights in Kashmir."

Why was he arrested?

Parvez was initially detained for questioning by the NIA and was later arrested after being charged under various sections of the Indian Penal Code, and the Unlawful Activities Prevention Act (UAPA).

The UAPA anti-terror law — often described as draconian — allows authorities to deny bail and keep suspects in jail without trial for up to six months.

The charges against him include criminal conspiracy and terror funding, the Indian Express newspaper reported.

The report also quoted sources as saying that Parvez's family was informed about the arrest in the evening, adding that he would be taken to New Delhi on Tuesday.

This wasn't his first run-in with Indian authorities. He was previously arrested in 2016 a day before he was scheduled to travel to Switzerland to participate in a session of the UN Human Rights Council.

At the time he was detained under the Public Safety Act (PSA), which allows for detention without trial for up to two years. He was released after 76 days, and a court in Kashmir later ruled his arrest was illegal.