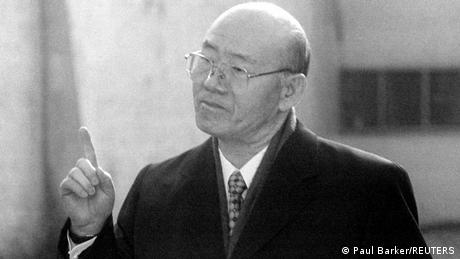 Former South Korean President Chun Doo-hwan has died at the age of 90, according to local reports Tuesday.

Chun was suffering from multiple myeloma, a blood cancer which was in remission. He passed away at his Seoul home, South Korea's Yonhap news agency reported.

The former general took power in a coup in 1979 and ruled until 1987. He was later convicted over the 1980 Gwangju massacre of pro-democracy protesters and sentenced to death. However, he later received a pardon in a drive for national reconcilliation.

Born in the farming town of Yulgok-myeon in the southeastern county of Hapcheon during Japanese rule, he joined the military straight out of high school.

He rapidly rose through the ranks and as army commander in 1979, led the investigation into the assassination of his mentor, President Park Chung-hee.

By the end of that same year he had organized a coup after taking control of the intelligence services.

"In front of the most powerful organisations under the Park Chung-hee presidency, it surprised me how easily (Chun) gained control over them and how skilfully he took advantage of the circumstances. In an instant he seemed to have grown into a giant," Park Jun-kwang, Chun's subordinate said in a later interview.

Given the nature of his rise to power, he ruled with an iron fist.

But Chun also brought South Korea economic wealth, even managing to bring the Olympics to Seoul in 1988.

He stepped down as head of the Democratic Justice Party in 1987 following huge pressure from a student-led democratic movement.

In what local media called the "trial of the century", he and coup co-conspirator Roh Tae-Woo were tried for mutiny, treason and bribery in 1995.

Survivors, military officers and investigators told the court how thousands of students were killed in Gwangju protests.

"I am sure that I would take the same action, if the same situation arose," he told the court.

Judges found him and his associate guilty saying Chun came to power "through illegal
means which inflicted enormous damage on the people." Chun was sentenced to death.

But even though he was pardoned and freed from prison in 1997, he stayed in the limelight for his unpaid fines which totalled 100 billion won ($84,125,161 million) at his deathbed.

A court then ruled in 2020 he had defamed a dead democracy activist and Catholic priest in a 2017 account of his memoirs. He received an eight-month suspended sentence for the slur.