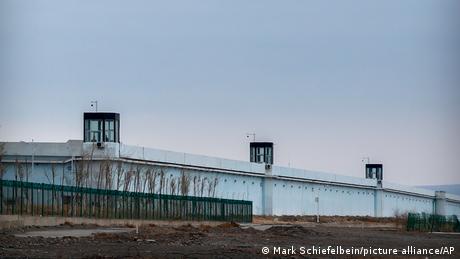 A 20-minute video featuring more than a dozen detention facilities in China's Xinjiang Uyghur Autonomous Region has offered fresh evidence and renewed the discussion around China's large-scale crackdown on ethnic minorities in the region.

The video was filmed by a Chinese man named Guanguan, who went to Xinjiang after reading a series of articles from US news outlet BuzzFeed News, indicating the locations of several detention centers in the region.

His video, which was originally posted to YouTube in October, has attracted the attention of researchers and academics who have been focusing on China's large-scale crackdown on ethnic minorities in Xinjiang. Alison Killing, an architect who worked with BuzzFeed News to create a map of satellite images of the camps, said the new information from the video confirms what they believe to be happening in Xinjiang.

"When you are working with satellite images, you are always relying on other sources of information to corroborate what you are looking at," she told DW. "It can be on-the-ground videos, which is what we see here."

Other forms of corroboration that researchers like Killing rely on include interviews with former detainees and information from journalists who visit the detention facilities. She added that Guanguan's video helps to confirm whether many facilities are prisons or detention centers.

Rayhan Asat, a Uyghur human rights lawyer and senior fellow at the Atlantic Council's Strategic Litigation Project, said the unfiltered video footage adds to the ongoing documentation of the crackdown that is taking place in Xinjiang and "defeats the state propaganda and disinformation of 'Happy Uyghurs.'"

"I hope more Chinese people like this gentleman will stand up for their fellow citizens," Asat told DW.

"I visited Xinjiang once in 2019 on a bike trip, but the purpose of my visit this time is completely different," said Guanguan in the video. "I read a story on BuzzFeed News, in which the reporters identified the locations of many detention centers in Xinjiang through cross-comparing satellite imagery."

He followed the Mapbox satellite map created by the news outlet, along with satellite images from China's Baidu Maps service to film 18 detention facilities across eight cities in Xinjiang. While the video was uploaded to his YouTube channel last month, it is believed that he went to Xinjiang and filmed those facilities in 2020, based on his tweets.

Guanguan began his trip in the eastern city of Hami, where he drove by the Hami Compulsory Isolated Drug Rehabilitation Center. The building wasn't shown on Baidu Maps, and the bars on the window as well as the barbed wire fencing led him to suspect that the center could be a detention facility.

Next, he went to the Mori Kazakh Autonomous County in Xinjiang, where he captured footage of a detention center with watchtowers and surrounded by surveillance cameras. He later drove by the Mori County Detention Center. Neither of the facilities were marked on the Baidu map.

When he arrived at Urumqi, the capital of Xinjiang, he drove by several facilities with watchtowers and high barbed-wire fences, which are all typical features of detention facilities in Xinjiang. Slogans like "reform through labor and cultural transformation" were also written on the walls of some of the buildings.

Complexes that can hold 'thousands'

In July, the Associated Press (AP) visited a cell in the Urumqi No. 3 Detention Center in Xinjiang's Dabancheng, describing the facility as "the largest in the country and possibly the world, with a complex that sprawls over 220 acres."

The AP estimated that "the center could hold roughly 10,000 people and many more if crowded, based on satellite imagery and the cells and benches seen during the tour."

Over the last few years, the Chinese government has described the mass detention of roughly a million or more ethnic minorities in Xinjiang as a "war against terror." Uyghurs have reportedly been put into internment camps across Xinjiang and female survivors of the camps have accused the Chinese government of systematically raping or sexually abusing Uyghur women in the camps.

Guanguan also mentioned in the video that during his first trip to Xinjiang, some local Han Chinese people told him that a large number of Uyghurs had been moved to other regions as cheap laborers.

Since Guanguan revealed his face in the Xinjiang video, many people have expressed concerns over his safety. In a new video uploaded to his YouTube channel on Friday, Guanguan said he hopes that the footage of the detention facilities can be passed on as evidence. "I don't have the ability to directly challenge the Chinese government, but this is what I can do within the limits of my power," he said.

Last Wednesday, Xu Guixiang, the spokesperson of the Xinjiang regional government, said that the region has taken " firm, resolute and effective" measures to counter terrorism and made achievements.

Even though there are different voices on Xinjiang's policies on countering terrorism and deradicalization, history will justify them, Xu was quoted as saying by the Chinese state-run Global Times newspaper.

For those who want to use topics on Xinjiang to interfere in China's domestic affairs, their attempts are doomed to fail, he added.

"I want to stress that Xinjiang-related issues are in essence about countering violent terrorism, radicalization and separatism, not about human rights or religion," the ministry's spokesperson Zhao Lijian said.

"In the face of the grave and complex counterterrorism situation, Xinjiang has taken a host of decisive, robust and effective deradicalization measures. As a result, Xinjiang has seen no violent terrorist case for five years in a row."