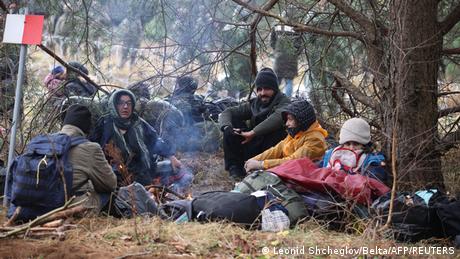 When the police officer saw that we had food and water in our car, he became suspicious. My translator and I were crossing a checkpoint in Poland near the border with Belarus, one of many restrictive measures the government has imposed to prevent migrants from passing into the country. "Is this for the refugees?" he asked. He took our IDs and wanted to take us in for questioning, but my translator managed to convince him the food was just for us and that we had no intention of entering the exclusion zone — a strip of densely wooded land along the border.

Survival in no man's land

After a moment of relief, I realized what this meant: That the starvation, dehydration and hypothermia migrants face as they hide in the forest from border guards is not an unfortunate consequence of a state of emergency. It's part of the strategy.

Checkpoints don't just keep migrants out of Poland, they keep concerned citizens from helping the migrants survive in this no man's land. Emergency services are allowed to answer rescue calls, and border guards told me they do everything they can to save lives. Still, but authorities know very well that migrants will only call for help when they've given up all hope that they will be able to evade authorities and have a chance to apply for asylum in the European Union. Often, they wait too long. At least 11 migrants have died while attempting the crossing.

This kind of cruelty is not totally new to the refugee crisis. In some ways, it's a continuation of what has been happening on the Mediterranean Sea for years; where rescue ships are treated as smuggler ships and prevented from going out to rescue migrants from drowning, sometimes arriving only after tragedy has struck.

Yet on the Mediterranean, there was never a total ban on media and civil society trying to find out exactly what is going on and to help. This month, a man drowned in the river between Poland and Belarus. Last week, a Syrian man and woman called for help. They had lacerations and apparent stab wounds. How did this man drown? Who stabbed these people? In the EU, you would expect journalists and lawyers to be able to investigate. But you would be wrong. The rules, at least on the EU's eastern border, seem to have changed.

One glint of hope is how when authorities have failed to save lives, citizens have — literally — come to the rescue. Where big international organizations like Doctors without Borders or Save the Children are barred from doing their work, local residents often have access, because the Polish police cannot stop those who live in the border region from moving freely.

Some residents inside the exclusion zone have put lights in their windows in the hopes of signaling to migrants that they can ask for help there. This week, I met a woman from Hajnowka, Poland, who read online about people dying in the forest near her home. Just a few days ago, she joined an informal group called Granica, Polish for "border," which helps get aid to migrants and puts pressure on Polish authorities to allow them to claim asylum.

Everyone I talked to on the ground acknowledged that this is a complex situation. Belarus' authoritarian leader Alexandr Lukashenko instigated the crisis by opening up a migration route at an EU land border, where Belarusian border guards have been seen physically shoving would-be asylum seekers under Poland's fence.

Yet the Polish government's response is a new low for the EU in this migration crisis. Brussels seems most concerned about the threat of Lukashenko. But by transforming a 400-kilometer-long strip of land along the EU's eastern border into a democracy-free zone, it's already ceded some territory to authoritarianism.