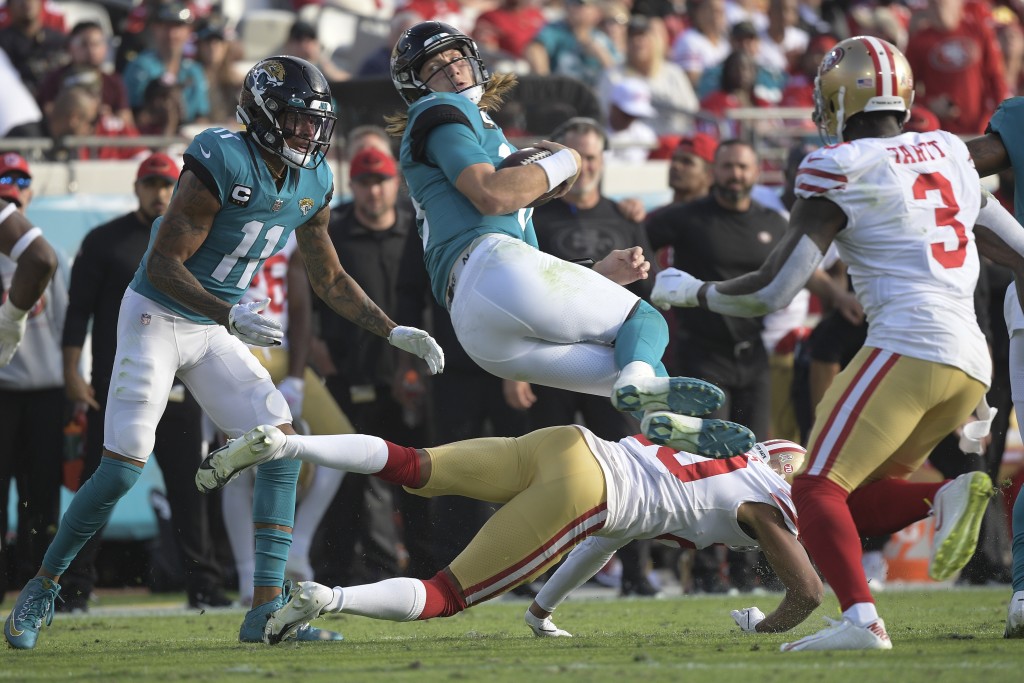 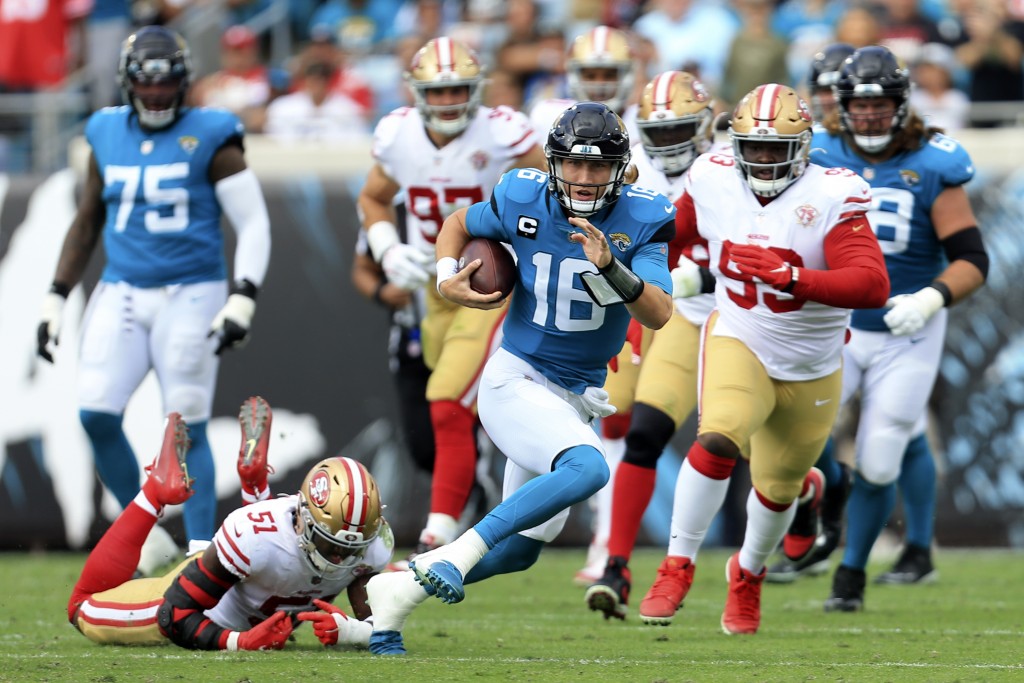 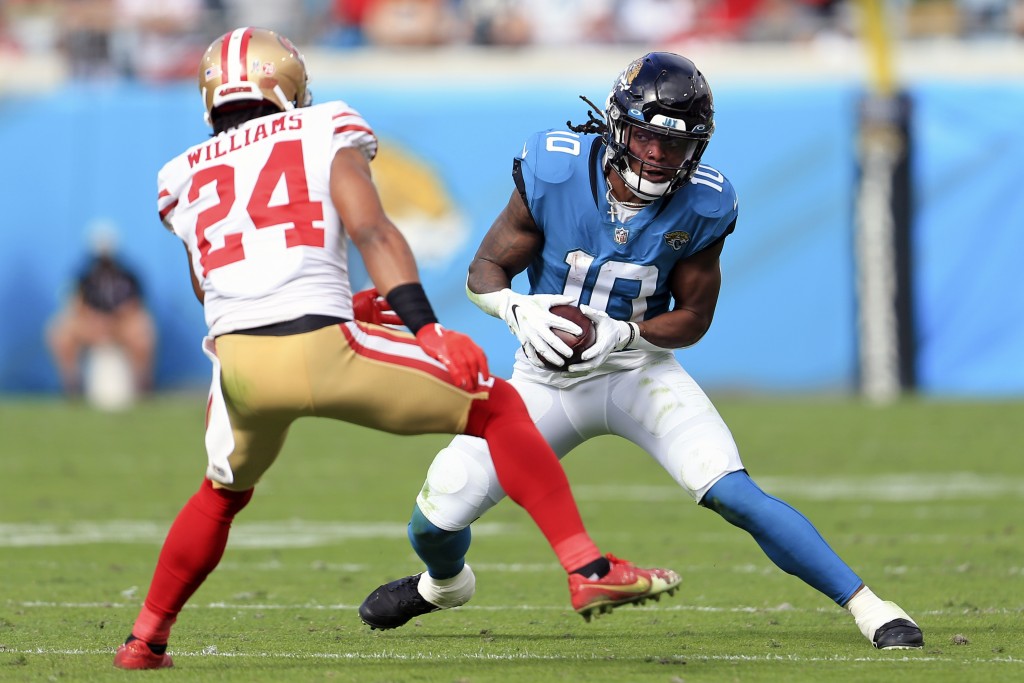 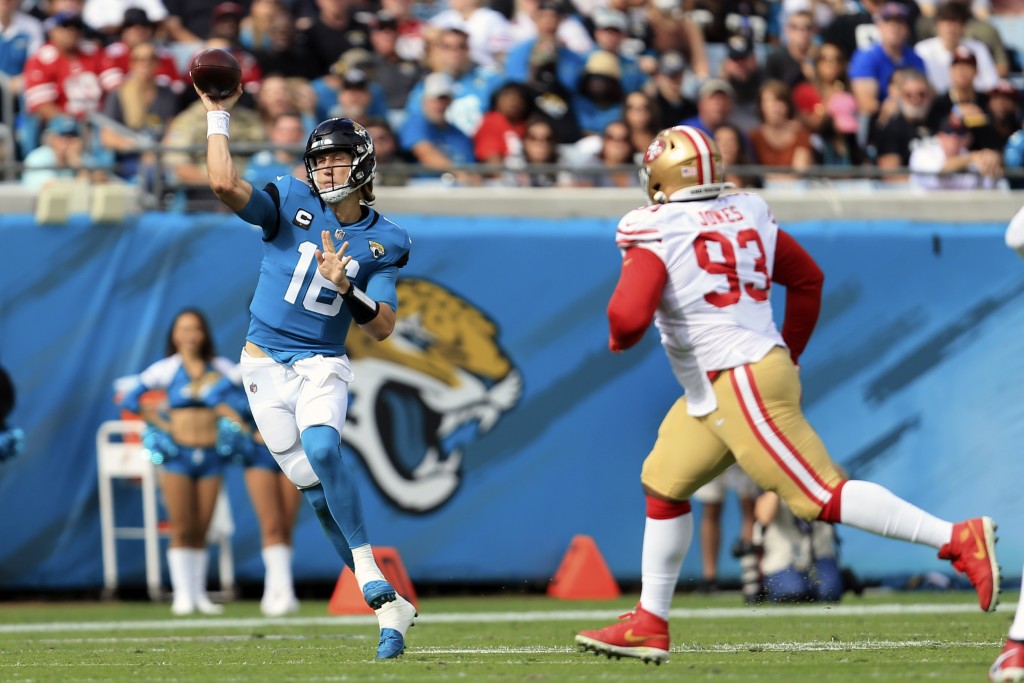 JACKSONVILLE, Fla. (AP) — Jacksonville’s offense has regressed to the point where coach Urban Meyer is fielding questions about potential staff changes with nearly two months left in the season.

The Jaguars (2-8) are averaging 264.5 yards and 10.8 points over their last four games, a stretch of futility that has made rookie quarterback Trevor Lawrence’s development the main topic of conversation inside and outside the facility.

Lawrence threw for fewer than 160 yards for the third consecutive week in a 30-10 loss to San Francisco on Sunday. It was also his third straight game without a touchdown pass.

“Obviously, that’s tough,” said Lawrence, who’s been plagued by penalties, dropped passes and poor offensive line play. “It’s a bad feeling. … There’s not a magic pill, like this is what we need to do to fix it. We all just have to take ownership and be better. Until we do that, it’s going to be the same thing.”

CBS Sports, citing anonymous sourced, reported before Sunday's game that Jacksonville's coaches are at odds over how to use Lawrence, and added that staff changes are expected. The report said some coaches are pushing back on Meyer’s preference to run more simplified run-pass options that helped Lawrence become so successful at Clemson.

Similar discussions came up earlier this season, when Meyer suggested “Trevor has got to become Trevor a little bit.” Veteran NFL offensive coordinator Darrell Bevell countered with “this is not Clemson where we are pulling the ball and running downhill inside and letting linebackers and safeties hit him.”

Meyer insisted Sunday that there's no internal strife and no decisions have been made about coaching changes.

“I have high expectations," he said. "When someone’s not performing well, yeah, we have hard conversations, but that’s the game of football. …

Linebacker/defensive end Josh Allen had a career-high 10 tackles against the 49ers and a forced fumble. He didn’t have a quarterback hit for the first time since Week 4, but he continued an impressive run that’s proven he’s worthy of a lucrative contract extension following his third year.

The seventh overall pick in the 2019 draft already has a career-high 51 tackles this season to go along with 5½ sacks, an interception, a forced fumble and a fumble return. He has 18½ sacks in 34 career games.

Jacksonville was penalized at least eight times for the fifth consecutive week, a troubling trend for Meyer. The Jaguars are tied for second in the NFL with 30 pre-snap flags, including a delay-of-game penalty Sunday because punter Logan Cooke didn’t get on the field fast enough on one fourth down in the fourth quarter. Cooke’s strange miscue came after Lawrence was sacked on a third-and-25 play near midfield, setting up an obvious punting situation.

Chief of Staff Fernando Lovo, who was Meyer’s right-hand man at Florida and Ohio State, is leaving to return to Texas and become the Longhorns’ senior associate athletic director for facilities and operations. Lovo spent four years (2016-20) as Texas football’s chief of staff. He also spent time at the University of Houston since working under Meyer in Gainesville and Columbus.

“Fernando’s like a son to me, so all positive,” Meyer said.

Safety Rayshawn Jenkins, one of the team’s seven captains, was ejected in the second quarter for trying to punch receiver Jauan Jennings. He is likely to get fined.

It was the second mistake in the game for Jenkins, who also had an unsportsmanlike conduct penalty earlier in the season. He was flagged for holding on a third-and-5 play that gave the Niners a new set of downs. They went on to kick a field goal and cap a 20-play opening drive that took a little more than 13 minutes.

“We’re just going to have a grown-man conversation,” Meyer said. “You can’t do that, especially in your position, any position.”

14 – consecutive games Jacksonville has lost to NFC teams. The Jags’ last victory against someone from the other conference came in the 2018 season opener against the New York Giants.

The Jaguars get another chance to end its NFC skid at home against Atlanta next Sunday. The Falcons have been outscored 68-3 in consecutive losses to Dallas and New England.