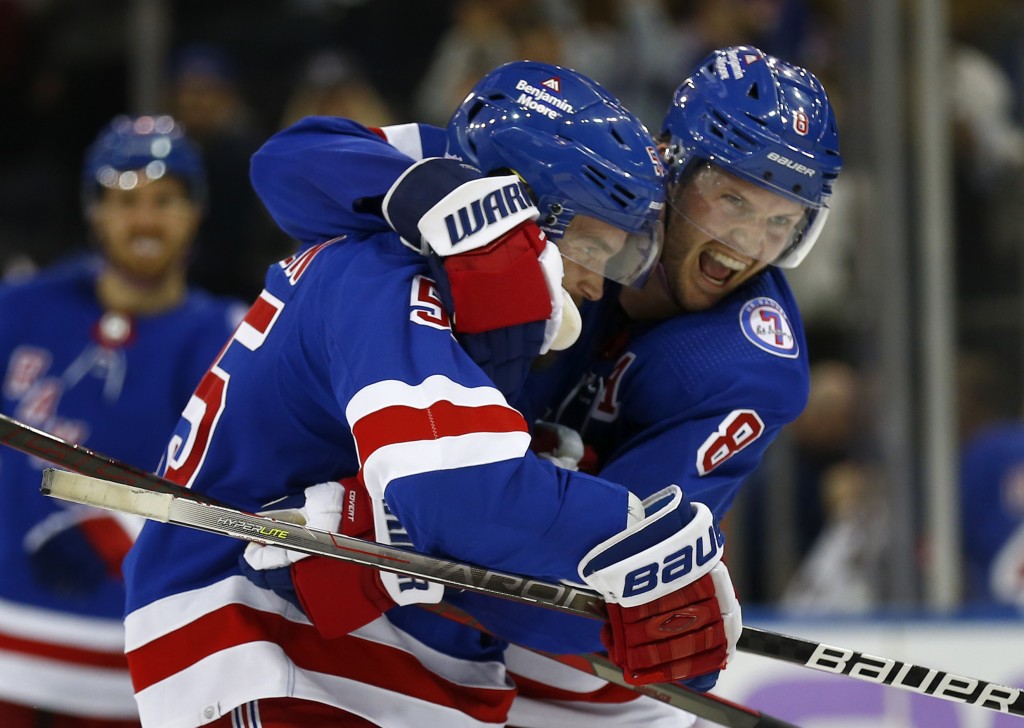 Lindgren’s heroics came after the teams scored three goals each in a wild second period, including four goals in an 82-second span.

Chris Kreider, Jacob Trouba, Kaapo Kakko and K’Andre Miller all scored for the Rangers. Alexander Georgiev had 14 saves and was replaced by Igor Shesterkin, who had four saves in the third.

Minnesota rallied in the third period to tie it at 4 on two empty-net goals by Kevin Fiala and Joel Eriksson Ek over a 2:09 stretch. But the Wild couldn’t score in overtime during a power play that lasted about a minute and half.

Tampa Bay also got two goals from Anthony Cirelli and one each from Pat Maroon and Alex Barré-Boulet. Elliott made 28 saves in regulation.

Marcus Foligno and Brandon Duhaime had the other goals for Minnesota, and Kaapo Kahkonen stopped 20 shots.

Travis Boyd had a goal and an assist for the Coyotes, who have won consecutive games for the first time this season. On Friday night at home, Clayton Keller scored 25 seconds into overtime to give the Coyotes a 2-1 comeback victory over Detroit.

Brendan Lemieux scored for the Kings, who have lost four straight following a seven-game winning streak. Jonathan Quick had 25 saves.

VANCOUVER, British Columbia (AP) — Marc-Andre Fleury stopped 40 shots in his first shutout of the season to give Chicago a win over Vancouver.

Brandon Hagel scored the game’s lone goal with a third-period tip-in, while Fleury earned his 68th career shutout and improved his recent record against Vancouver to 13-0-2.

Thatcher Demko stopped 23 of 24 shots for the Canucks, who controlled play through much of the first two periods but stuttered in the third, giving up an early goal and struggling to generate offense.

SEATTLE (AP) — Jaden Schwartz had a goal and three assists and the Seattle Kraken beat the Washington Capitals 5-2 to snap a six-game losing streak.

Calle Jarnkrok and Yanni Gorde each added a goal and an assist and Schwartz reached 401 career points as Seattle won for the first time since Nov. 4.

Jared McCann and Adam Larsson also scored for Seattle, which got 37 saves from Philipp Grubauer.

Alex Ovechkin scored his 15th goal of the season and Vitek Vanecek had 26 saves for the Capitals, who hadn’t lost since Nov. 6.

Johnny Gaudreau and Noah Hanifin, who both played collegiate hockey nearby for Boston College, each had a goal for the Flames, who posted their third straight win and improved to 9-2-2 on the road. Mikael Backlund also scored for Calgary, and Matthew Tkachuk had two assists.

Jeremy Swayman made 27 saves for Boston, which had its three-game winning streak snapped.

Ondrej Kase also scored as Toronto improved to 11-2 in their last 13 games in the opener of a four-game road trip that includes the next three games in California. Woll, a 2016 third-round draft pick, picked up his second career win in two starts.

Ilya Sorokin stopped 37 shots for the Islanders, who lost their sixth straight game — all in regulation — and remained winless in two at their brand new $1.1 billion UBS Arena next to Belmont Park. New York has been outscored 27-6 during its losing streak.