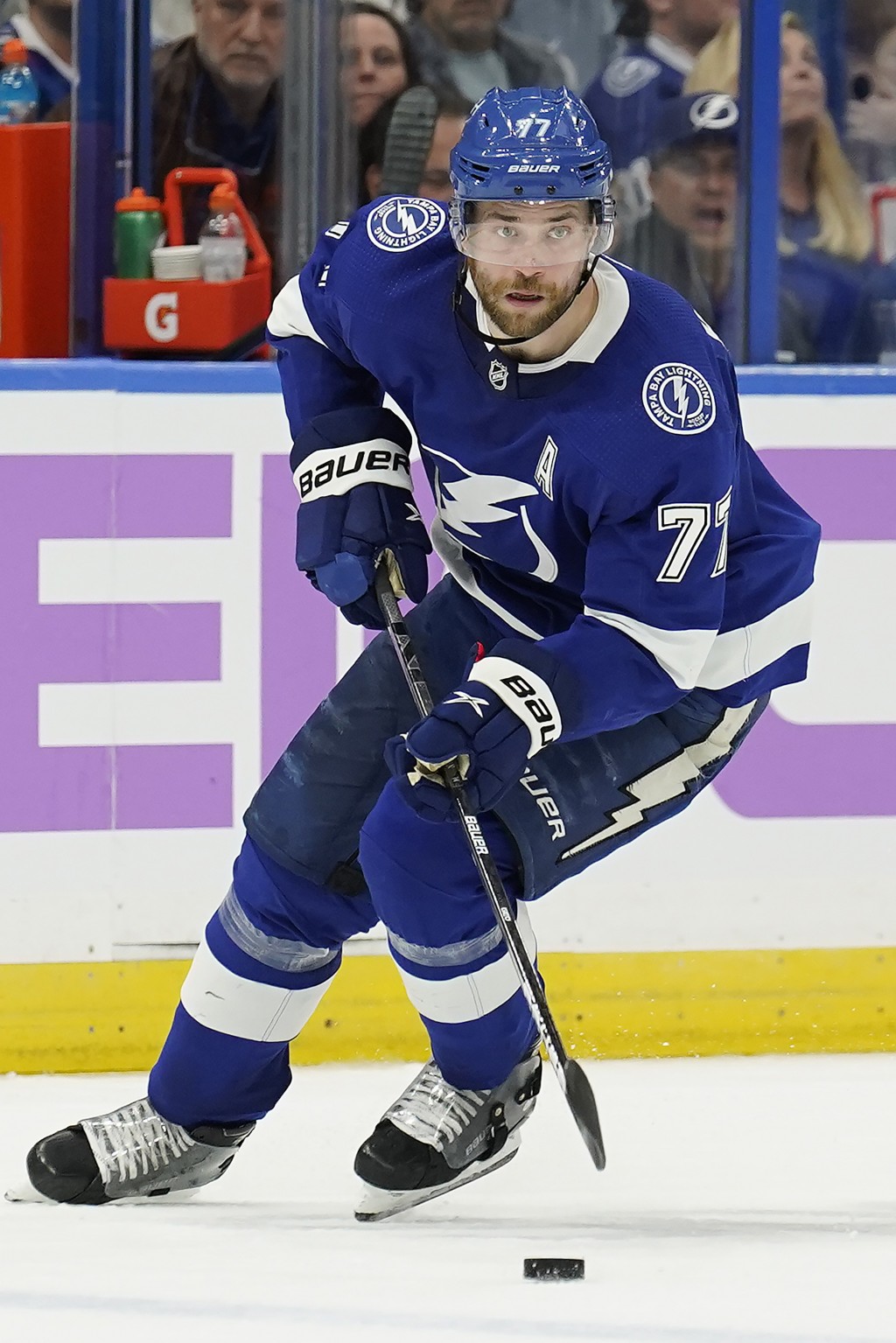 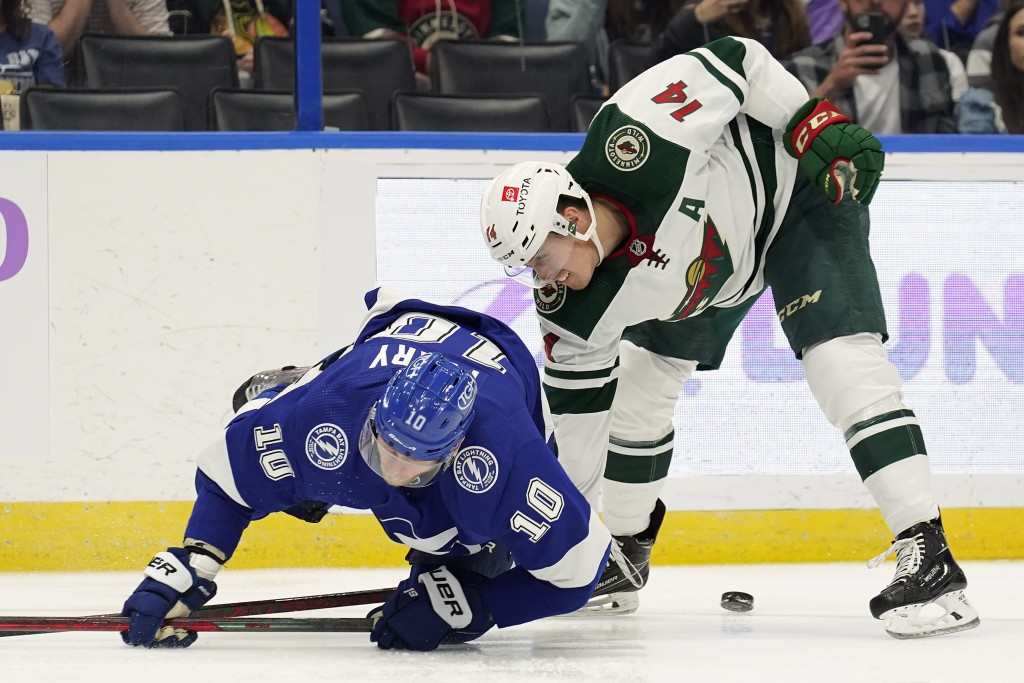 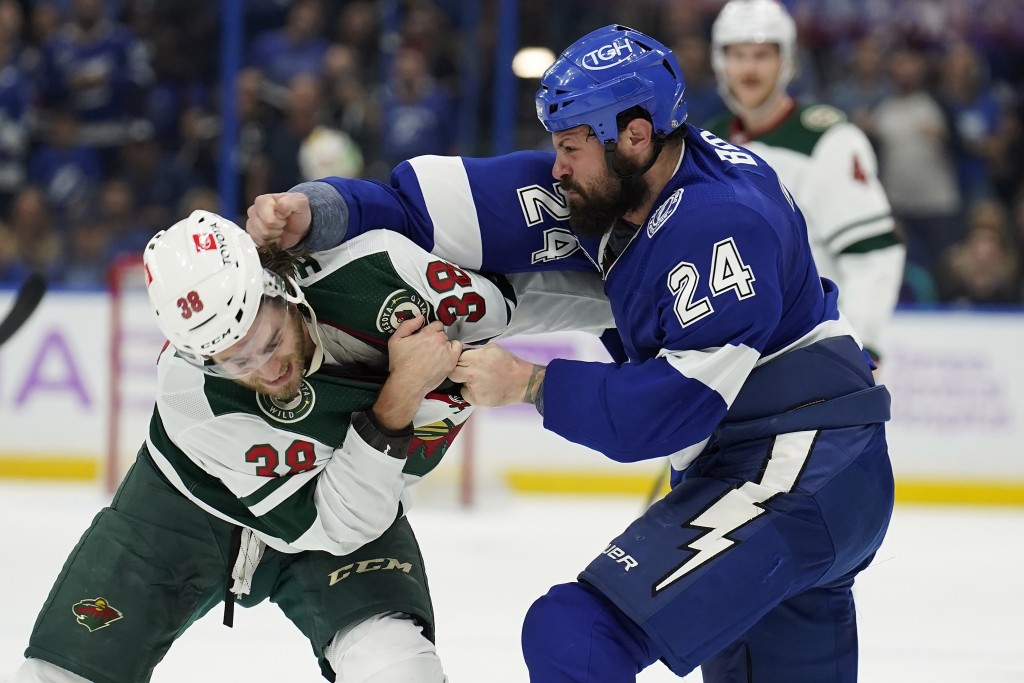 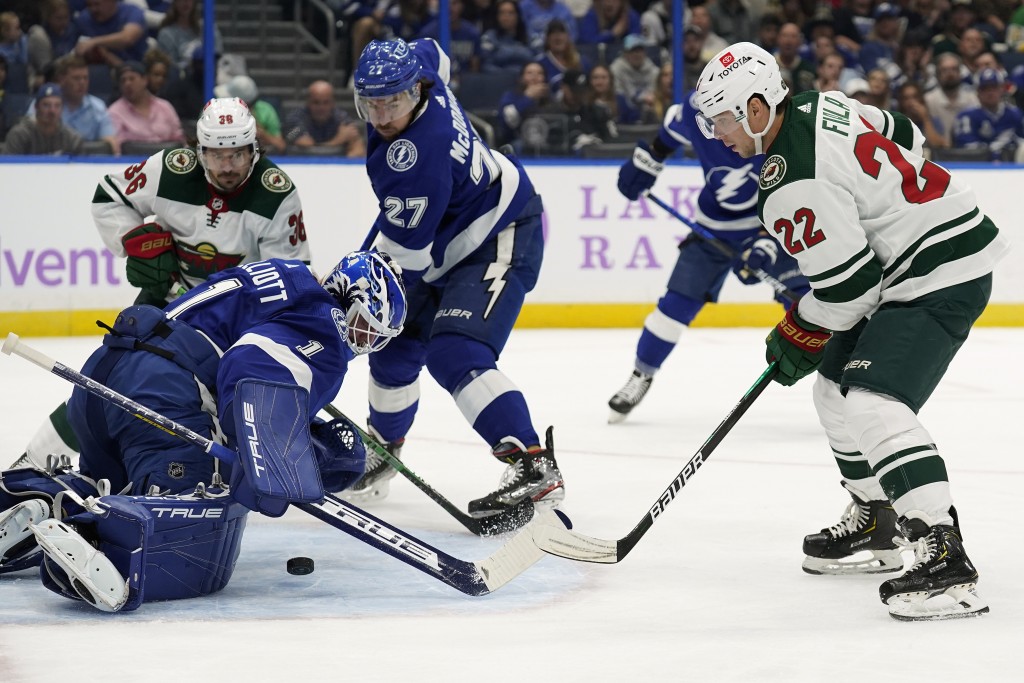 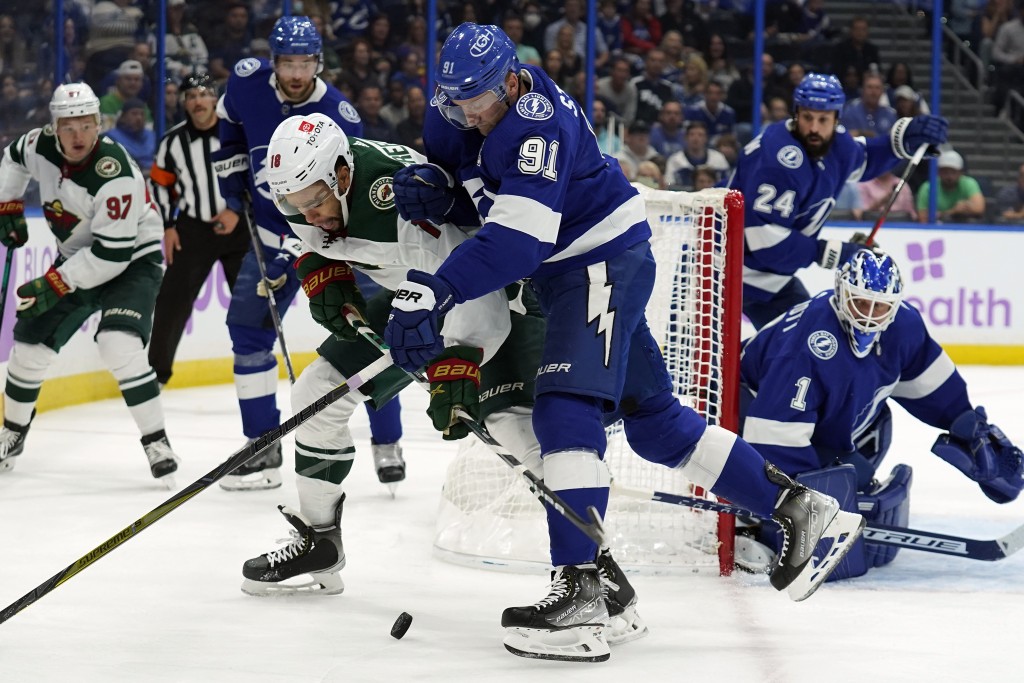 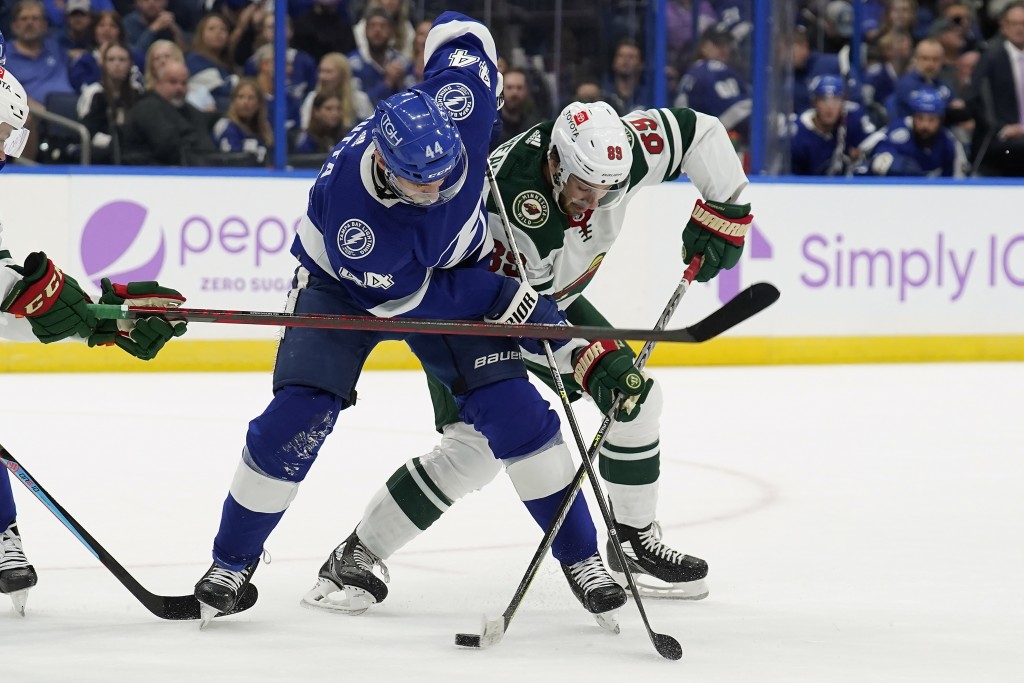 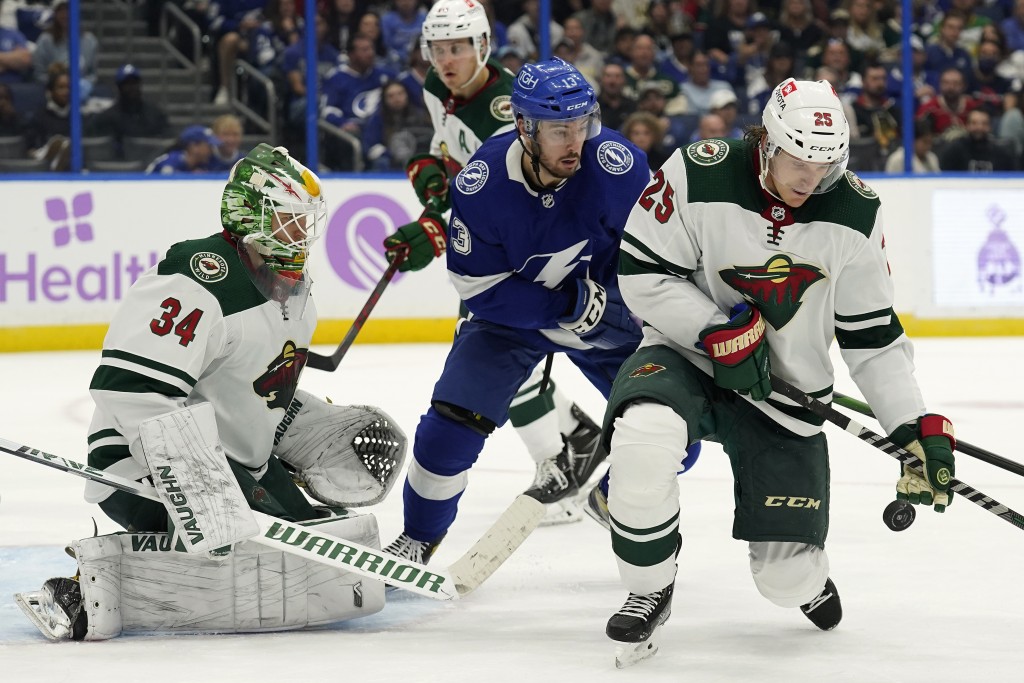 Minnesota rallied in the third period to tie it at 4 on two empty-net goals by Kevin Fiala and Joel Eriksson Ek over a 2:09 stretch. But the Wild couldn't score in overtime during a power play that lasted about a minute and half.

Tampa Bay also got two goals from Anthony Cirelli and one each from Pat Maroon and Alex Barré-Boulet. Elliott made 28 saves in regulation one day after the Lightning blew a two-goal third-period lead in a 5-3 loss to New Jersey.

Tampa Bay's Ondrej Palat had his shot at the empty net hit the post before the Wild knotted it up.

“Listen, you're eventually going to blow leads,” Lightning coach Jon Cooper said. “The breaks went the other team's way in that last couple minutes. Good for them, they earned them. In saying that, the guys pulled it out.”

Marcus Foligno and Brandon Duhaime had the other goals for Minnesota, and Kaapo Kahkonen stopped 20 shots. The Wild also had a pair of empty-netters in a 5-4 loss Saturday to Florida.

Cirelli put the Lightning up 3-2 when he scored on an in-close rebound with 2:53 left in the second. Barré-Boulet made it 4-2 from the low right circle after Stamkos' shot went off Wild defenseman Jon Merrill at 9:19 of the third.

Jordan Greenway had a short-handed backhander early in the third trickle past Elliott but Barré-Boulet swiped it safely out of the crease. Barré-Boulet, who had been sent to Syracuse of the AHL on Friday, was recalled before the game.

“I was a little scared I was going to run out of energy,” said Barré-Boulet, who had a 4:15 a.m. wake-up call for a flight out of Syracuse.

Both teams were coming off losses Saturday and played a spirited first period that saw Tampa Bay take a 2-0 lead midway on a power-play goal by Cirelli and with Maroon's tally.

Foligno cut the deficit on a late first-period power play goal before Duhaime tied it at 2 early in the second.

Minnesota’s Ryan Hartman was sent off with about 3 1/2 minutes left in the first for tripping after slew-footing Ross Colton and came back to fight Zach Bogosian 9 seconds after the penalty expired.

Wild: Defenseman Jared Spurgeon sat out with a lower-body injury that he received in Saturday's game. He will re-evaluated Monday.

“So, are we worried?," Evason said. "Sure, but hopefully it shakes down not as bad."

Lightning: Center Brayden Point will be sidelined indefinitely due to an upper-body injury, the team announced. Point crashed hard into the end boards on Saturday and appeared to be favoring his left shoulder-arm afterwards. Cooper said the team is awaiting for additional information about the injury. .... Tampa Bay is also without star right wing Nikita Kucherov (lower body), who missed his 14th game and is expected to be out another four to six weeks.

In a matchup of backup goalies, Elliott appeared in his third game of the season and Kahkonen his fourth. … Tampa Bay D Victor Hedman had an assist to extend his point streak to five games (five, seven points). … Maroon has goals in consecutive games.