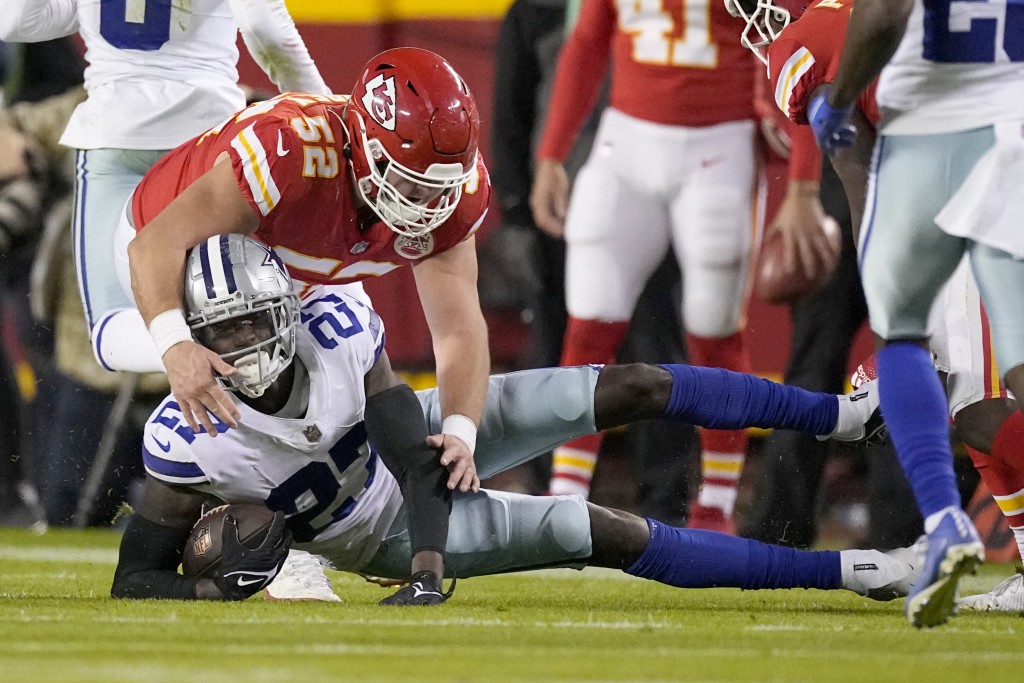 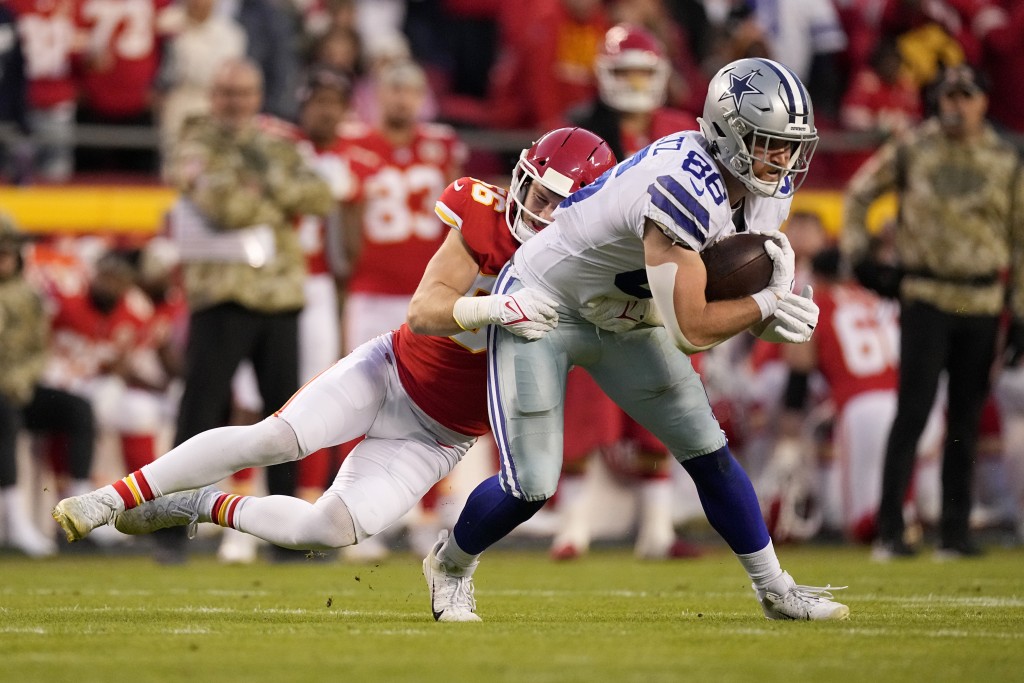 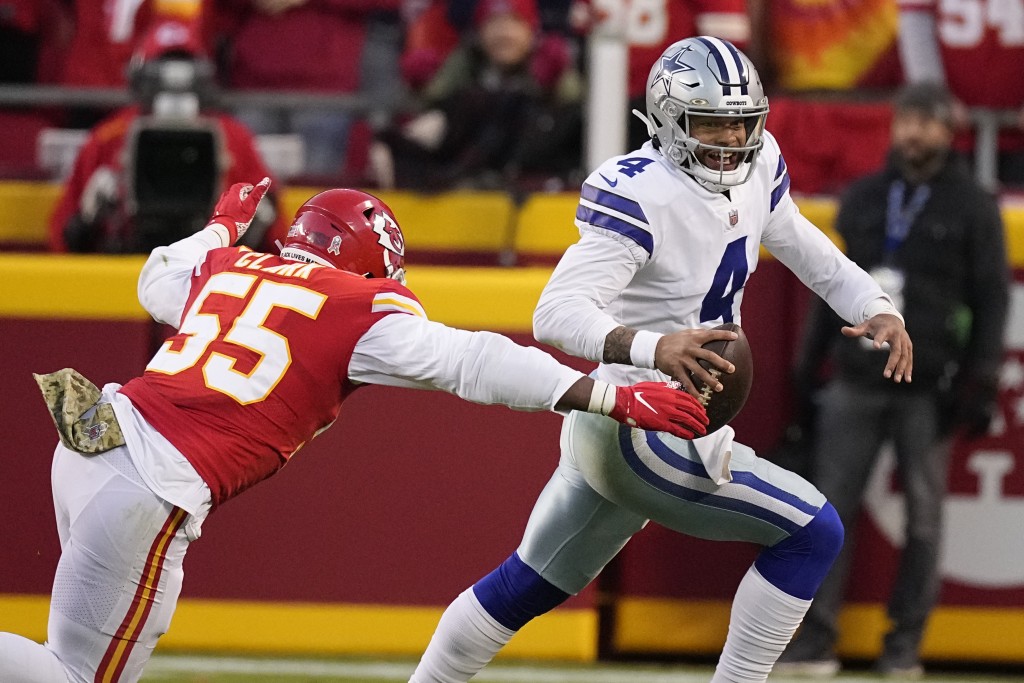 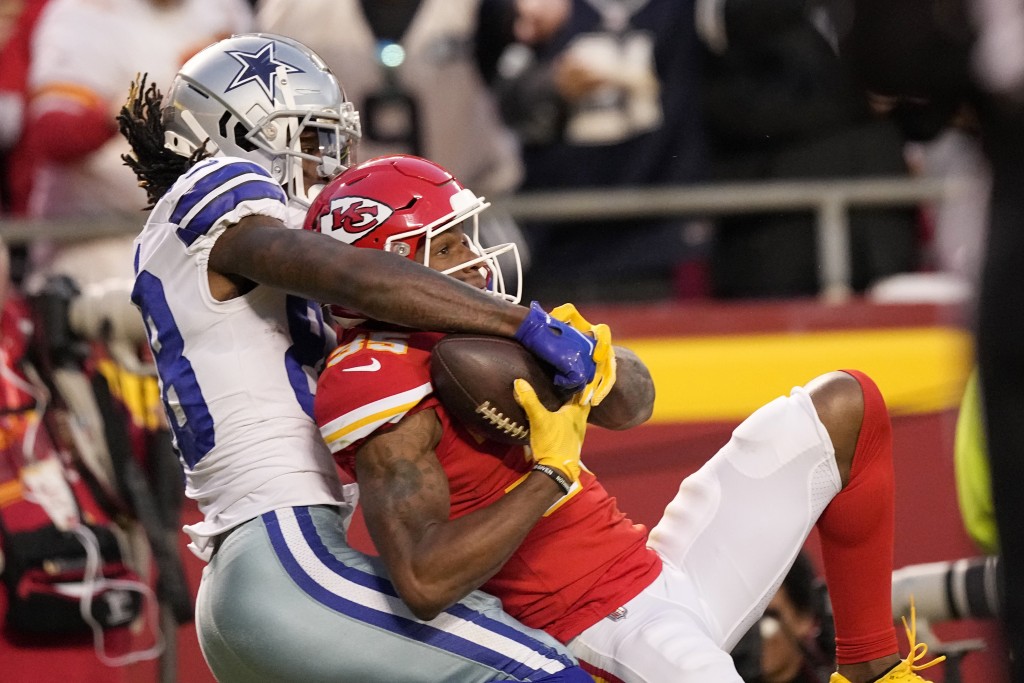 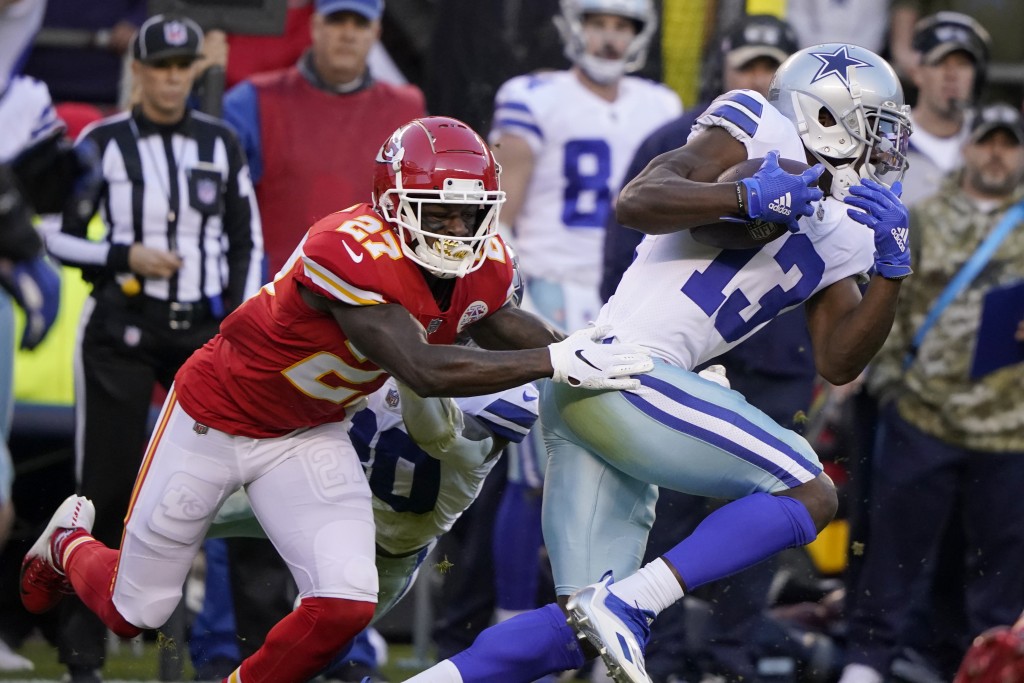 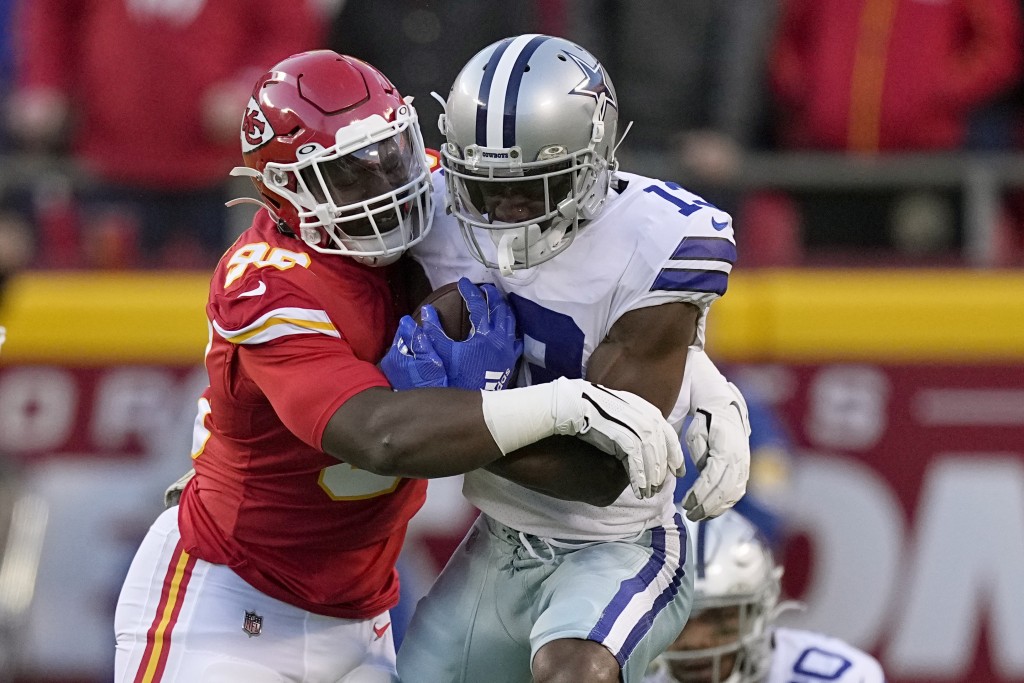 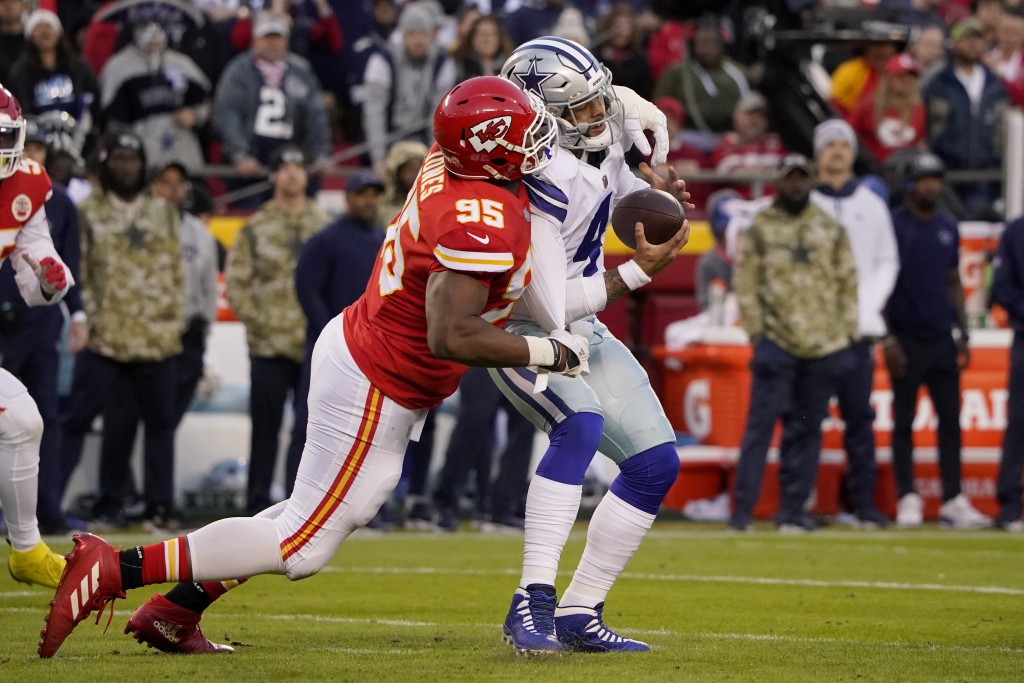 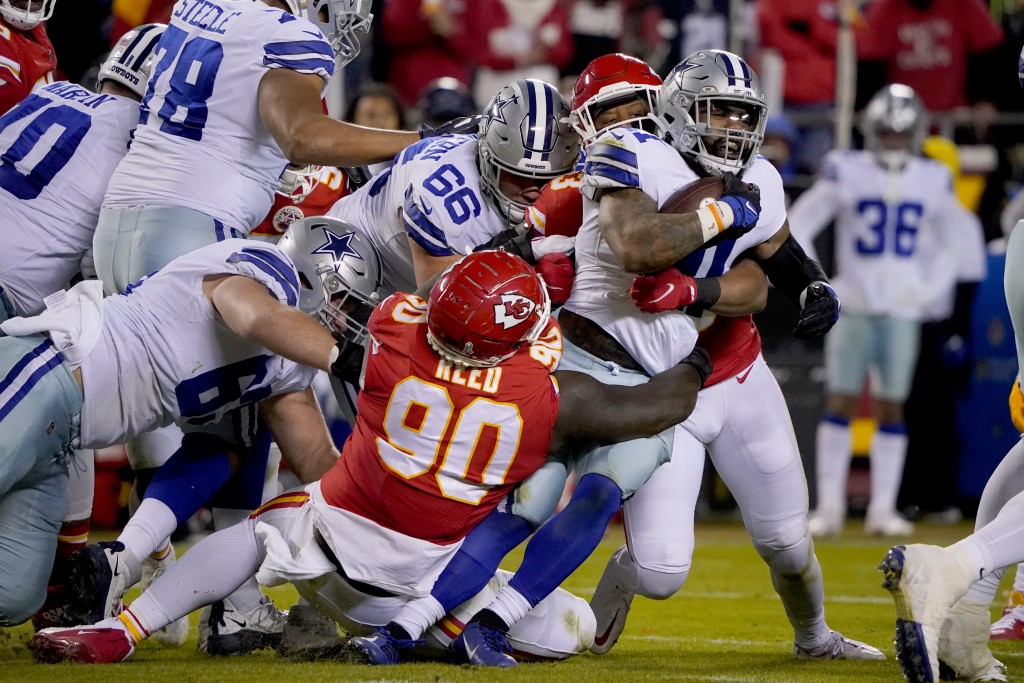 KANSAS CITY, Mo. (AP) — Injuries and COVID-19 put the Dallas Cowboys in a predicament against the Kansas City Chiefs on Sunday.

It probably won't be much better in four days' time.

Already missing standout left tackle Tyron Smith because of an ankle injury, the Cowboys learned late this week playmaker Amari Cooper had tested positive for the coronavirus. Then, just before halftime Sunday, fellow wide receiver CeeDee Lamb sustained a concussion as he went up for a jump ball in the end zone and did not return for the second half.

Throw in a tweaked ankle for Ezekiel Elliott and it's no wonder the Cowboys, whose league-leading offense had scored with such ease against the Falcons last weekend, didn't reach the end zone at all in a 19-9 loss to the Chiefs.

“We went through everything we went through last year for moments like this, to move forward, for guys to step forward and make the most of their opportunity," said Dak Prescott, who was held to 216 yards passing, picked off twice and sacked five times. “We've had different guys including myself go in and out. We have to win with them.”

Now, the question is whether any of the stars will be back against the Raiders on Thanksgiving Day.

Lamb, the Cowboys' leader in catches, yard and touchdowns, had three catches for 14 yards during a quiet first half in Kansas City when he went deep down the sideline just before halftime. Lamb jumped up against Charvarius Ward in the corner but came down hard on the ground while the Chiefs defensive back wrestled the ball away for a pick.

Lamb was helped by trainers to the locker room, evaluated for a concussion and did not return to the sideline.

The Cowboys already knew they would be without Cooper, who was second to Lamb in all those categories with 44 grabs for 583 yards and five scores. Cooper is unvaccinated, so the timing of his move to the COVID-19 reserve list Friday means that under NFL rules he would not be cleared in time to return Thursday against Las Vegas.

Asked whether Cooper was selfish by being unvaccinated, Cowboys coach Mike McCarthy replied: “I mean, frankly, those decisions are all part of this quest we're under. Those things are dealt with on an individual basis.”

Prescott wasn't willing to criticize his teammate's decision, either.

“It's unfortunate not having him,” Prescott said, “but to say the decision he made — being vaccinated, I could get it and be out two games. Let's not knock the guy for making that decision. That's my teammate. That's my brother. We're going to support him. That's what I said way back in training camp. It's unfortunate not having him but he'll come back.”

The way the Chiefs pressured Prescott, not having Smith at left tackle to anchor the offensive line might have been the biggest loss of all. The Chiefs dropped Prescott five times — 3 1/2 of those sacks by Chris Jones — and prevented him from having a chance to look past his first or second read almost the entire way.

Without the Cowboys' top two targets in the passing game, tight end Dalton Schultz led the way with six catches for 53 yards. Michael Gallup was the most productive of the wide receivers with five catches for just 44 yards.

The Cowboys finished 5 of 15 on third down, totaled 276 yards of offense — nearly 160 below their season average — and committed three turnovers. The only points they managed came on three field goals by Greg Zuerlein.

“It was tough to get in a rhythm throwing the ball, running the ball — neither was working for us,” Prescott said. “When you're playing on the road and struggling to do that, it's tough to win.”