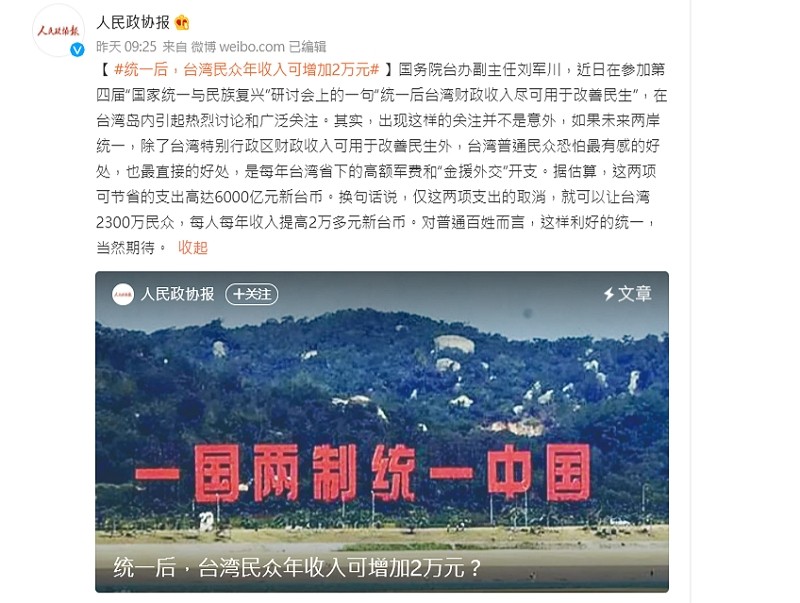 TAIPEI (Taiwan News) — A claim by a Chinese Communist Party (CCP) mouthpiece that Taiwanese will see an increase in income after unification has drawn ridicule from both sides of the Taiwan Strait.

The people of Taiwan are set to gain NT$20,000 (US$718) in additional annual income if Taiwan is brought into China's fold, suggested a Saturday (Nov. 20) article by the CPPCC Daily, a newspaper run by the Chinese People's Political Consultative Conference.

The article argues that after unification, the NT$600 billion Taiwan spends annually on defense and so-called money diplomacy can be spared and channeled to the 23 million Taiwanese. “This is probably the most direct benefit to the masses,” it reads.

The suggestion has invited derision from the online community. One Taiwanese netizen said it’s ludicrous to sacrifice freedoms for a mere NT$20,000, while another said, “I’d rather give Xi Winnie the Pooh NT$20,000 a year to quit abusing Taiwan,” according to the Liberty Times.

Even Chinese netizens were quick to level criticisms, with some questioning the logic of transferring national expenditures to personal income and others lamenting the predicament facing their own people: “What about the 600 million impoverished who can barely make ends meet with a monthly income of 1,000 renminbi (US$157)?”

Interestingly, one Chinese netizen made the statement that such brazen propaganda only makes war with Taiwan more unlikely. “If they’re serious about attacking Taiwan, they wouldn’t have bothered to use such tactics intended to cause its internal conflict,” reported UDN.