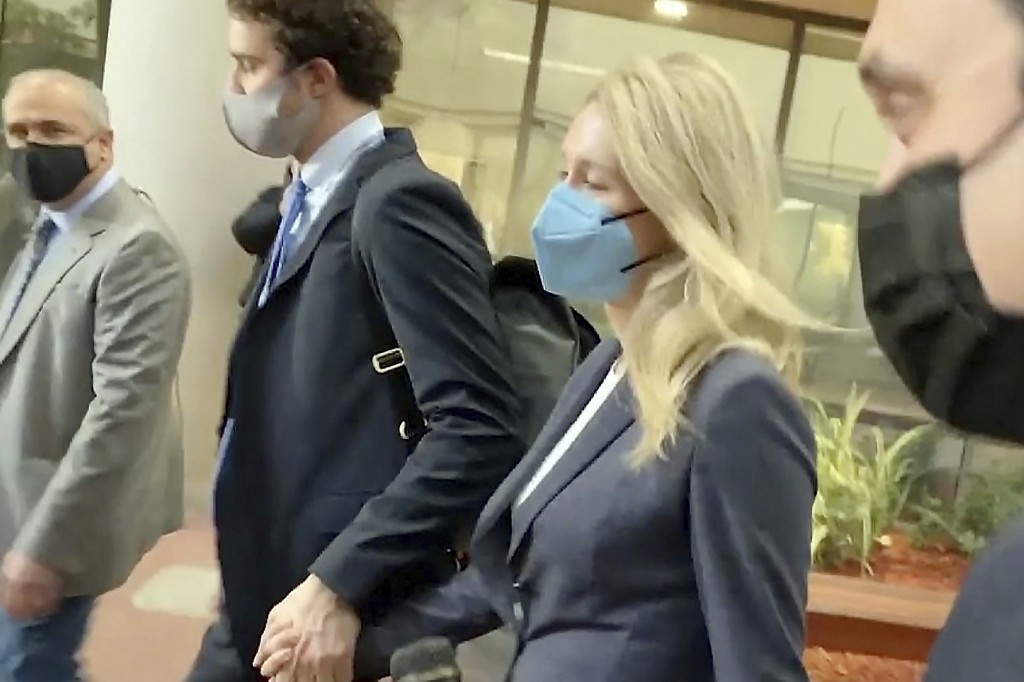 SAN JOSE, Calif. (AP) — Fallen Silicon Valley star Elizabeth Holmes, accused of bamboozling investors and patients about her startup Theranos and its medical device that she said would reshape health care, took the witness stand late Friday in her trial for criminal fraud.

The surprise decision to have Holmes testify so early in her defense came as a bombshell and carries considerable risk. Federal prosecutors, who rested their months-long case earlier on Friday, have made it clear that they're eager to grill Holmes under oath.

Prosecutors aren't likely to get that chance until after the Thanksgiving holiday weekend. Holmes attorney Kevin Downey told U.S. District Judge Edward Davila that he expects to continue steering her through her story when she returns to the stand Monday and again Tuesday in a San Jose, California, courtroom before the trial breaks until Nov. 29.

Prosecutors called 29 witnesses to support their contention that Holmes endangered patients' lives while also duping investors and customers about Theranos’ technology. Among them was Gen. James Mattis, a former U.S. defense secretary and former Theranos board member, who explained how he was first impressed and ultimately disillusioned by Holmes.

They also presented internal documents and sometimes salacious texts between Holmes and her former lover, Sunny Bulwani, who also served as Theranos’ chief operating officer. In court documents, Holmes' attorneys have asserted she was manipulated by Balwani through “intimate partner abuse" — an issue that is expected to come up during her ongoing testimony next week.

Until she took the stand Friday, Holmes had sat bolt upright in her chair to the far right of the jury through the trial, impassive even when one-time supporters testified to their misgivings about Theranos.

That combination of compelling testimony and documentary evidence apparently proved effective at convincing Holmes to tell her side of the story to the jury of 10 men and four women (including two alternates) who will ultimately decide her fate. If convicted, Holmes -- now 37 and mother to a recently born son -- could be sentenced to up to 20 years in prison.

Shortly after 3 p.m., Holmes walked slowly to the stand before a rapt courtroom filled with spectators and jurors, all wearing masks.

Maskless behind a transparent barrier, Holmes recounted her early years as a student at Stanford University and her interest in disease detection. That culminated in her decision to drop out of school in 2003 at the age of 19 to found the startup that eventually became Theranos. Holmes said the name was derived from the words “therapy” and “diagnosis”.

Holmes said she convinced her parents to let her use her college savings to finance her ambitions to shake up the health care industry. “I started working all the time ... trying to meet people who could help me could build this,” Holmes said in a husky voice that became one of her trademarks during Theranos' rise.

As the company took shape, so did its vision. Ultimately Theranos developed a device it called the Edison that could allegedly scan for hundreds of health problems with a few drops of blood. Current tests generally each require a vial of blood, making it both slow and impractical to run more than a handful of patient tests at a time.

Had it worked as promised, the Edison could have revolutionized health care by making it easier and cheaper to scan for early signs of disease and other health issues. Instead, jurors heard recordings of Holmes boasting to investors about purported breakthroughs that later proved to be untrue.

Witness testimony and other evidence presented in the trial strongly suggested that Holmes misrepresented purported deals with major pharmaceutical firms such as Pfizer and the U.S. military while also concealing recurring problems with the Edison.

But the Edison problems didn't become public knowledge until The Wall Street Journal published the first in a series of explosive articles in October 2015. An audit by the Centers for Medicare and Medicaid Services confirmed those problems the following year.

By then, Holmes and Balwani had raised hundreds of millions of dollars from billionaire investors such as media mogul Rupert Murdoch and the Walton family of Walmart and struck deals with Walgreens and Safeway to conduct blood tests in their pharmacies. Those investments at one point valued Theranos at $9 billion, giving Holmes a $4.5 billion fortune — on paper — in 2014.

Evidence presented at trial also revealed that Holmes had distributed financial projections calling for privately held Theranos to generate $140 million in revenue in 2014 and $990 million in revenue in 2015 while also turning a profit. A copy of Theranos' 2015 tax return presented as part of the trial evidence showed the company had revenues of less than $500,000 that year while reporting accumulated losses of $585 million.

Ellen Kreitzberg, a Santa Clara University law professor who has been attending the trial, said she thought the government had made a strong case.

“There’s nothing sort of fancy or sexy about this testimony," she said. “The witnesses were very careful in their testimony. None of the witnesses seemed to harbor anger or a grudge against her. And so because of that, they were very powerful witnesses.”

Other witnesses called by the government included two former Theranos lab directors who repeatedly warned Holmes that the blood-testing technology was wildly unreliable. Prosecutors also questioned two part-time lab directors, including Balwani's dermatologist, who spent only a few hours scrutinizing Theranos' blood-testing technology during late 2014 and most of 2015. Holmes' lawyers noted that part-time lab directors were allowed under government regulations.

Other key witnesses included former employees of Pfizer, former Safeway CEO Steve Burd and a litany of Theranos investors, including a representative for the family investment firm of former education secretary Betsy DeVos. The DeVos family wound up investing $100 million.