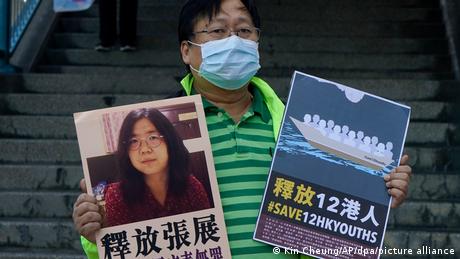 Detained journalist Zhang Zhan is reportedly on the "hanging by a thread" amid a hunger strike, as international pressure mounts on the Chinese government to release her.

Zhang was also unveiled as the recipient of the 2021 Press Freedom Award in the courage category, by Reporters Without Borders (RSF), on Thursday.

She was arrested in May 2020, after posting dozens of videos to YouTube about the pandemic situation in Wuhan. Zhang has been in government detention ever since, and last December, a Chinese court sentenced her to four years in prison under the charge of "picking quarrels and provoking trouble," a charge that's commonly used against journalists and activists in China.

In August, sources told DW that Zhang's weight had dropped below 40 kilograms (88 pounds) after she staged hunger strikes in prison for months. Last month, her brother Zhang Ju revealed on Twitter that she may be on the brink of dying in prison. "She is so stubborn. I think she may not live long. If she doesn't make it through the cold winter, I hope the world will remember her as she was," he wrote.

RSF Secretary-General Christophe Deloire also voiced his concerns. "For defying censorship and alerting the world to the reality of the nascent pandemic, the laureate in the courage category is now in prison and her state of health is extremely worrying," Deloire said.

In an interview with DW, Zhang Zhan's lawyer Zhang Keke said the journalist's mother last week had asked the Shanghai Women's Prison to release Zhang on medical parole again. At the time, authorities at the prison told her to submit the request in written form.

After expressing her intention to submit the materials as soon as possible, prison authorities said they were closed on weekends, so they asked Zhang's mother to return to the prison on November 15 to submit the information. However, more than 48 hours after she submitted the materials to the prison, there was still no update about her application.

According to an online application submitted by Zhang's brother to the authorities, when Zhang's mother last saw her through a video call on October 29, she was extremely weak and needed support to walk.

Life 'hanging by a thread'

"Her face and forehead were so bony and bloodless, and her life is hanging by a thread," he wrote in the appeal.

"Zhang Zhan's current physical condition prevents her from walking alone, and she can barely walk the distance of a few meters without support. My mother was so distraught at the news that she knelt down on both knees in front of the prison staff, hoping they would give her some humane care," he added.

An activist who has been following Zhang's case for more than a year, and prefers to remain anonymous due to fear of government retribution, told DW that while Zhang's health conditions are very concerning, it's difficult to know whether the Chinese government would consider releasing her on medical parole.

"According to similar precedents, it is rare for political prisoners to be released on medical parole, so if they can be released, they are probably very sick and beyond help," the source said.

"Zhang Zhan was so determined to go on a hunger strike that she did not take care of her own life."

Yaqiu Wang, the senior China researcher at Human Rights Watch, said there have been several instances in the past in which Chinese dissidents, including Nobel Peace Prize laureate Liu Xiaobo, either died in prison or died shortly after being released.

"The reason why they died shortly after being released is that they didn't receive enough medical attention in prison," Wang told DW. "Zhang's case is not the only example."

The journalist's lawyer Zhang Keke said her brother and mother were very distressed by the official accusations, but that they are also against Zhang's ongoing hunger strike.

"They have been hoping that the authorities will let her live," Zhang Keke told DW.

The lawyer added that he believes that Zhang's brother started speaking out on Twitter because he sees no hope for his sister to survive, and he doesn't want to feel guilty about her situation.

"If she is perishing in the prison and he does nothing about it, he won't be able to stand that," Zhang Keke explained. "That's why he went to Twitter to share his feelings about his sister."

Calls for an 'unconditional' release

"The Chinese government needs to be held to account for allowing yet another peaceful critic to fall gravely ill while unjustly imprisoned," HRW's Yaqiu Wang said.

"Governments should call for Zhang Zhan's urgent release to prevent an already-terrible situation from becoming a tragic one."

The US and Germany have also expressed concerns about her condition. US State Department spokesperson Ned Price said Washington was worried about her well-being.

"We reiterate our call to the PRC for her immediate and unconditional release, and for Beijing to respect a free press and the right of people to express themselves freely."

The German Foreign Ministry confirmed this week that the German Embassy in China has made a request to the Chinese Foreign Ministry, demanding the immediate release of Zhang. Some activists say support from the international community will help the family in their fight for her release.

"Her family believes that her health has reached an irreversible stage, so they have gathered the courage to fight for Zhang's right to medical parole," said Jane Wang, an activist based in London who has been campaigning for Zhang's release since her initial arrest.

"The outside world should not be silent this time. If there was no outside attention, what would Zhang be like now?"

Sources who have long followed the development of her case told DW that the Chinese government should handle her "wisely," as there have been cases of detainees who have died in Chinese prisons.

"Since her case is receiving so much attention, there may still be a breakthrough," said one source who prefers to remain anonymous, out of fear for their safety. "Some people are hopeful and others still think they can't have any hope in such a system, but I think we should be hopeful."

Yaqiu Wang believes that Zhang's efforts can still inspire people, despite a common belief that it's not useful to speak out under the rule of an authoritarian regime. "I think Zhang's inspiration is at the spiritual level," she said. "Maybe in the future, when there is room for people to voice their demands in Chinese society, they will think of her and think she is brave."