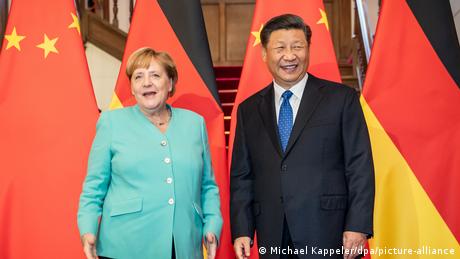 Outgoing German Chancellor Angela Merkel said Wednesday that despite tension with China, it is important for German and European research and development to cooperate with Chinese institutions.

In an interview with Reuters news agency, Merkel said that despite concerns about Chinese espionage at German institutions and technology theft, China remains an important contributor to science and industry.

"We can learn a lot from each other. Total decoupling wouldn't be right in my view, it would be damaging for us," she said.

"Chinese scientists are, after all, also part of the international publication system, and they, too, have to be evaluated," said Merkel, who holds a doctorate in quantum chemistry.

As Merkel prepares to leave the Chancellery, a rivalry continues to grow between China and the West over critical technology such as 5G networks and semiconductors.

In early November, EU and US officials held the first meeting of the EU-US Trade and Technology Council (TTC), dubbed a rekindling of transatlantic ties under President Joe Biden to deal multilaterally with technology issues, secure semiconductor supplies and counter China's dominance.

Merkel admitted that Germany has had to rethink some of its partnerships, as China's clout has grown in recent years.

"Maybe initially we were rather too naive in our approach to some cooperation partnerships," Merkel told Reuters, adding that they were now more circumspect. "These days we look more closely, and rightly so."

Merkel said that standards should remain high when it came to protection of critical infrastructure and mentioned Germany's new IT security law.

The IT Security Act 2.0 gives the government greater power to vet producers of equipment for next-generation telecommunications networks, like China's Huawei.

However, Merkel said that individual companies should "not be excluded from the outset."

Merkel said that Germany is in continuous discussions with Beijing on matters relating to intellectual property and patents,"both with regard to Chinese students in Germany and German enterprises operating in China."

However, she added the West needs to keep up on innovation.

"At the moment, that is not the case in Europe in fields such as quantum computers and artificial intelligence," she said. "China and in many areas the US are better."