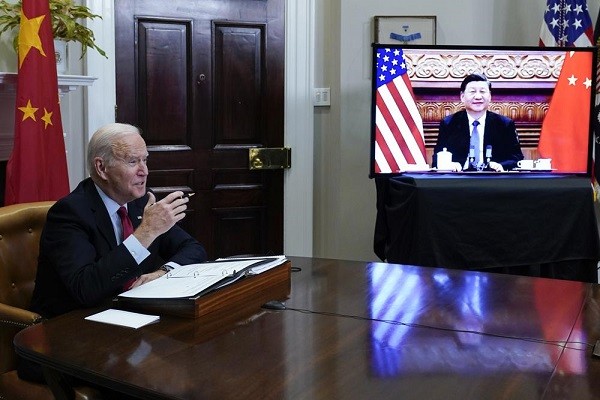 Winston Churchill famously said, "To Jaw-Jaw is better than to War-War." While this is certainly true, he never promised that talking would necessarily be productive. This was clearly the case with the Nov. 16 virtual meeting between U.S. President Joe Biden and People's Republic of China ruler-for-life Xi Jinping (習近平).

Both leaders entered the meeting beset by problems.

President Biden has been bolstered by the recent passage of an unprecedented and badly needed infrastructure bill, real if still insufficient progress vaccinating against COVID-19, job growth, and an overall improvement in relations with U.S. allies. At the same time, he continues to suffer from high disapproval ratings, high inflation, a badly divided body politic, a pugnacious Putin, and a continually threatening China.

Chairman Xi is also plagued by difficulties: a huge debt burden, an energy supply problem, a property industry — representing 25% of the economy — in deep trouble, a looming demographic crisis, and increasing international resistance to Beijing’s belligerence. But whatever political divisions there may be in the PRC, they are hidden from the Chinese public, and on Nov. 11 the Chinese Communist Party (CCP) passed a resolution indicating that, like Mao and Deng before him, Xi will remain in power until he dies.

But Xi had the advantage

In my view, Xi entered the meeting with a decided advantage. He had nothing to lose and Biden had little to gain. And so it was.

Over the course of the U.S.' relationship with the PRC, however, it is difficult to find examples of American diplomatic successes, whether on nonproliferation, trade, human rights, climate change, COVID-19, cybersecurity, IPR theft, the South China Sea, North Korea, Iran, or relations with the PRC itself.

The only arguments for Biden’s meeting with Xi can be reduced to diplomatic platitudes rather than the possibility of concrete success: keeping open lines of communication, talking with the leader of a major country to ensure there are no misunderstandings, needing to express our desire for cooperation where common ground may be possible, and so on.

No surprises, but the PRC claimed a win

It is therefore no surprise that in the reported three-and-a-half-hour virtual meeting (allowing for interpretation, 105 minutes on each side), there were no surprises, no new positions, and nothing was achieved.

Most of the winning points, at least according to PRC media, seemed to go to Xi: telling Biden support for Taiwan independence was “like playing with fire” and that “those who play with fire will get burned.” Isn’t this how an adult would speak to a child?

In case there was any doubt what Xi meant, he also warned that China was prepared to take “decisive measures” if Taiwan made any moves toward independence that crossed Beijing’s red lines. There was nothing new about such threats but spoken in person to the U.S. president, I find them inappropriately high-handed.

Biden could have done better

President Biden erred again in stating that the U.S. remained committed to the “one China policy” and recognized only one sovereign Chinese state.

More accurately, President Biden should have said the U.S. continued to abide by its “one-China policy” and acknowledged the PRC position that there is but one China. He might also have correctly and forthrightly added that, as the PRC knew, the U.S. has never recognized PRC sovereignty over Taiwan.

President Biden’s subsequent clarification on Nov. 17 of the position he had taken with Xi was not helpful: "I said that they have to decide — Taiwan, not us. We are not encouraging independence." He said, “We made very clear we support the Taiwan Act, and that's it," adding that Taiwan "makes its own decisions."

But the Taiwan Relations Act (as well as other key documents) more than once makes it clear that the nature of Taiwan’s future and how it is achieved is not a matter of indifference to the U.S.:

To his credit, President Biden did say, according to the White House statement on the meeting, that Washington “strongly opposes unilateral efforts to change the status quo or undermine peace and stability across the Taiwan Strait,” but this is a policy that would also prohibit a Taiwan declaration of independence. Biden helpfully added, however, that U.S. policy toward Taiwan was “also guided by the Taiwan Relations Act, the Three Joint Communiqués, and the Six Assurances.”

Ironically, Biden’s mention of the Joint Communiqués was not necessarily unhelpful given that the PRC contributed passages in these communiqués that it would now gag on. For example, in the first communiqué (Feb. 28, 1972), the PRC described in detail the very kind of hegemon or “big nation” it would become:

“The Chinese side stated: Wherever there is oppression, there is resistance. Countries want independence, nations want liberation and the people want revolution — this has become the irresistible trend of history. All nations, big or small, should be equal: big nations should not bully the small and strong nations should not bully the weak. China will never be a superpower and it opposes hegemony and power politics of any kind. The Chinese side stated that it firmly supports the struggles of all the oppressed people and nations for freedom and liberation and that the people of all countries have the right to choose their social systems according their own wishes and the right to safeguard the independence, sovereignty and territorial integrity of their own countries and oppose foreign aggression, interference, control and subversion.”

Despite the lack of progress on any specific issues, media reported that the overall tone of the Biden-Xi meeting was “cordial,” said Xi had called Biden an “old friend,” and quoted PRC outlets saying that the talk had been “frank, constructive, substantive and fruitful.”

According to the Chinese read-out, as reported by The Economist, Biden also offered some kind words, hailed China’s 5,000 (sic) years of history, declared that his administration does not seek to change China’s system of government, and stressed that as America strengthens its global alliances, the aim is not to oppose China.

But no results, as expected

Nonetheless, there were no substantive results. As reported in the Guardian, a U.S. official said after the meeting:

“We weren’t expecting a breakthrough. There were none to report... This was really about developing ways to manage competition responsibly, ensuring that as we go forward, the United States and China have a steady state of affairs where we take a series of competitive actions, but we’re able to keep open lines of communication. We work with our allies and partners and we confront China where we need to, and at the same time that we are able to work together where our interests intersect.”

So, it appears that while nothing was achieved, there was likely no great damage either. Nonetheless, it gave Xi Jinping the opportunity he wanted to portray the meeting as a great victory. Such meetings in themselves unhelpfully reinforce Xi’s sense of his own importance as well as the PRC’s belief that it now leads the world and will before long dominate it.

Isn’t it about time that the United States recognizes that talking to the authoritarian ruler of China or his minions will not lead to positive changes?

William A. Stanton is currently a Chair Professor at National ChengChi University, where he teaches at the International College of Innovation. He previously served (2019 -2021) as a vice president of National Yang Ming University and then as a senior vice president of National Yang-Ming Chiao-Tung University. From Aug. 2017 to July 2019, Professor Stanton taught at the Center for General Education at National Taiwan University. He previously worked for four years as the George K.C. Yeh Distinguished Chair Professor and founding director of the Center for Asia Policy at National Tsing Hua University (NTHU). From Oct. 2014 through Jan. 2016, he was also NTHU’s senior vice president for Global Affairs. Prior to his academic career, Dr. Stanton served for 34 years as a U.S. diplomat. His final posting was as director of the American Institute in Taiwan (2009-2012).
US-China relationsJoe BidenXi jinpingPCRTRABiden-Xi summitTaiwan Relations Act
Tweet