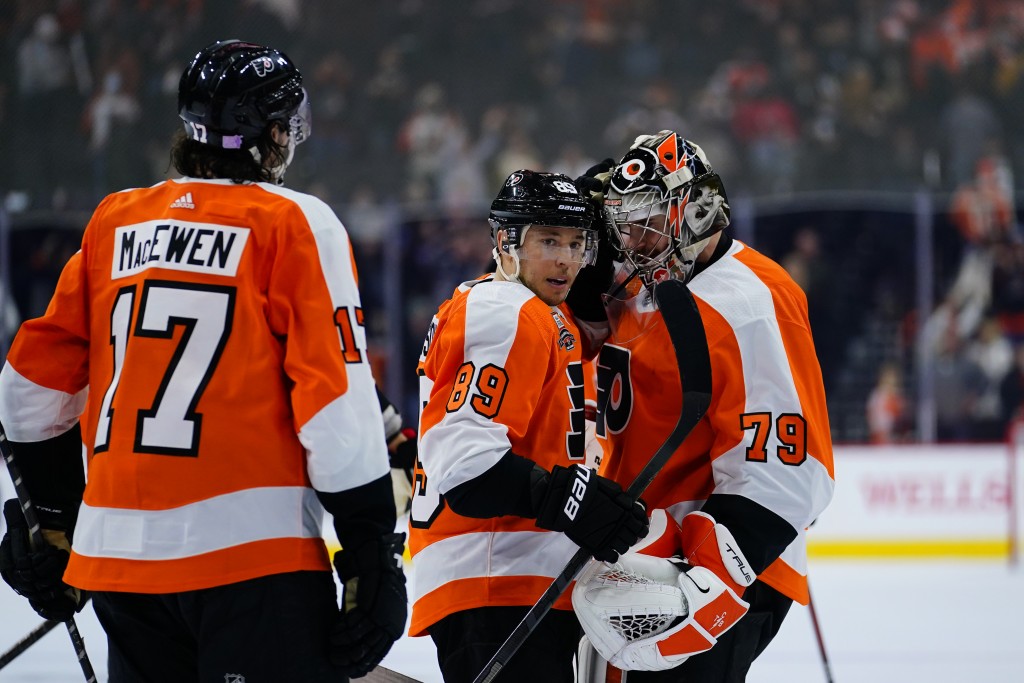 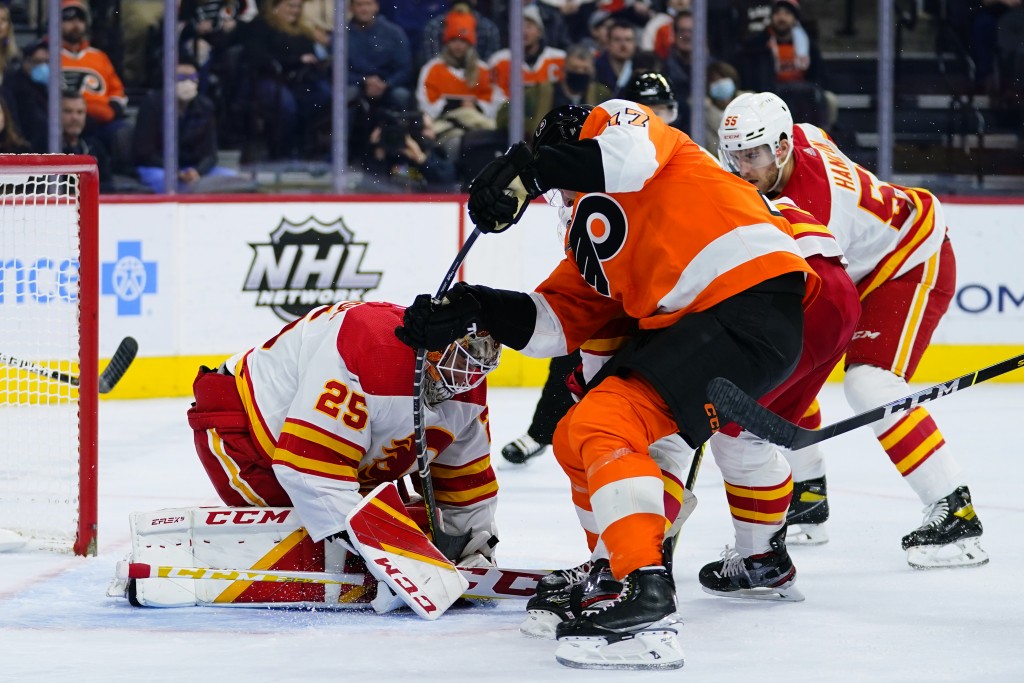 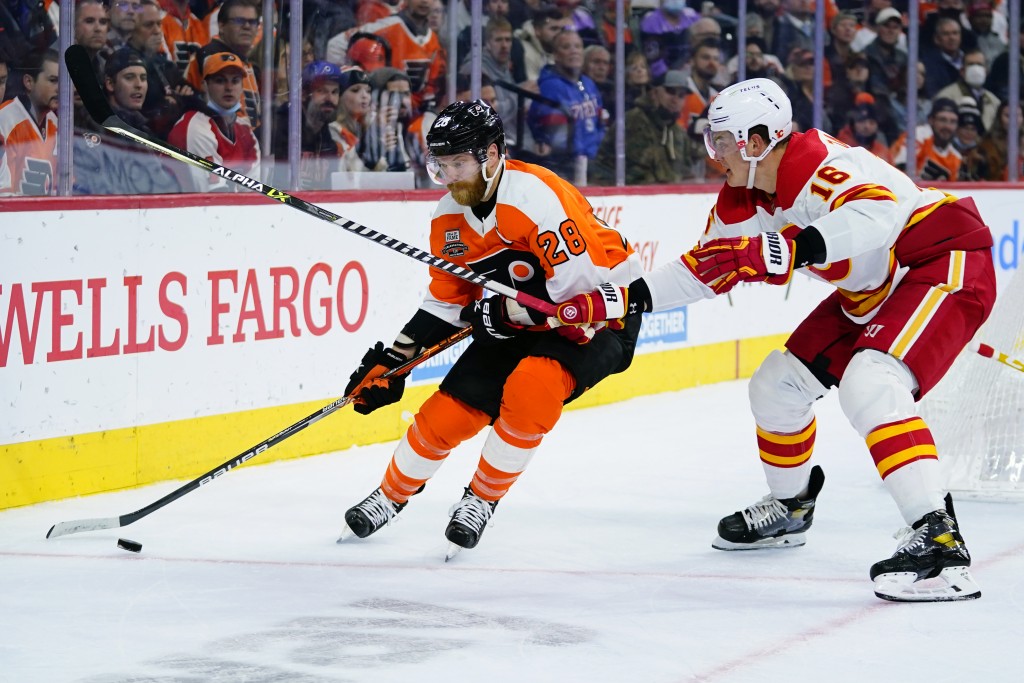 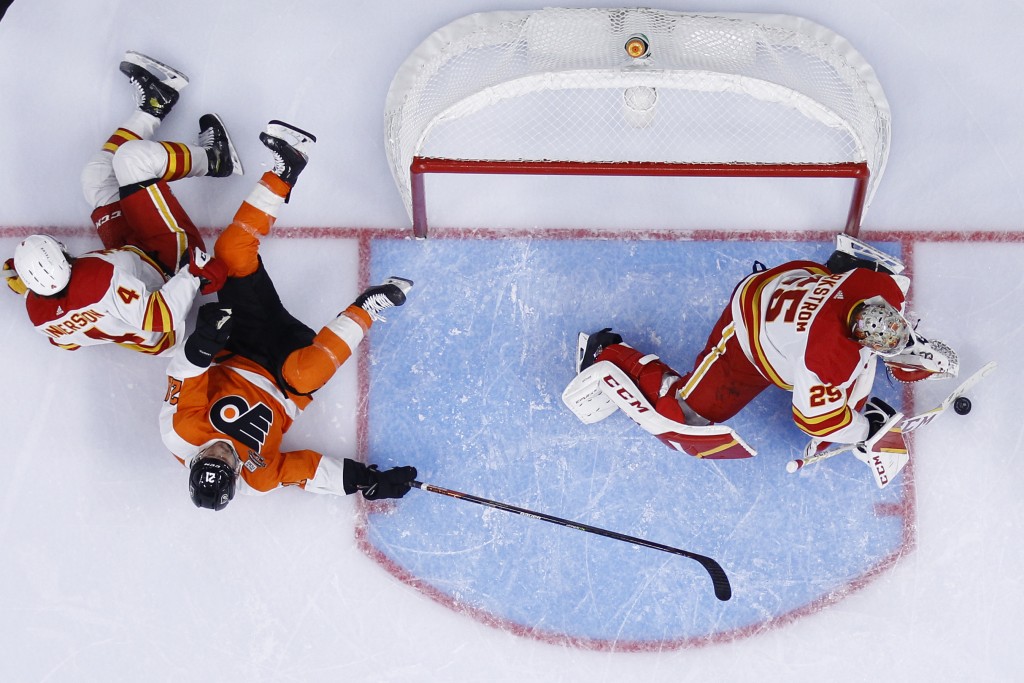 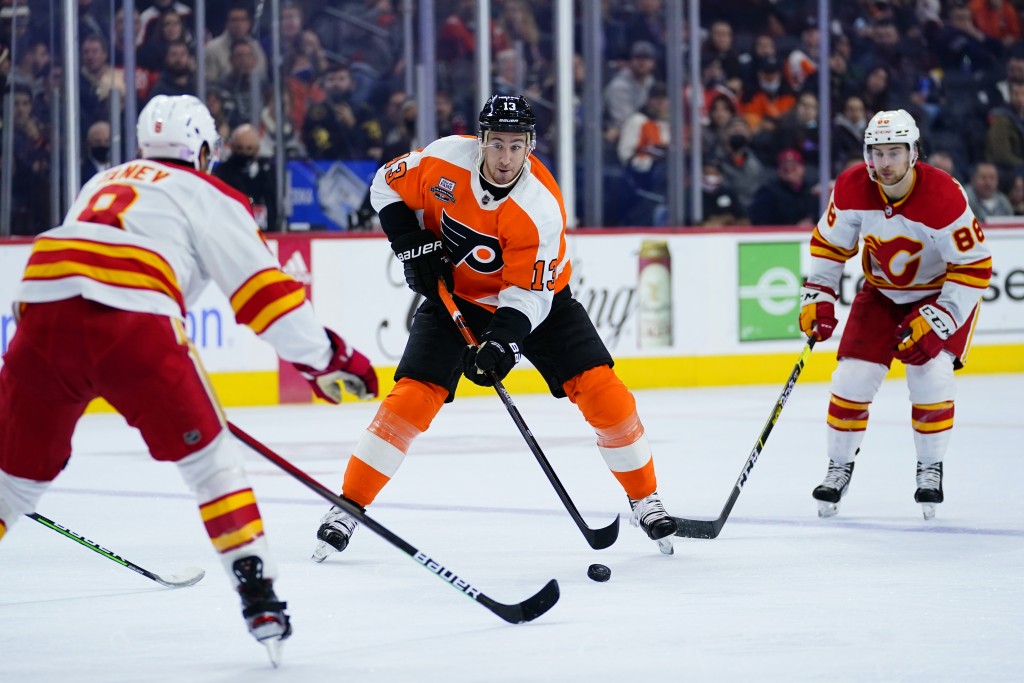 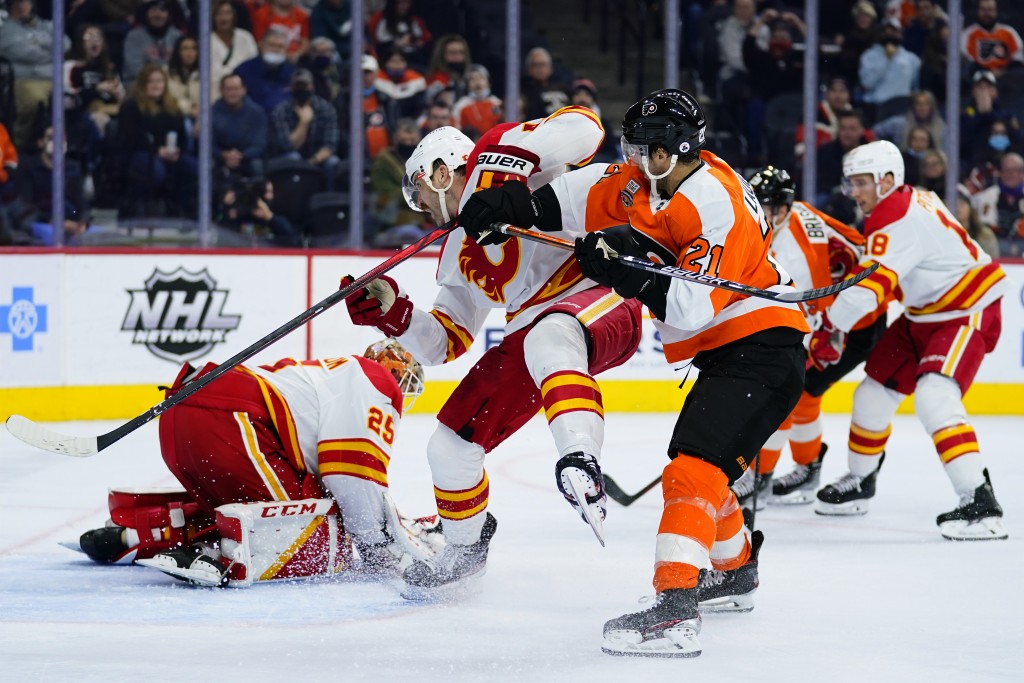 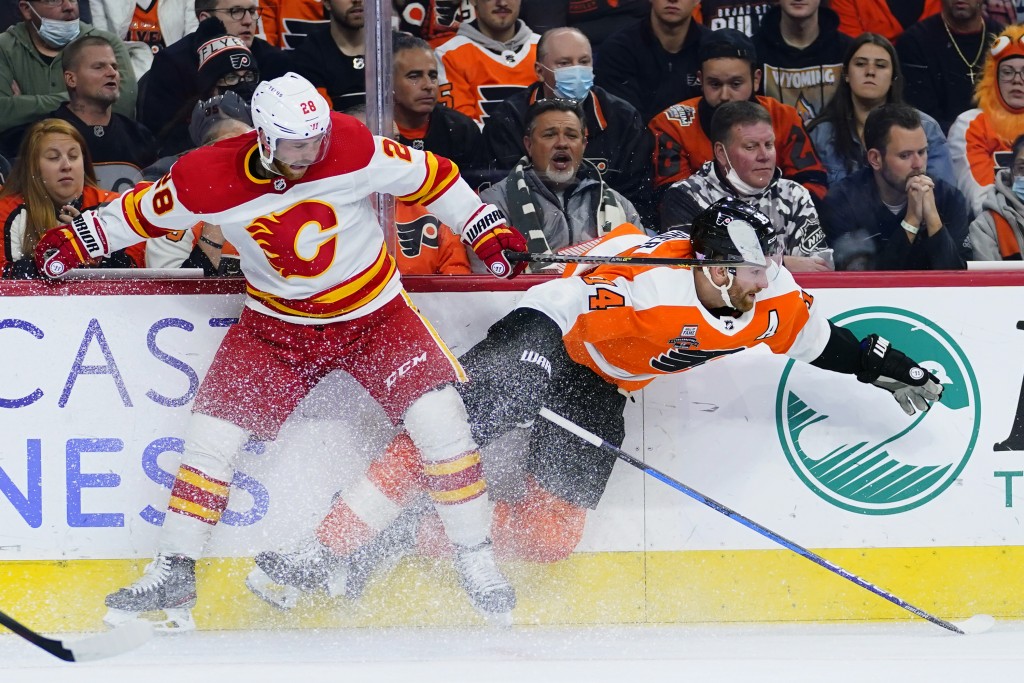 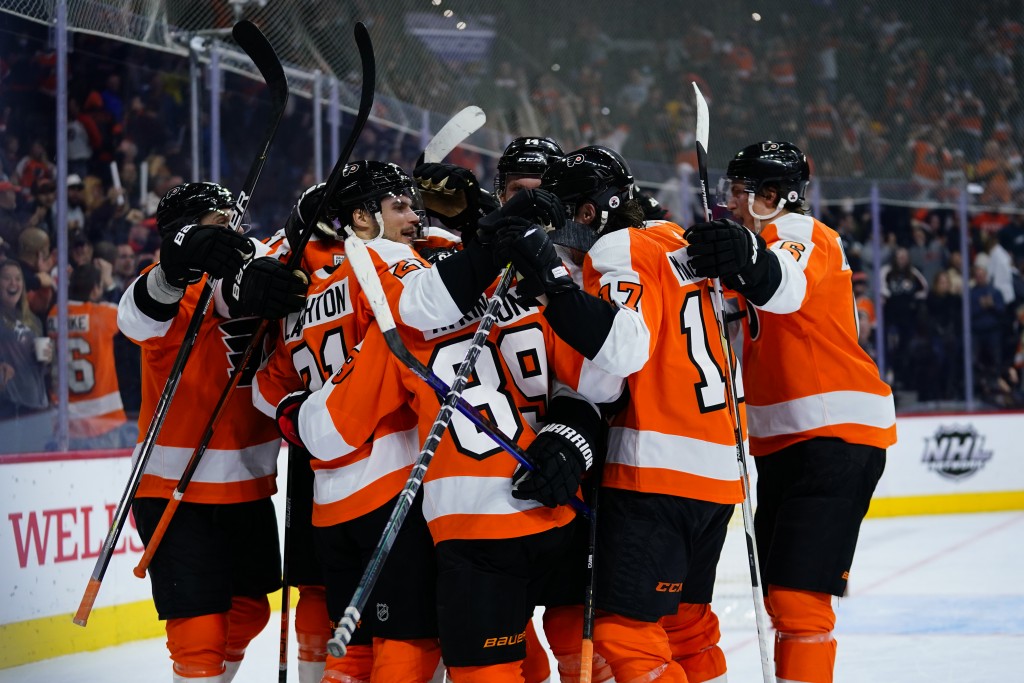 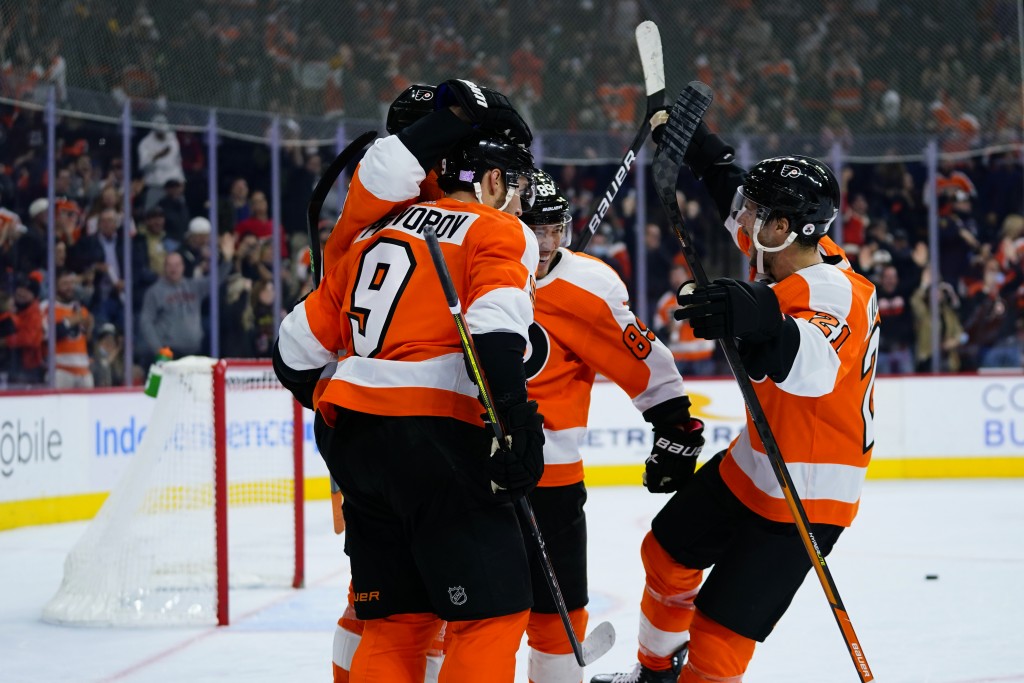 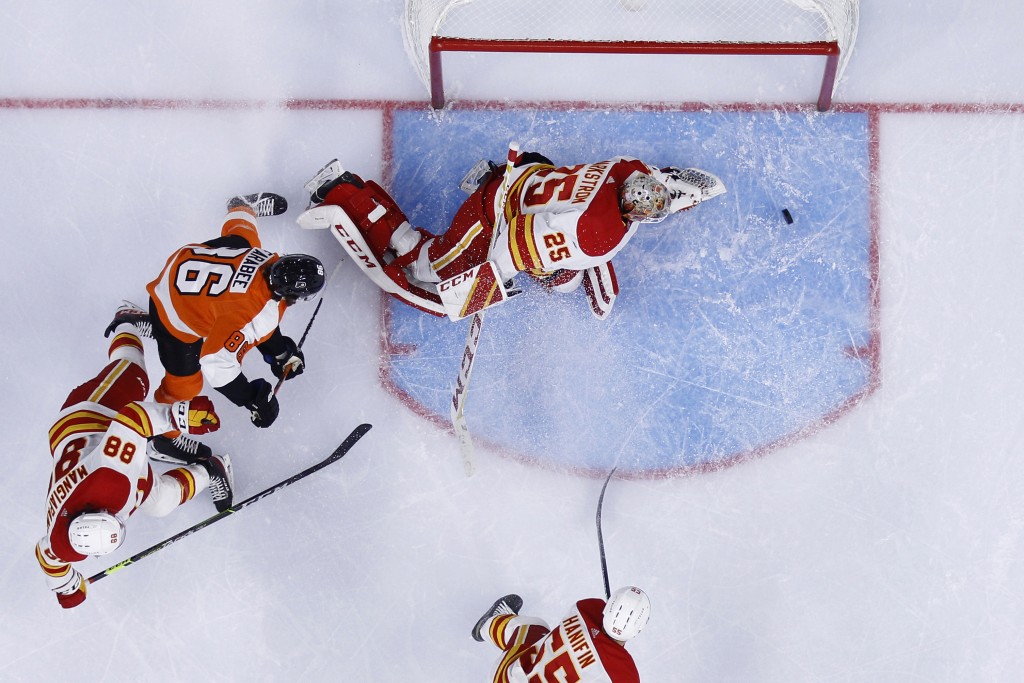 PHILADELPHIA (AP) — Cam Atkinson scored 45 seconds into overtime and Carter Hart made 33 saves to lift the Philadelphia Flyers to a 2-1 victory over the Calgary Flames on Tuesday night.

Oliver Kylington scored for the Flames, who have lost six of eight. Jacob Markström had 41 saves in Calgary’s fourth game of a seven-game trip.

After Johnny Gaudreau turned the puck over in the 3-on-3 overtime, Sean Couturier took a shot on a 2-on-1 with Atkinson. Markström made the pad stop on Couturier, but the rebound bounced right to Atkinson on the far side and he deposited the puck for his team-leading seventh goal.

“(Couturier) made a good play,” Atkinson said. “My face lit up pretty good when it came to me. All I had to do was bury it.”

Hayes’ first goal of the season tied the game 14:27 in the second period. His initial shot deflected off Calgary’s Rasmus Andersson and right back to him. Hayes then fired the puck into the near side past Markström, who was out of position after the deflection.

Hayes played in just his second game of the season after sitting out the first 12 contests due to a lower body injury. It also was the first goal since the passing of his brother Jimmy over the summer, and Hayes pointed skyward after scoring and then to his heart.

“I’m happy it happened sooner rather than later,” Hayes said. “It was a big goal. It’ll be one I’ll remember forever.”

He said he’ll give the puck to Jimmy’s 2-year-old son, Beau.

“Personally, really, really happy for him,” said Gaudreau, who played with Hayes at Boston College. “He’s gone through a lot these past few months. It’s hard because he’s on the other team and I don’t want them to score, but I was happy for him. He deserved it.”

Kylington opened the scoring with just under 10 minutes left in the first with his third of the season. Gaudreau banked a pass off the boards to Kylington, whose shot from the point deflected off the legs of Couturier and past the right pad of Hart.

It was the 336th assist for Gaudreau, who tied Guy Chouinard and Paul Reinhart for sixth in Flames history. It also was his eighth point in six career games in Philadelphia, which is 30 minutes from where he grew up in Carneys Point, New Jersey.

Gaudreau registered a career-high 10 shots and played a strong game, but wasn’t able to put one home in front of family and friends in attendance.

“When you have that many good looks, you have to find the net,” he said.

Gaudreau said he was "excited to play in front of a lot of people that supported me for so long. I’m not going to waste their time when they come out to watch me and have a bad game. Just tried to work hard and do my thing on the ice.”

The Flyers inducted Paul Holmgren and Rick Tocchet into the club’s hall of fame in a pregame ceremony. Holmgren had 138 goals and 171 assists in 500 games as a player from 1975-84. He also served the club as an assistant coach, head coach, general manager and president. Tocchet is Philadelphia’s all-time leader in penalty minutes with 1,815. He also had 232 goals and 276 assists in 621 games.

Flames: C Tyler Pitlick returned after missing a game due to a lower body injury. … C Elias Lindholm appeared to get hit in the foot on a shot in the third period. Lindholm doubled over in pain on the bench but didn’t miss a shift. “It was tough, but it’s just a puck,” he said.

Flyers: D Ryan Ellis (lower body) was placed on injured reserve. He had missed nine consecutive games before returning in Saturday’s 5-2 loss at Dallas, where he was injured again. … C Patrick Brown didn’t return after his final shift of the first period. He jammed his thumb and will be evaluated further on Wednesday, coach Alain Vigneualt said.

Flames: At Buffalo on Thursday.