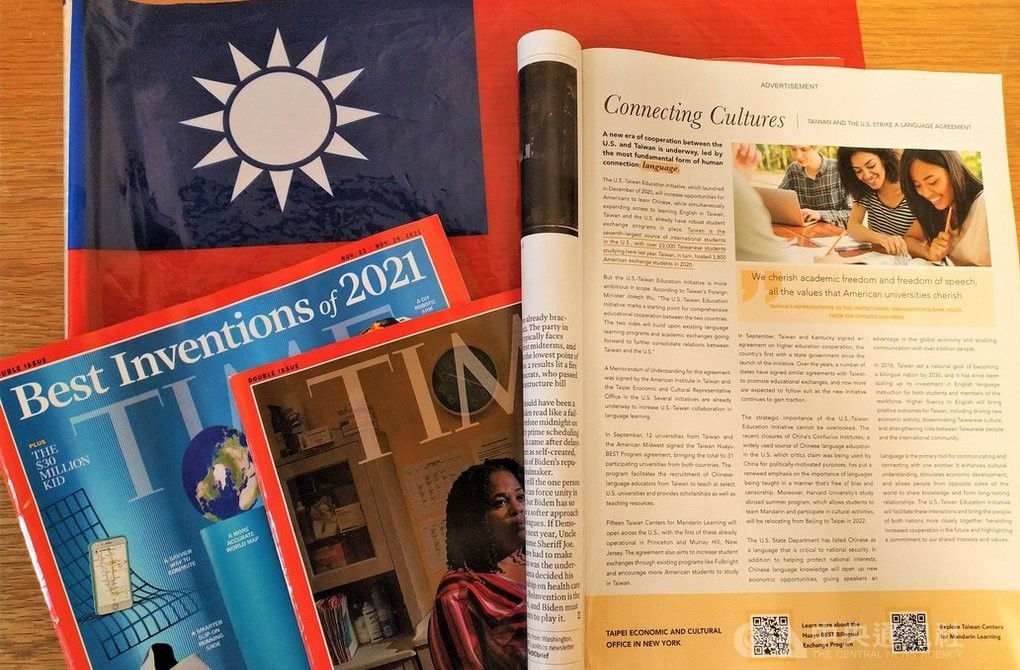 TAIPEI (Taiwan News) — A full-page advertisement promoting the fruits of the U.S.-Taiwan Education Initiative launched last December has been published in the latest issue of Time Magazine.

The ad stated that Taiwan is actively expanding extant Mandarin and English language education cooperation programs, such as the Ministry of Education’s (MOE) Excellent Mandarin Language Program. The purpose of these efforts is to encourage the U.S. to cooperate more with Taiwanese colleges and universities, CNA reported.

Under the Mandarin program, the MOE will send 36 teachers from 10 Taiwanese universities to teach in the U.S. and invite 168 American students to Taiwan for Mandarin studies. Additionally, the ministry has set up a subsidy program for Mandarin teachers abroad, providing them US$1,200 (NT$33,333) per month for living expenses as well as additional expenses locally indexed to cover airfare and teaching materials.

In late September, Taiwan signed memoranda of cooperation with a total of 12 universities in the American Midwest regarding Mandarin language studies, CNA cited the ad as saying.

Meanwhile, Pennsylvania State University became the first public university in the eastern U.S. to cooperate with a Taiwanese university under the Excellent Mandarin Language Program after it signed a memorandum of cooperation with National Taiwan Normal University in early November.

The ad noted that China’s Confucius Institutes have been criticized as political tools and a number of them have recently been shuttered in the U.S. This has made the American public pay more attention to ensuring political neutrality in language studies and ensure students and schools alike are not subject to censorship, per CNA.

The relocation of Harvard University’s Harvard Beijing Academy summer study abroad program from China to Taiwan is an example of growing concerns about China’s reach in educational institutions abroad.

James K.J. Lee (李光章), head of Taiwan’s New York representative office, said that Taiwan’s free and open learning environment is its own advantage and asset, according to CNA. “As a reliable partner of the U.S., the East Asian nation has the ability to play an important role in Mandarin language education in the U.S.,” he said.

Lee said that the Taiwan Government will increase cooperation opportunities with local U.S. state governments and major universities, share Taiwan’s high-quality Mandarin language teaching resources, and enable the U.S. to better appreciate Taiwan’s democratic experience and the value of freedom, according to CNA.