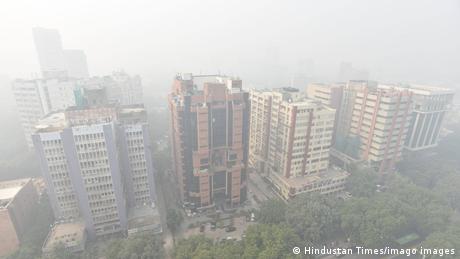 New Delhi authorities on Saturday said schools in the Indian capital would be closed for a week as a Supreme Court judge suggested imposing a pollution lockdown.

"Schools will be shut so that children don't have to breathe polluted air," Delhi Chief Minister Arvind Kejriwal said. The schools had only just reopened after a COVID-19 lockdown.

The decision came as many students stayed at home over the past week as air quality worsened and the coronavirus continued to pose a threat.

How serious is the pollution?

Delhi, considered one of the world's most polluted capital cities, is recording dangerous levels of pollutants in the atmosphere.

The Indian capital is being hit by factory and vehicle emissions as well as smoke from agricultural fires and dust from building sites.

The latest wave of pollution was exacerbated by families burning the remains of last year's crop before the winter. The launching of thousands of fireworks to celebrate the Indian festival of lights, Diwali, has further deepened the problem.

"After COVID, pollution has emerged a major threat for public health particularly for children and senior citizens," Ashok Agarwal, national president of the All India Parents' Association, said earlier in the week.

The Central Pollution Control Board said that "low winds with calm conditions during the night" would continue until November 18, causing headaches and breathing problems.

"We are getting 12-14 patients daily in the emergency, mostly at night, when the symptoms cause disturbed sleep and panic," Dr Suranjit Chatterjee from Apollo Hospitals told the Times of India newspaper.

What is a pollution lockdown?

On Saturday, a Supreme Court judge spoke of imposing a lockdown on the city of New Delhi to help alleviate the air quality issues on residents.

"How will we live otherwise?" Chief Justice N.V. Ramana asked.

Delhi's chief minister said his government would consider the court's suggestion after discussing the possibility with major stakeholders in the city.

"Pollution lockdown has never happened before. It will be an extreme step," Kejriwal said.

He said that construction activity would be halted for four days to cut down on dust.

Authorities asked public and private workers to work from home if possible.

India reports over a million deaths from air pollution every year.