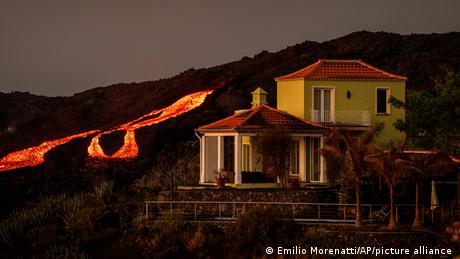 After 20 years in La Palma, Leonardo Rodriguez is packing his bags and preparing to bid goodbye to his home. It won't be easy. Together with his partner and their two cats, the chef plans to start a new life at the end of the month on the Spanish mainland in Granada.

Rodriguez has already been promised a job there. The pizzeria in Jedey, where he'd been working so far, has been shuttered for weeks. It's located directly at the foot of the Cumbre Vieja volcano. The house he had rented is also there.

But Rodriguez can no longer go there, since authorities have evacuated the area within a 6-kilometer (3.7-mile) radius and access is forbidden. The lava is too close.

"I've spoken to my boss. She's officially closing the place down at the beginning of December,” Rodriguez says. "The volcano just won't stop; today there were very violent eruptions again. A colleague and I now have to give up our jobs," he adds, with evident tension in his voice.

Forced to make a fresh start

Rodriguez and his girlfriend were planning to buy a house in La Palma. They had certainly not planned on starting a new life from scratch.

But the volcano, which erupted on September 19, has changed everything. It has destroyed more than 1,500 buildings, and that has had a ripple effect on the real-estate market. Like many local residents, called "Palmeros," Leonardo Rodriguez has had no luck finding a place.

More and more islanders are now leaving, Rodriguez says, adding that even his sister has moved to Tenerife. There is hardly any work or accommodation, he says, and many do not want to continue to depend on state handouts, as he himself does right now. He says he still hasn't received a short-term work allowance promised by the government.

"Tomorrow I have an appointment with the Red Cross. They're handing out a kind of credit card that you can use to buy gas, or groceries at the supermarket. Everything except alcohol, clothes and tobacco," Rodriguez explains. "It has about €150 to €200 ($170-$230) on it, so that's something at least."

The Spanish government had pledged over €250 million to help the island's inhabitants and finance new houses, infrastructure and compensation payments for businesses. But the funds have been slow to arrive.

So far, the regional government has been able to invest only a fraction of the promised money, for example, in housing for evacuees or to provide them with psychological support. Some funds have also gone into setting up new irrigation systems for some banana plantations that are cut off from the water supply.

However, many of the island's residents complain that they have received hardly any of the financial aid so far because its distribution has been excessively bureaucratic.

Oliver Martín normally works in the tourism industry. These days, however, he helps many of those affected by the volcano. He shovels volcanic ash and offers the use of his car for errands. He knows people who have had to present their documents to the authorities several times, yet are still waiting for state aid.Martin says some of them don't even have a euro for a coffee in their regular bar.

Donations by Spanish aid organizations are definitely helping, he says. But in his view, La Palma has changed virtually overnight.

"You can see the pain and despair on the faces of many people on the street. People are sad, although here in La Palma, we have always seen ourselves as a happy people,” Martin said.

The volcanic eruption has also affected Martin. His daughter Violeta, who died in 2018, is buried in a cemetery in Tazacorte. One of the lava flows is located just half a kilometer away from her final resting place. The family has been allowed to visit the grave just a few times in recent weeks. The thought that their daughter could be trapped under the lava forever almost breaks his heart.

"It would be like losing her a second time,” he said. Now, he and others whose relatives are buried in the cemetery are calling for the graves to be moved. But that's difficult because under current law that is only allowed at least five years after the burial. Martín would need a special permit. But that could take too long: He's concerned that the lava flow near the cemetery could become stronger or change direction at any time.

"We are very worried. And feel helpless. But one thing is certain. If a decision is not made in time, and the lava buries the cemetery, I will go there and rescue my daughter myself,” Martin said.

The volcano dictates the lives of the residents of La Palma on all levels and around the clock. Leonardo Rodríguez looks anxiously at his cellphone as he receives messages from acquaintances near Jedey, at the foot of the volcano. The volcano is rumbling again, "just like before the last big eruption," Rodriguez says.

The tensions surrounding the longest volcanic eruption in the history of La Palma show no signs of letting up.