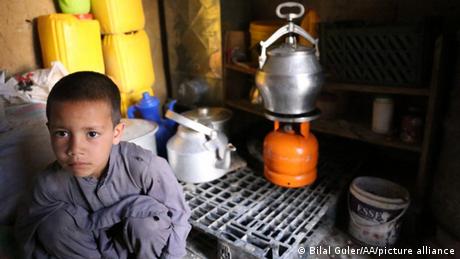 More than half the population of Afghanistan will face high levels of "acute food insecurity" from November to March, according to a recent report from the United Nation's Food and Agriculture Organization (FAO) and the World Food Program (WFP).

The report said the acute food insecurity is expected to last through the post-harvest "lean season," during which harsh winter weather threatens to "cut off areas of the country where families desperately depend on humanitarian assistance to survive the freezing winter months."

According to the FAO and WFP, 23 million Afghans — including 3.2 million children under the age of 5 — are currently suffering from hunger. They urgently need food, drinking water, medical care and proper shelter in winter.

"Afghanistan is now among the world's worst humanitarian crises [...] and food security has all but collapsed," said David Beasley, WFP executive director.

"This winter, millions of Afghans will be forced to choose between migration and starvation unless we can step up our life-saving assistance, and unless the economy can be resuscitated," Beasly said in a press release.

"Hardly anyone has money in Afghanistan right now," Hamidullah Khadem, head of the Chamber of Industry in Herat province, told DW.

"In the industrial area of Herat alone, 70% of the companies have gone out of business. There is no demand. Purchasing power has shrunk extremely. Civil servants and employees in the public sector hardly get paid," he added.

This winter would have likely been difficult for Afghans with or without the Taliban having seized power in August.

In 2021, Afghanistan experienced its second drought in four years, which has had a severe impact on agriculture and livestock.

On its own, this would have been enough to trigger a humanitarian emergency. The Taliban's return to power and the resulting flight, displacement and withdrawal of foreign aid agencies has only exacerbated the situation.

Smaller businesses such as silk manufacturers or brickworks currently have little chance of survival. The number of unemployed people in Afghanistan is increasing daily — and with it the number of those who can no longer afford food.

"Many of my acquaintances and friends are selling their furniture and kitchen appliances, like their refrigerator, to be able to buy something to eat," said a female activist who asked not to be named. "Those who can leave the country are making their way out."

The security situation in Afghanistan under the Taliban has deteriorated along with the economy. There are ever more reports of kidnapping and hostage-taking of businessmen and others with money.

Kabul-based economic expert Khanjan Alokozay told DW that in the last two months, more than 40 shopkeepers and businessmen were kidnapped in different parts of the country, and that some of them were also killed.

The Taliban know that many Afghans want to take their money and belongings and flee Afghanistan. To prevent this, Afghans are currently only allowed to withdraw the equivalent of $200 (€175) per week.

An economy dependent on foreign aid

Afghanistan's economy will shrink by up to 30% this year, according to the International Monetary Fund (IMF).

Afghanistan's GDP in 2020 was only around $20 billion. And according to the World Bank, 43% of that was based on aid money from abroad. Before the Taliban takeover, 75% of public spending came from foreign aid grants.

That foreign funding was stopped after the Taliban came to power in August. In addition, most of Afghanistan's foreign currency reserves abroad were frozen.

Although the UN said it secured €1 billion in humanitarian aid pledges for Afghanistan to prevent a crisis, donors still face challenges in making sure the funding is channeled through legitimate aid agencies on the ground so it actually reaches those in need.

Germany is among the donors, providing €600 million in humanitarian assistance, €90 million of which is going to the WFP.

However, the WFP said in a press release that current funding is a "drop in the ocean" to meet the food and nutrition needs in Afghanistan. To meet the task at hand, the WFP said it may require as much as $220 million per month.

And international donors continue to be wary that aid money will end up in the Taliban's coffers. Some argue that providing aid necessitates engaging with the Taliban, thus legitimizing it on some level.

The World Bank recently said it does not expect to continue direct development aid payments to Afghanistan, as there is no way to ensure where the money will end up since the economy has collapsed.

Growing poppies instead of wheat

"To fight against our problems, we need access to our frozen assets abroad, and also the possibility to participate in the international payment system," Mohammad Younis Mohmand, the head of Afghanistan's trade and investment chamber, told DW.

Mohmand said that the Taliban would then be able to prevent the collapse of the economy and alleviate the suffering of the people.

The Taliban could plan an emergency program to reduce the number of unemployed people and address hunger in the country.

Taliban government spokesman Zabiullah Mujahid announced that thousands of unemployed people would participate in a "work for wheat" scheme. Participants would for example dig out canals and basins during the winter to mitigate future droughts.

However, it is unclear where the Taliban will get the wheat. The ousted government had announced in July that the drought means Afghanistan would have to import one-third of its annual wheat requirements.

Wheat is a staple food in Afghanistan. However, many Afghan farmers prefer to grow poppies for more lucrative opium production.

The drug trade has become one of Afghanistan's largest economic sectors. Three of the past four years have each seen record levels of opium production in Afghanistan, according to the United Nations Office on Drugs and Crime (UNODC).

Even as the coronavirus pandemic raged last year, poppy cultivation in Afghanistan increased by 37%, the UNODC reported.