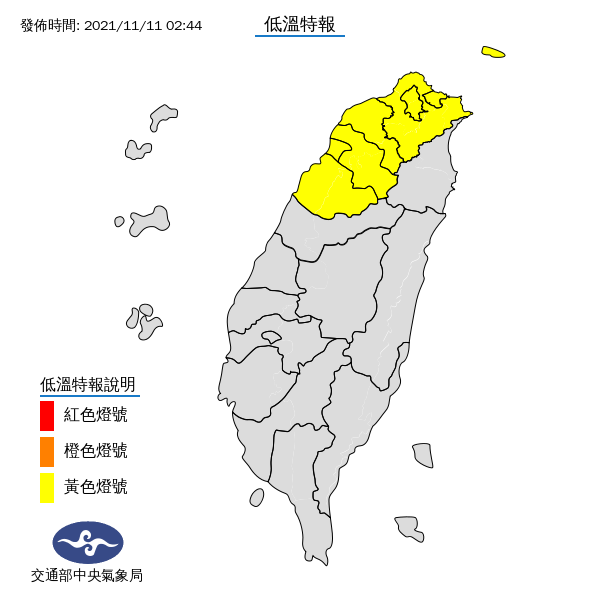 The weather bureau issued the alert for the cities of Keelung, Taipei, New Taipei, Taoyuan, and Hsinchu as well as Hsinchu and Miaoli counties. As of 8 a.m. Thursday morning, a low temperature of 6.6 degrees was reported in Miaoli County's Zaoqiao Township and a low of 6.8 degrees in Emei Township, Hsinchu County.

According to the CWB, a northeastern monsoon and radiative cooling have caused temperatures to drop in the past few days, dipping to their lowest point early Thursday morning. Reporter Hsu Chung-i (徐仲毅) said this monsoon will persist until Saturday (Nov. 13), and residents of northern Taiwan and Yilan and Hualien counties should dress warmly.

Temperatures may still fall to between 17 and 19 degrees from Thursday evening to Friday (Nov. 12) morning and 15-16 degrees in some northern areas, while the south will see temperature drops of up to 10 degrees, reported the CWB.

CNA cited weather expert Wu Der-rong (吳德榮) as saying that this is the earliest a continental air mass has arrived in the country in the fall since 1982. However, the air mass will weaken Friday through Sunday (Nov. 14), and temperatures will rise again. Wu also predicted some rain in east Taiwan and generally cool to cold mornings and evenings.

The CWB said the northeastern monsoon will grow stronger from Nov. 18-20, bringing temperatures down again in the north and northeast.