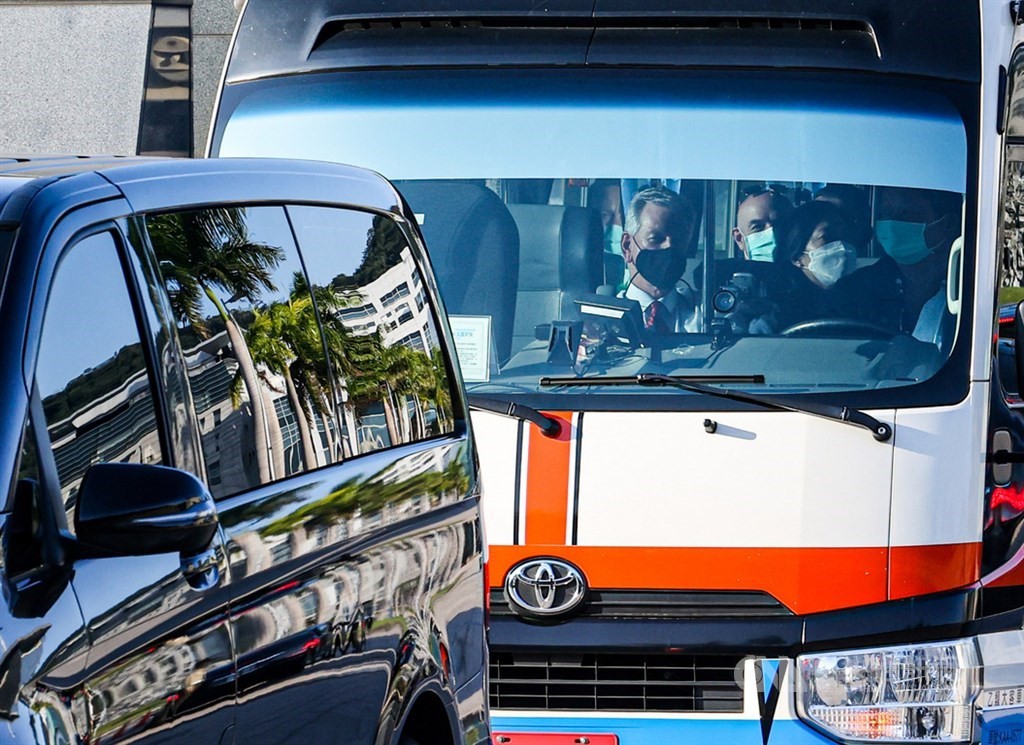 TAIPEI (Taiwan News) — A delegation of U.S. lawmakers on a low-key surprise visit to Taiwan were seen visiting the Ministry of National Defense (MND) on Wednesday (Nov. 10).

The senators and representatives, who arrived unannounced on Tuesday (Nov. 9), were seen being transported to MND headquarters in Taipei's Dazhi area at 2:30 p.m. The congressmen were seen leaving the building after spending one hour there, reported CNA.

Earlier that morning, the delegation reportedly met with President Tsai Ing-wen (蔡英文). However, the Office of the President did not provide any statements about the visit.

According to local media reports, the congressmen were briefed by MND officials on recent actions taken by China's People's Liberation Army (PLA) to intimidate Taiwan. Defense ministry officials have not provided any details to the media about the delegation's visit. Shu Hsiao-huang (舒孝煌), an analyst at the Institute for National Defense and Security Research (INDSR), was cited by CNA as saying that the congressmen's visit is in response to the stepped-up harassment of Taiwan by PLA forces. Shu said that in addition to obtaining first-hand information about the situation in the region, they may also have hoped to obtain "insights that are different from the information provided by the United States Indo-Pacific Command."

The delegation may also want to ascertain how U.S. arms sales can enhance Taiwan's defense capabilities and what kind of weaponry Taiwan needs. Su Tzu-yun (蘇紫雲), a senior analyst at INDSR, suggested that the legislators are on a confidential "fact-finding mission."

International relations scholar Chang Kuo-cheng (張國城) believes that the delegation came to exchange information about China's military activities and understand the extent to which the PLA is a threat to Taiwan. Kuo observed that the visit to the MND comes amid increasing concerns by U.S. officials about the situation in the Taiwan Strait. The South China Morning Post on Tuesday cited two sources as confirming that Senators John Cornyn (R-TX) and Tommy Tuberville (R-AL) were among the visitors. One of the paper's sources said that Senators Mike Crapo (R-ID) and Mike Lee (UT) and Representative Jake Ellzey (R-TX) were also participating, while the sixth lawmaker has yet to be identified.

The presence of Cornyn and Crapo is notable because they were among a group of senators who introduced the Taiwan Deterrence Act last week. The bill would conditionally provide US$2 billion (NT$55.82 billion) a year in foreign military financing for Taiwan.

Cornyn, along with Senator Tammy Duckworth (D-IL), also introduced the Taiwan Partnership Act, which calls for the development of a partnership program between the U.S. National Guard and Taiwan. It also would seek to increase exchanges between senior defense and general officers of the U.S. and Taiwan with the goals of enhancing interoperability, strengthening Taiwan's reserve forces, and expanding humanitarian and disaster relief cooperation.