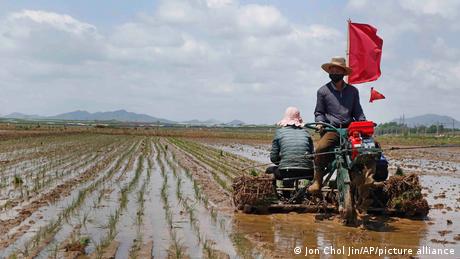 The last of the harvest was gathered shortly before the first snow fell in North Korea this year, but the yield was significantly less than the amount needed to feed the isolated nation's 26 million people.

This June, a report issued by the South Korea-based Korea Development Institute estimated that the North gathered just over 4.4 million tons of crops last year, down more than 240,000 tons on the previous year's harvest.

The think tank reported that North Korea requires a harvest of 5.7 million tons a year to feed its people.

Aid agencies and experts are warning that there is already widespread hunger across the North, and some are cautioning that the nation is on the brink of a repeat of the widespread starvation that was experienced in the mid-1990s.

The four-year famine is known euphemistically as the "Arduous March."

As many as 3 million North Koreans are believed to have died as a result of chronic economic mismanagement, the collapse of the food distribution system and other countries halting aid supplies.

A quarter of a century later, the situation is once again bleak, albeit for different reasons.

Leader Kim Jong Un ordered that North Korea's borders be completely sealed in February 2020 in an effort to prevent the coronavirus from entering the country.

Pyongyang continues to insist that there have been no cases of the virus within its borders, which remain sealed.

For nearly two years, there have been no imports of desperately needed food, medicines or other daily necessities, along with fertilizers required for farmers' fields.

Before its staff were ordered to leave the North in the summer of 2020, the World Food Program (WFP) estimated that 10.3 million residents, more than 40% of the population, were already experiencing malnutrition.

Choi Ji-young, a research fellow and economist with the Korea Institute for National Reunification in Seoul, said that closing the border with China has been the largest factor in the North's present supply problem.

Pyongyang has traditionally relied on China for imports of key items, such as food, medicine and fuel.

"We estimate that cereal production decreased by 5% last year and that has affected food supply conditions this year," she told DW.

"We have also observed increases in cereal prices in the North this year, while there has also been volatility in rice prices," she added.

"That has been particularly notable in the border regions, while the increasing price of corn to rice is another sign of food shortages."

In late October, Tomas Ojea Quintana, the United Nations' Special Rapporteur on human rights in North Korea, told reporters in New York that the hunger crisis in the North is worsening and that children, the elderly and those in prisons or labor camps are at particular risk of starvation.

Imesh Pokharel, head of the UN Office of the High Commissioner for Human Rights in Seoul, said obtaining an accurate picture of the food situation in the North is notoriously difficult.

However, defectors who have fled to the South are able to offer some insights, especially those who are able to remain in contact with their families there via mobile phone.

"The borders have been closed for nearly two years and we are hearing that the resilience of the people is declining," Pokharel told DW.

"Many no longer have goods or property to sell in order to obtain food and we are hearing reports of people struggling and food distress in parts of the country."

"The bottom line is that a large proportion of the country does not have enough food and there are deep concerns within this organization about the situation there," he said.

As well as speaking with defectors, Pokharel's office follows the reports of media that specialize in North Korean issues and employ networks of under-cover "citizen reporters" who also communicate with the outside world via smuggled mobile phones.

Many of their reports make harrowing reading, such as farmers being sent to disciplinary labor camps for failing to hand over 60% of their crops to the state simply because yields have fallen this year and there is insufficient leftover to feed their own families.

City residents mobilized to help bring in the harvest are reportedly being strip searched at the end of the working day to make sure they are not trying to steal any of the crop.

People who have resorted to picking wild plants in the mountains have been taken ill after consuming plants that are not fit for human consumption, while many people are too weak through a lack of food to go to their assigned jobs.

There were reports last winter of entire families who had been forced to sell their homes to buy food and then dying of exposure in towns across the country.

Some experts fear that there will be more deaths this winter, which has started earlier than usual and may be colder than in average years.

However, researcher Choi believes Kim will be able to avoid another "Arduous March" and once again stave off a complete collapse of society, which would inevitably threaten the survival of his own regime.

"There are obviously some serious food shortages, but the food supply situation today is more favorable than it was compared to the mid-1990s," she said.

"There are also reports that the North may be close to reopening its border with China and resuming trade. And if North Korea did face another Arduous March situation, then I expect that China would come to their assistance."

For now, the people of North Korea will be hoping the border does reopen, that trains carrying the food they so desperately need start rolling again and that the winter is not as harsh as feared. And then they must hope that next year's harvest is better.