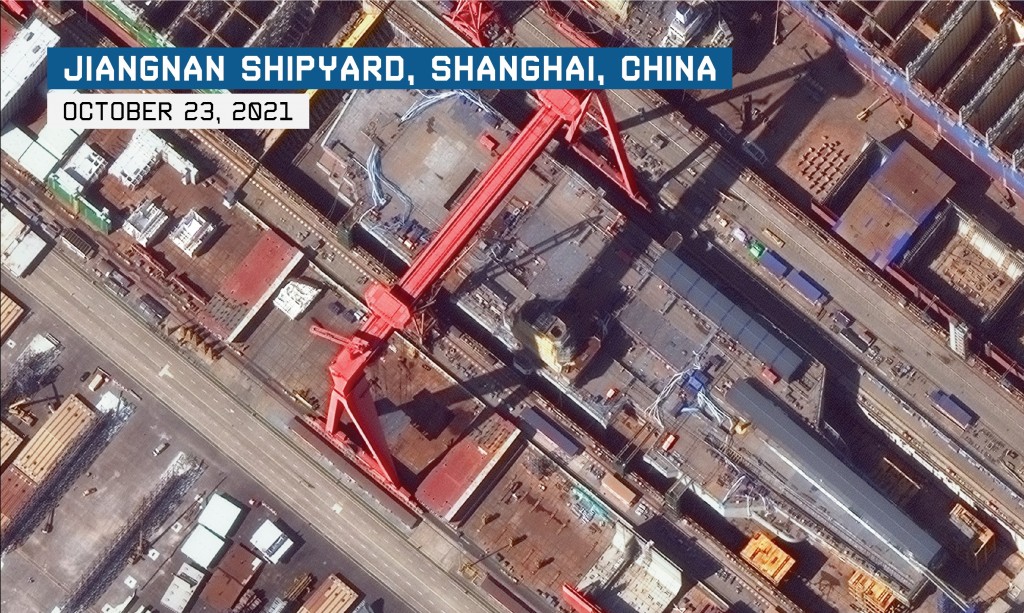 TAIPEI (Taiwan News) — China’s newest aircraft carrier, which is outfitted with technology almost on par with American carriers, could be launched as soon as February next year.

A Center for Strategic and International Studies (CSIS) report published on Tuesday (Nov. 9) says the Type 003 carrier is nearing completion in the Jiangnan shipyard in Shanghai. "Based on available information and observed progress at Jiangnan, the authors estimate the Type 003 will launch in roughly three to six months," CSIS said.

Satellite images included in the report show installation of several “major internal components” to be nearly complete, including aircraft catapults.

Matthew Funaiole, senior fellow at the CSIS' China Project, described the Type 003 as China’s "first foray into a modern aircraft carrier," according to CNN.

"They've really committed to building out a carrier program, and they continue to push the boundaries of what they're able to do," he said. China wants to “signal to the world that it has a world-class navy (and) try to convince nations around the region or around the world that it is on par with the United States," CNN quoted him as saying.

The Type 003 is likely outfitted with catapult systems similar to ones used by the U.S. Navy, Funaiole said, adding that there could also be electromagnetic launchers on the ship.

With this advanced system, China could field a variety of aircraft at sea, including airborne early-warning and control craft, tankers, and electronic-jamming planes, he said. China’s current carriers, the Liaoning and the Shandong, are equipped with the ski-jump type of launching system, which limits aircraft fuel capacity and weapons payloads.

Despite all this impressive technology, the Type 003 likely still runs on conventional steam propulsion, which Funaiole said limits its operational range.

The U.S. has been conducting carrier operations for generations, while China has only had a carrier since 2012, and that experience gap is not "something that you can just jump forward," CNN cited Funaiole as saying.

Alessio Patalano, a professor of war studies at London’s King's College, said China lacks experience in fielding the perfect number of support vessels required in a carrier strike group, per CNN. Additionally, "Very few nations possess carriers, and even fewer possess carriers that can maintain a high operational tempo, under any weather condition, night and day," he noted.