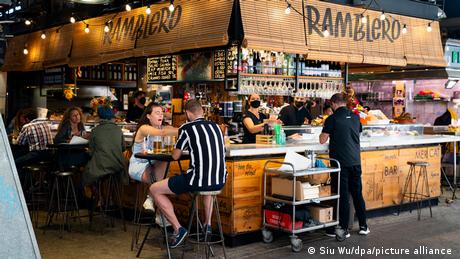 For the first time during the coronavirus pandemic, Germany's nationwide seven-day incidence rate has crossed the 200 threshold. On Monday, it stood at 201.1. The rate, which indicates the number of new COVID-19 infections diagnosed per 100,000 people over a seven-day period, had previously peaked at 197.6 in December 2020.

In other words: The fourth wave has crashed on Germany's shores. The same is true for many other countries. In the northern hemisphere, colder weather has arrived, winter is almost here and COVID cases and hospitalizations are climbing swiftly again.

The situation is not the same everywhere, though. In Israel, for example, the incidence rate stood at 74.3 on Monday. The country was the first that started offering a third shot of the BioNTech-Pfizer COVID vaccine to residents aged 60 and older who were vaccinated at least five months earlier back in July.

A study published in the New England Journal of Medicine found that Israelis who had received booster shots were much less likely to test positive for COVID-19 or to develop severe symptoms than were those who have had only two jabs.

DW looked at the countries with the lowest seven-day incidences in the European Union. Data come from the German portal Corona in Zahlen, which updates country pages daily and aggregates numbers from Johns Hopkins University and Our World in Data, a nonprofit run by researchers from Oxford University and the Global Change Data Lab.

Spain boasts the lowest seven-day incidence rate in Europe, at 31, and a population that is over 80% fully vaccinated. It's important to note that this goes for young people, as well: 30.1% of under-18-year-olds in Spain have had at least one shot, according to the European Centre for Disease Prevention and Control (ECDC). That's the second-highest rate in the EU. Considering that outbreaks among youth are one factor in driving up infections, the fact that almost one-third of Spain's youth are vaccinated is likely part of the explanation for why the country is able to keep its COVID-19 case numbers down.

Spain experienced its fourth wave in the spring, although on a smaller scale than the previous three. In April, Fernando Simon, the director of the Spanish Health Ministry’s Coordination Centre for Health Alerts and Emergencies, said at a press conference that it "it does not appear that this fourth wave is going to be of a very large scale or come close to what we saw in the second and third." For now, the country is successful at staving off a fifth wave.

In the small island nation of Malta, the incidence rate stands at 48.8, the second-lowest in the European Union, and 83.5% of the population is fully vaccinated — the second-highest rate. With no direct neighbors, it is easier for Malta to isolate itself. In July, authorities began requiring unvaccinated visitors had to quarantine upon arrival. At that point, the country only recognized immunization certificates from the EU, the UK and Switzerland.

Today, Malta also waives quarantine requirements for travelers who have vaccination certificates from several other countries ― if they have proof of a booster shot with one of the vaccines recognized by the European Medicines Agency.

Sweden's seven-day incidence of 54.9, the third-lowest in the European Union, is interesting for several reasons. Its immediate neighbors Norway and Denmark have incidences of 175.2 and 263.3, respectively, and yet Swedenhas managed to keep its number down. With 68.2% of the population fully vaccinated, the country just barely beats the EU average of 65.6%.

Authorities introduced strict rules during the second wave that might have made a difference, like a ban on alcohol sales after 8 p.m. and capacity limits on stores. But. by that point, Sweden, which had kept restaurants and most schools open when deaths first surged in early 2020, had already paid a hefty price. As of late October, more than 15,000 people in Sweden have died from COVID-19, or about 145 people per 100,000 residents. That is triple Denmark’s death rate and almost 10 times Norway’s.

Portugal could be a case study to show that high vaccination rates don't always lead to spectacularly low case numbers. It is among the countries with the highest vaccination rates worldwide: almost 88%. It ranks first in the European Union for the vaccination rate among under-18-year-olds, as well: 32.5% have had at least one shot, according to the ECDC. Yet Portugal's seven-day incidence stands at just under 68, more than double that of its neighbor, Spain.

Considering that Portugal used to be one of the hot spots for transmission in Europe, however, that number can be considered a success. In February, Germany sent a team of military medics with equipment such as field hospital beds and ventilators to Portugal, where the health care system was completely overwhelmed. Today, Portugal's incident rate is significantly lower than Germany's.