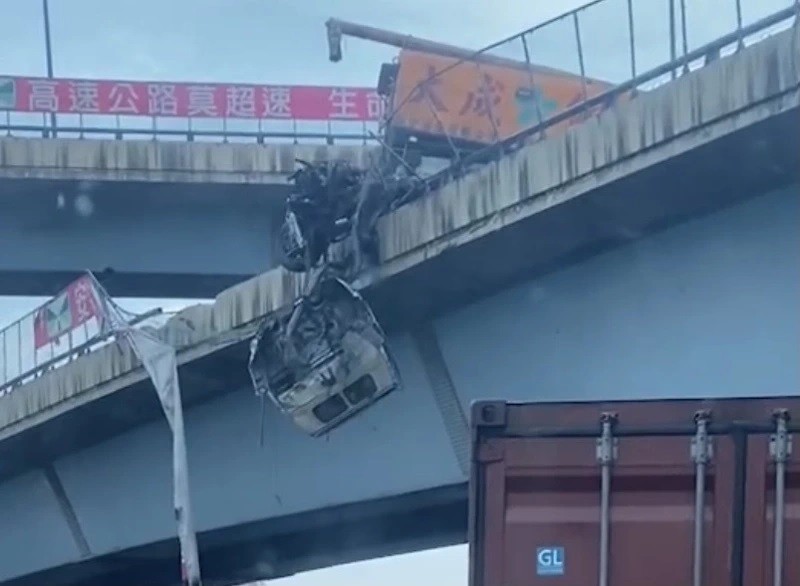 TAIPEI (Taiwan News) — A truck driver was rescued early Monday morning (Nov. 8) from his vehicle's cab as it dangled dangerously over the edge of an overpass.

The truck hurtled into it with so much force that it smashed through the barrier. The cab slid off the edge of the overpass, sending debris tumbling onto the highway below. The 42-year-old driver, surnamed Hsieh (謝), found himself in a precarious position, with little more than thin shreds of metal connecting the cargo compartments with the cabin, which was hanging in midair over the edge of the elevated highway ramp, reported the Liberty Times. The Changhua Fire Bureau dispatched six fire trucks, three ambulances, and 21 personnel to the scene.

Firefighters initially tried to reach Hsieh with a ladder truck but were unsuccessful. They then called for the assistance of a private crane operator, which was finally able to rescue him at 8:02 a.m, reported UDN. Hsieh was found to be conscious but had suffered multiple fractures, bruises, and abrasions. Paramedics rushed him to Changhua Christian Hospital for treatment.

The accident backed up traffic for more than 4 kilometers on the No. 1 and No. 3 national highways as multiple lanes were closed on both the overpass and the highway below. Traffic finally resumed on the highway below two and half hours after Hsieh had been rescued. Based on a preliminary investigation, the weather at the time of the accident was cloudy, and visibility and road conditions were poor. The cause of the crash is currently under investigation.