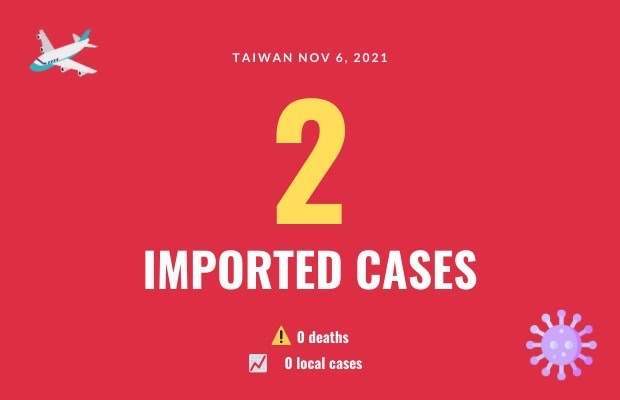 The two imported cases were a Taiwanese woman in her 30s who was diagnosed as a COVID patient in the United States in July. After returning to Taiwan, she tested negative several times until undergoing a new test on Nov. 5 in preparation for her next trip overseas.

The other new imported case was a male Indonesian teenager. A total of 29 contacts have been asked to quarantine, the CECC said.

Taiwan’s latest total of 16,438 coronavirus cases includes 14,590 domestic cases and 1,794 imported ones, with the total death tally remaining at 847. Of the fatalities, 835 were the result of local infections, with New Taipei City registering 412 deaths and Taipei City 320.

A total of 36 COVID cases originated from a journey last year by the Taiwan Navy’s "Goodwill Fleet," two were infected onboard a flight, one case was classified as unresolved, and 14 cases are under investigation. A total of 111 patients, including a woman from Indonesia who was first named as a COVID case on Friday (Nov. 5), have been removed from the list of confirmed cases.