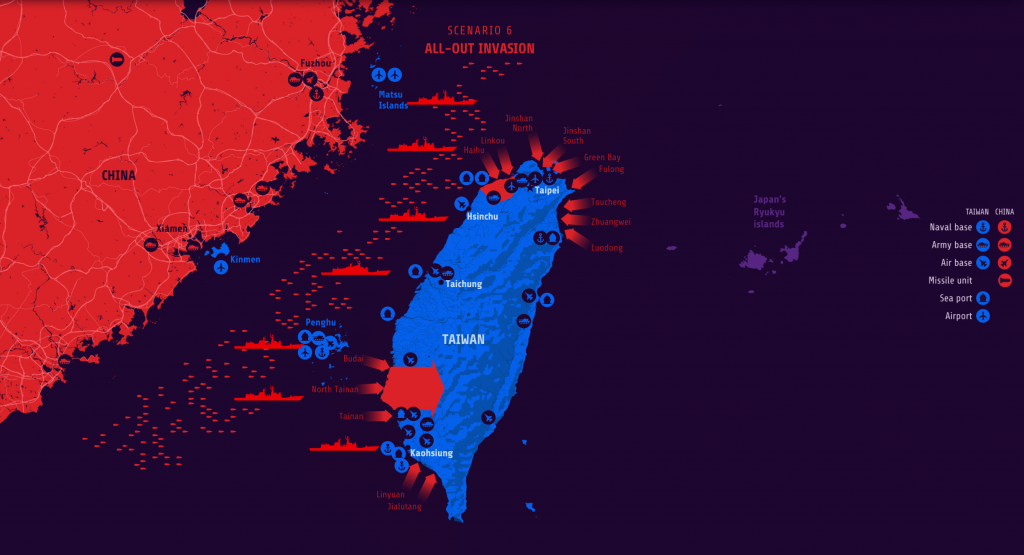 Seventy-two years ago, the Communist Party seized control of China after a bloody struggle. The defeated Nationalist government fled to Taiwan, frustrating Beijing's desire to capture the island. Since then, China has arisen as a superpower rivaling America; Taiwan has blossomed into a self-governing democracy and high-tech powerhouse with Washington's backing. Now, after decades of tenuous stalemate, there is a renewed risk of conflict. While it is impossible to know how this long rivalry will play out, in some respects the battle for Taiwan is already underway.

As Reuters reported in December, the Chinese military – the People’s Liberation Army – is waging so-called gray-zone warfare against Taiwan. This consists of an almost daily campaign of intimidating military exercises, patrols and surveillance that falls just short of armed conflict. Since that report, the campaign has intensified, with Beijing stepping up the number of warplanes it is sending into the airspace around Taiwan. China has also used sand dredgers to swarm Taiwan’s outlying islands.

Military strategists tell Reuters that the gray-zone strategy has the potential to grind down Taipei’s resistance – but also that it may fall short, or even backfire by strengthening the island’s resolve. They are also envisioning starker futures. While they can’t predict the future, military planners in China, Taiwan, the United States, Japan and Australia are nonetheless actively gaming out scenarios for how Beijing might try to seize the prized island, and how Taiwan and America, along with its allies, might move to stop it.

China has a range of tactics it might adopt, military experts say. They all carry risk for President Xi Jinping and his ruling Communist Party. They also pose different challenges for Taiwan and for the United States and its allies, principally Japan. Xi’s options include seizing Taiwan’s outlying islands, blockades or all-out invasion. Some Taiwanese military experts say Beijing's next step might be to seize the lightly defended and remote Pratas Islands in the north of the South China Sea. Any of these moves could spin out of control into war between China and America over Taiwan.

This report examines some of the conflict scenarios. It is based on interviews with close to a dozen military strategists and 15 current and former military officers from Taiwan, the United States, Australia and Japan. Some serving officers spoke to Reuters on condition of anonymity. The report also draws on articles in U.S., Chinese and Taiwanese military and professional journals and official publications. In places, we have provided links to published articles and documents that shed light on Chinese, Taiwanese and U.S. thinking.

These scenarios are, by their very nature, speculative. They are not predictions by Reuters of events to come. There is no certainty that real conflict would follow any of these trajectories. And hostilities may not erupt at all. But with tensions high, accident or miscalculation could become a catalyst for clashes at any time.

“For all sides the stakes are enormous,” said Ian Easton, a senior director of the Project 2049 Institute in Arlington, Virginia, and author of “The Chinese Invasion Threat,” a 2017 book which lays out the challenges the PLA faces in mounting an invasion and how Taiwan might respond. “A life and death game is underway, and none of the players have any way of knowing how it will end.”

A China foreign ministry spokesperson said the ministry would not comment on “hypothetical reports.” But the spokesperson added that the ruling party in Taiwan and ‘“Taiwan independence’ elements, in collusion with external forces, are constantly engaging in provocations by seeking ‘independence,’ which is the root cause of the current tense and turbulent situation in the Taiwan Strait.”

Today, under Xi Jinping, China is flashing impatience with Taiwan’s unwillingness to submit to Beijing’s rule. Xi says China’s aim is peaceful unification, but has pointedly refused to rule out the use of force.

Chinese control of Taiwan would dramatically reinforce the Communist Party’s prestige at home and eliminate the island as a viable model of a democratic alternative to authoritarian Party rule. It would also give China a foothold in the so-called first island chain, the line which runs through the string of islands from the Japanese archipelago to Taiwan, the Philippines and Borneo, which enclose China’s coastal seas.

For Beijing, success would translate into a commanding strategic position in Asia, undermining the security of Japan and South Korea, and allowing China to project power into the Western Pacific. But Beijing also has an incentive to be cautious: If America and its allies intervened against a takeover attempt, they could inflict heavy losses on an untested Chinese military that has not fired a shot in anger for decades. Defeat could weaken the Party’s hold on power.

For the American alliance, a Chinese takeover of Taiwan would be a devastating blow. At a stroke, the United States would lose its status as the pre-eminent power in Asia, according to most U.S. and regional military experts. If America were unwilling or unable to defend Taiwan, its network of allies in the Asia-Pacific – including Tokyo, Seoul and Canberra – would overnight be far more vulnerable to military and economic coercion from China. Some might switch allegiance to Beijing, analysts say. Some might seek nuclear weapons to boost their own security.

If America did opt to defend the island, though, there is no guarantee it would defeat an increasingly powerful PLA, according to current and former senior U.S. commanders. To counter China’s military rise, the United States is now rolling out new weapons and strategy in the Asia-Pacific.

There are indications America’s stance may be stiffening. Asked last month if the United States would come to Taiwan’s defense if China launched an attack, President Joe Biden appeared to depart from the long-held U.S. policy of “strategic ambiguity” when he replied: “Yes, we have a commitment to do that.”

Lieutenant Colonel Martin Meiners, a spokesperson for the Pentagon, had no comment on “specific operations, engagements, or training” described in this report. But Meiners said that China had “stepped up efforts to intimidate and pressure Taiwan and other allies,” and this increases “the risk of miscalculation.”

For Japan, blocking China from gaining a foothold in its trade routes is vital. From Taiwan, the Chinese military could threaten Japan’s southern islands and dominate the sea lanes that carry its imports and exports. Top Japanese officials now publicly acknowledge Tokyo must assist the United States in defending Taiwan. Asked about the conflict scenarios, Japan’s defense ministry said it couldn’t comment “on hypothetical questions or speculation.”

In Taiwan, an overwhelming majority of the island’s 23.5 million people think of themselves as Taiwanese rather than Chinese and support closer economic and political ties with the United States, according to opinion polls and recent election outcomes. This sentiment has hardened as they watch Beijing’s ongoing crackdown in Hong Kong. President Tsai Ing-wen has repeatedly said Taiwan will defend its freedom and democratic way of life.

Taiwan’s defense ministry said in a statement that the island’s military had “drawn up relevant countermeasures and made various combat plans” regarding possible actions and attempts to invade Taiwan by the “Communist army.”

Xi has made one thing clear: Taiwan, he has said, “must be, will be” unified with China to realize his dream of a rejuvenated China, a nation that recaptures the position it held for centuries as a great Asian power. 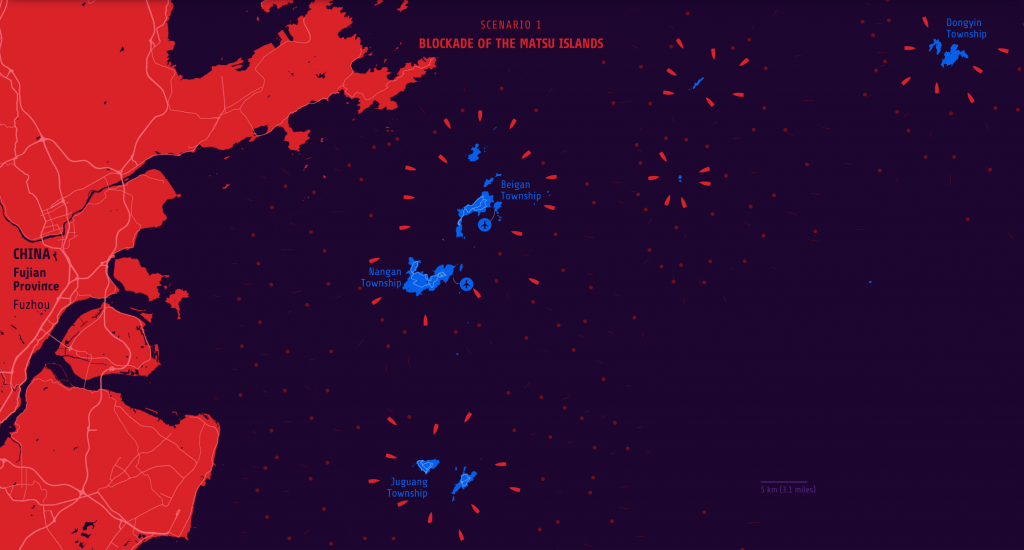 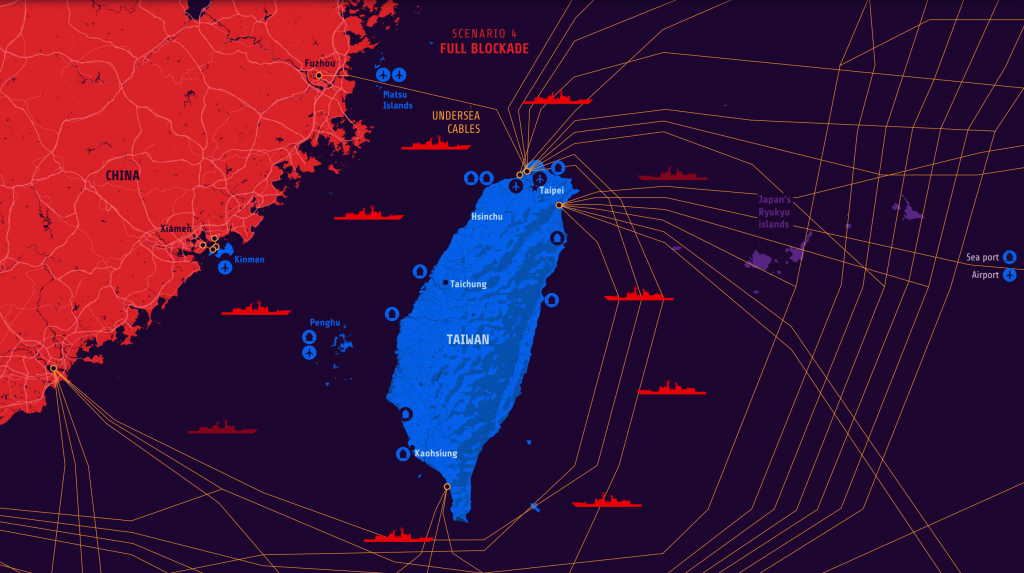 Full version of the story: https://www.reuters.com/investigates/special-report/taiwan-china-wargames/