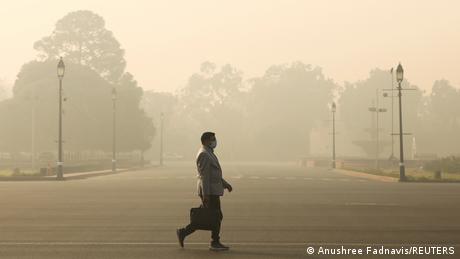 Air pollution levels shot up to dangerous levels in New Delhi on Friday morning after Diwali night, according to the federal air quality index.

A barrage of firecrackers exploded in the sky that night to celebrate the festival.

Delhi had banned firecrackers during Diwali in September given Delhi's poor air quality.

Every year, India's top court and other authorities ban firecrackers during the occasion. But experts say they've to be fiercely implemented since people end up defying the ban.

The National Air Quality Index (AQI) surged to 451 on a scale of 500 in Delhi, the maximum that was recorded this year.

This meant that conditions were "severe" enough to affect healthy people and seriously affect those with underlying conditions, according to the federal pollution control board's guidance.

The AQI measures the concentration of fine particular matter, which is known as PM2.5, in a cubic meter of air.

On Friday, the average concentration of PM2.5 in Delhi was 706 micrograms. For comparison, the World Health Organization's air quality guidelines deem anything above an annual average of 5 micrograms as unsafe.

Additionally, air quality worsens during this time because it coincides with the practice of stubble burning in the farmlands of Delhi's neighboring states of Punjab and Haryana.

Added to that, poisonous pollutants also remain trapped in the air as the windy monsoon season comes to an end and winter sets in.

Poisonous PM2.5 pollutants can cause cardiovascular and respiratory diseases such as lung cancer.

Around 1.67 million deaths were attributed to air pollution in India in 2019, according to the Lancet medical journal.

Almost 17,500 of those deaths were in the capital city.