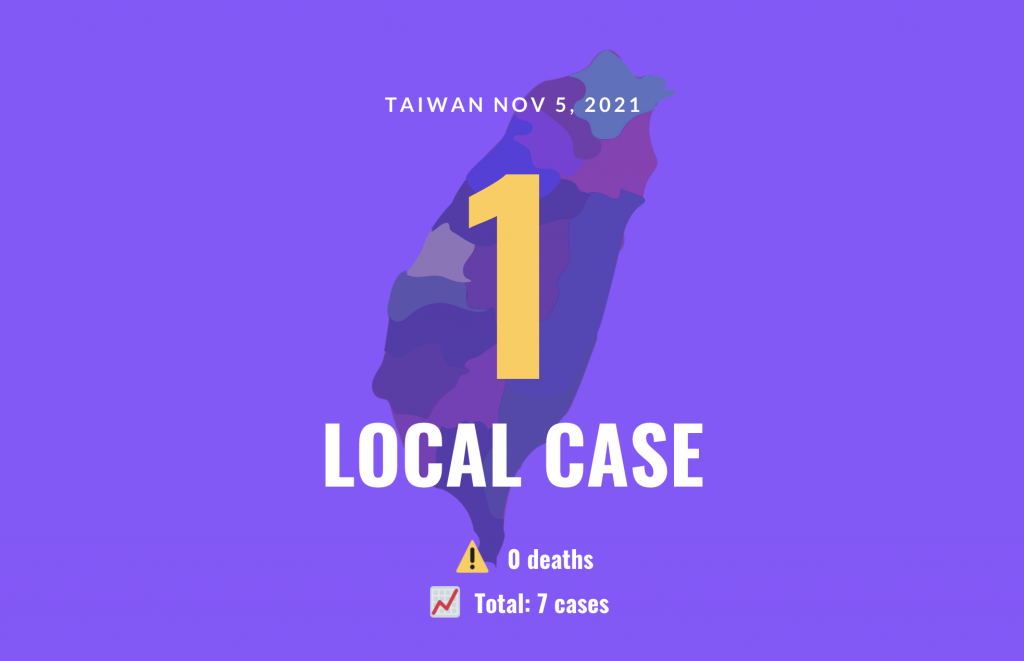 The sole local case reported on Friday, No. 16,547, is an Indonesian woman in her 30s who has been working in Taiwan as a caregiver for a long period of time. As she was accompanying a patient to a hospital, she was tested for the virus on Nov. 1, and the result was negative.

On Nov. 4, she underwent another test as her patient was transferred to another hospital, and she was diagnosed with COVID-19 with a Ct value of 40. The health department has identified five contacts, all of whom are in isolation.

Philip Lo (羅一鈞), deputy head of the CECC’s medical response division, said the woman had received one dose of the AstraZeneca vaccine in early September. Lo said that she tested positive for S (spike protein) antibodies, which the CECC believes are a result of the shot, but was not found to have N (nucleocapsid) antibodies.

Lo said that most people infected with COVID-19 develop both S and N antibodies, but about 10 to 20% of cases do not develop N antibodies due to a very mild infection. He said because the woman's Ct value was so high and there was no presence of N antibodies, her infection had likely been mild, but more testing will be necessary to get a clearer picture of the nature of her infection.

A total of 110 people have been removed as confirmed cases, while 14 cases are still under investigation. Up until now, 847 individuals have succumbed to the disease.

Of the 835 deaths from local infections, 412 were in New Taipei; 320 in Taipei; 29 in Keelung; 27 in Taoyuan; 15 in Changhua County; 13 in Hsinchu County; five in Taichung; three in Miaoli County; two each in Yilan and Hualien counties; and one each in Hsinchu City, Nantou County, Yunlin County, Tainan City, Kaohsiung City, Pingtung County, and Taitung County. The 12 other deaths were imported cases.