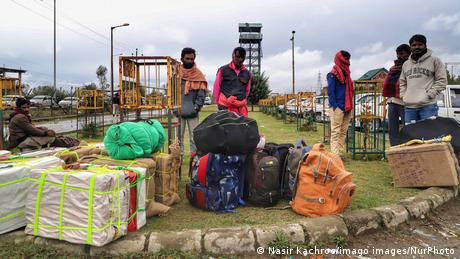 A recent spate of killings of migrant laborers in India-administered Kashmir has triggered a widespread emigration out of the region, shaking supply chains and bringing some industrial activity to a halt.

Fears of a demographic change among the Muslim-majority population are behind the killings in the region, which largely depends on a workforce coming from mainland India.

"The industrial output in Kashmir has come down by 80% after the emigration of laborers. Similarly, the construction and agriculture sectors have also been badly hit," said Nisar Ahmad Sheikh, vice president of the Federation Chamber of Industries Kashmir (FCIK), an apex body of industries.

At least five laborers were killed in October as part of a campaign by the pro-freedom militant outfits to kill outsiders for scuttling what they call New Delhi's plans to change the demography of the region.

A series of street shootings which took place last month were later claimed by The Resistance Front rebel group, which accused the victims of working for Indian security agencies.

Although economic mobility is the principal driver of migration, many laborers say they come to conflict-torn Kashmir because they get respect unlike what they face due to caste indignities in other parts of India. They also often earn around two times what they can earn back home.

Migrant laborers have become an integral part of Kashmir's economy, and work closely with the local population at industrial estates, construction sites, brick kilns and farms.

Militant groups, however, see these non-local laborers as agents of a demographic transition, following the 2019 abrogation of Kashmir's limited autonomy.

The workers have become soft targets of the militants because they are easy to kill and it sends a threatening message across India that outsiders are not welcome.

Upendra Sardar, 42, a worker from a lower-caste community in Supaul district in Bihar, has been coming to Kashmir for the past 15 years. He currently works for a cardboard manufacturer.

"We get more than double wages in Kashmir than what we get in Bihar. But more importantly here we are not subjected to the humiliation of belonging to a lower caste community. We are respected and treated as any other dignified human being," Sardar said.

He added that the non-local laborers have learned to insulate themselves from Kashmir conflict and politics surrounding it, helping them to integrate with the local community. However, Sardar himself has felt the pressure to leave, due to the killings.

"The local population is supportive but targeted killings and police restrictions on our movement forced us to leave," said Sardar, as he hurriedly placed his luggage in a vehicle carrying other laborers outside of Kashmir.

Sheikh, of the Federation Chamber of Industries Kashmir, said that non-local workers have played a major part in the region's industrial growth. "About 70% of our skilled labor comes from outside. They bring skills with them, and learn local crafts which proves to be profitable for our businesses," he said.

If the laborers stop coming to Kashmir, most of the construction works will stop, including the government's development projects, a government official told DW.

"All industries are functioning because of the skilled labor coming from outside. The government should provide them enhanced security so that they can work without any fear, and so their families feel secure," the official said.

The exodus of non-local laborers has stopped several construction projects and has badly affected Kashmir's horticulture sector, a major contributor to the economy. "We still haven't plucked apples from several of our orchards and you can expect snowfall anytime in November. It was delayed due to the shortage of non-local laborers," said Shameema Hassan, whose family runs a fruit business in northern Kashmir.

Masarat Jabeen, who owns a medical drugs manufacturing company at Lassipora, says she has trained local youth to replace the skilled non-local laborers. "In Kashmir, you expect these crises and that's why I am training and employing local youth to decrease dependence on outsiders," Jabeen told DW.

Some argue that the scrapping of Article 35A, which offered special privileges to residents of the state, has created a demographic paranoia in Kashmir, and that the militants are taking advantage of the situation.

According to official data, nearly 1.5 million outside laborers became eligible for local residency in Kashmir after New Delhi revoked the region's limited autonomy. Many more may also receive the domicile certificates within the next four years, after fulfilling the criteria of working in Kashmir for 15 years.

The People's Alliance for Gupkar Declaration (PAGD), an alliance of pro-India political parties in Kashmir, has called New Delhi's changes to the land and domicile laws in the region an answer to a "longstanding demand of the Hindutva elements, with an eye no doubt on altering the demographic composition of the only Muslim-majority state in the country, rather like what Israel is doing on Palestinian lands."