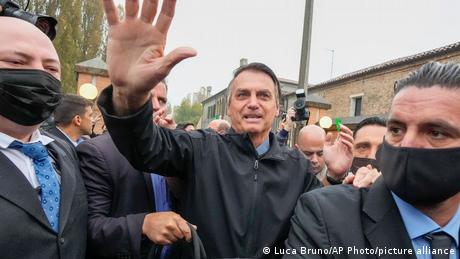 Brazilian President Jair Bolsonaro visited the northern Italian town of Anguillara Veneta on Monday, where he was granted honorary citizenship during a ceremony.

Some of Bolsonaro's ancestors came from the town of around 4,000 inhabitants, which is situated about 45 kilometers (27 miles) southwest of Venice.

What happened during the visit?

"I am happy and touched to be here," the 66-year-old Brazilian leader said during the visit, according to the Italian ANSA news agency. The Brazilian president was protected by a heavy security detail.

Supporters of Bolsonaro attended the event, and around 200 protesters also showed up. The demonstrators carried signs with slogans such as "No citizenship for dictators" and "Anguillara loves Brazil but not Bolsonaro."

"It's okay for him to visit the city where his family comes from, but not for him to be presented as a role model, granting him honorary citizenship," city councilor Antonio Spada told the AFP news agency.

Ahead of the event, the slogan "Bolsonaro Out" was spraypainted on Anguillara Veneta's town hall last week. The town's right-wing mayor, Alessandra Buoso, has condemned the act of vandalism and said the honor ceremony was not about politics, but about recognizing Italian emigration to Brazil.

The visit to Anguillara Veneta follows Bolsonaro's trip to Rome, where he took part in the G-20 summit. Bolsonaro is expected to meet with far-right firebrand Matteo Salvini on Tuesday, who previously served as Italy's interior minister and deputy prime minister.

The Brazilian leader has previously made numerous homophobic and sexist comments and praised the South American country's previous military dictatorship. Destruction of the Amazon rainforest has increased dramatically during his time in office, with Bolsonaro also frequently downplaying the ongoing coronavirus pandemic.

A Senate panel in Brazil recently recommended Bolsonaro be hit with criminal charges over his handling of the pandemic. Under his leadership, the pandemic has disproportionately impacted the country's indigenous and Afro-Brazilian population, with the national death toll from the virus exceeding 600,000 in total.