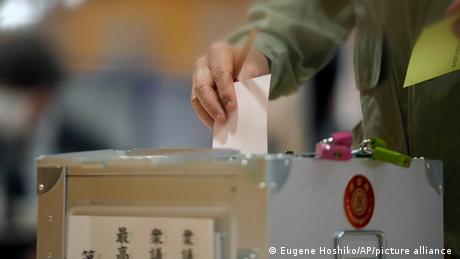 Voters in Japan headed to the polls on Sunday to elect a new lower house of the national parliament where Prime Minister Fumio Kishida seeks to maintain his party's majority.

The election is a test for the new premier who took over as the leader of the Liberal Democratic Party a month ago.

The LDP-led government has faced criticism for its mishandling of the coronavirus pandemic.

The new government will face the task of steering the world's third-largest economy battered by the pandemic, tackle a fast-aging and dwindling population and security challenges from China and North Korea.

Kishida called the election soon after taking the top job to shore up his mandate in the 465-seat lower house.

The LDP currently holds 276 seats, but opinion polls show it may be on the brink of losing its sole majority in the lower house for the first time since 2009.

While Kishida is expected to remain prime minister, observers say the ruling party will likely lose seats and may have trouble retaining its commanding majority.

The 64-year-old premier did not have a political honeymoon, with his approval rating lagging at around 50%, the lowest for a new administration in two decades.

He has promised to issue a fresh stimulus package worth tens of trillions of yen to counter the impact of the pandemic.

Stability or return to revolving-door era?

A weakened majority for the LDP could mean further losses in the upper house election next summer.

While the LDP has held power almost continuously since the 1950s, only five politicians have hung on to the prime minister's office for five years or longer.

A poor showing could embolden Kishida's rivals within the party, threatening to return Japan to an era of short-lived administrations.

The Constitutional Democratic Party of Japan, the biggest opposition group, is expected to gain seats but will be nowhere close to toppling Kishida's coalition.

Handling of the pandemic

There has been major public discontent over the government's response to the coronavirus pandemic.

Japan initially lagged behind other developed nations in the vaccination drive. But it soon caught up and now more than 70% of the population is fully vaccinated.

While infections have dropped sharply, some voters remain wary.

"It's hard to say the pandemic is completely snuffed out and society is stable, so we shouldn't have any big changes in coronavirus policy," said Naoki Okura, a doctor, after voting in Tokyo.

"Rather than demanding a change in government, I think we should demand continuity."