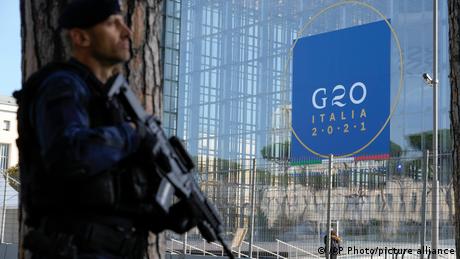 Finance and health ministers from the Group of 20 (G20) leading and developing economies are holding talks on Friday to discuss ways to put an end to the pandemic and kickstart a speedy economic recovery.

The gathering comes a day ahead of the leaders' summit set for October 30-31.

The G20 bloc, including countries like the United States, China, India and Germany, accounts for about 60% of the world's population and over 80% of global economic output.

The summit will be the leaders' first face-to-face meeting in two years. But to the disappointment of the host Italy, the leaders of China, Japan, Mexico, Russia and Saudi Arabia have declined to attend the meeting.

Still, Chinese President Xi Jinping and Russian President Vladimir Putin are expected to follow the discussions via a video link.

Top of the agenda is the pandemic and how to deal with its consequences.

The leaders are also expected to discuss efforts to speed up the global economic recovery, address soaring energy prices and supply chain snarls, which have affected a number of key industries worldwide.

G20 leaders will also sign off on a minimum global tax rate of 15% for big companies, a deal that was finalized earlier this month.

Furthermore, climate is going to be a major topic of discussion at the summit, which is being held just days before the United Nations COP26 climate summit in Scotland, set to begin on Sunday.

The bloc, which accounts for an estimated 80% of global greenhouse gas emissions, has been slammed by climate activists for not taking adequate action to curb the emissions.

G20 leaders will pledge to take urgent steps to reach the goal of limiting global warming to 1.5 degrees Celsius, according to a draft communique, reported Reuters.

The situation in Afghanistan after the chaotic US withdrawal, which irritated US allies, from the war-ravaged country could also come up for discussion, particularly when US President Joe Biden meets European leaders on the sidelines of the G20 gathering.

Ahead of the summit, Women Political Leaders, a global network of female political leaders, released a statement calling on the G20 leaders to ensure the safety and security of Afghan women leaders.

"Afghan women politicians are not only being sidelined from participation, they are also suffering threats and violence," it said.

The body stressed that the G20 should set up a mechanism to monitor the situation of women's rights in the conflict-stricken nation and hold the Taliban responsible and accountable.

Protesters have planned multiple rallies in Rome for the time of the G20 meetings. A demonstration is taking place on Friday where mainly young students in their teens are taking part. DW reporter Marina Strauss who is Rome said that the students she spoke to want the G20 leaders to finally act on climate and have more ambitious goals.

She added that Friday's march is just a kick-off for the much bigger protests planned for Saturday.

A protest by the Rifondazione Comunista communist party is scheduled for early Saturday afternoon and shortly afterwards, a march including climate initiative Fridays for Future and trade unions is to take place. About 10,000 participants are expected.

Authorities have stepped up security in the city.

The arrangements include a large police presence with additional reinforcements from the military. The Interior Ministry has said between 5,000 and 6,000 police along with some 500 soldiers will be deployed to ensure security.

Large parts of the district surrounding the congress centre that will host the summit are being cordoned off from Friday and no one will be allowed to enter without special permission.

Airspace will be closed over Rome and border controls will be enhanced to try to keep away potential troublemakers.

DW reporter Strauss said that Italy wants to avoid the protests from getting out of hand.

In 2001, on the sidelines of the G8 summit in Genoa, a 23-year-old Italian student Carlo Giuliani was shot dead by a police officer during a street fight.

That incident is still very vivid in Italy and that explains the massive security precautions put in place, said Strauss.